Leading The Resistance: eBaum’s World Is Offering Exclusive Access To An Unreleased ‘Salad Fingers’ Episode For Anyone Who Brings Them The Scalp Of A Nazi 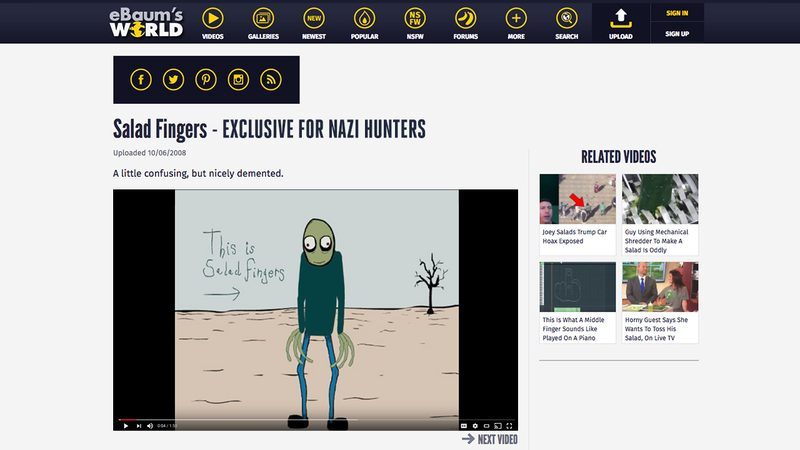 Okay, this is seriously awesome.

Every day, more and more companies commit themselves to resisting the despicable racism America saw white nationalists preaching in Charlottesville two weekends ago. However, one business in particular has taken the lead in demonstrating how companies can effectively pledge their resources to the cause: EBaum’s World is offering exclusive access to an unreleased Salad Fingers episode for anyone who brings them the scalp of a Nazi.

Incredible. EBaum’s World is single-handedly setting the pace for how businesses can help fight fascism!

The long-running viral-content website announced on its homepage today that any user who mails or hand-delivers a detached Nazi scalp to its San Francisco headquarters will be granted access to a never-before-seen installment of the popular mid-2000s webseries Salad Fingers. Each scalp will have to be verified as a genuine Nazi before a download code will be issued to the scalper to prevent people from scalping non-Nazis then shaving a fascist haircut into the scalp.

“We can think of no better reason to release this treasure of the eBaum’s World vault than as motivation for people to tear the scalp off a neo-Nazi’s hate-filled skull,” read the statement. “Now is not the time to remain neutral. By collecting these trophies off the heads of racist, sexist, homophobic, anti-Semite scum, eBaum’s World hopes to wield this unseen Salad Fingers episode as a tool for promoting American diversity and unity.”

“We won’t give too much away, but let’s just say some rusty spoons make a cameo appearance in this exclusive ep. So get out there, vigilantes!” the statement concluded.

With initiatives like this one paving the way for progress, hate doesn’t stand a chance.

Though no one should need to be incentivized to push back against Nazi ideology, rewarding those who scalp Nazis is a tremendous gesture on the part of eBaum’s World to prove just how far it’s willing to go to defeat hatred and bigotry.