The Future Is Here! Elon Musk Stuck A Guitar Cable In A Dolphin’s Brain And Had Carlos Santana Play A Solo Into It And The Dolphin Died Instantly 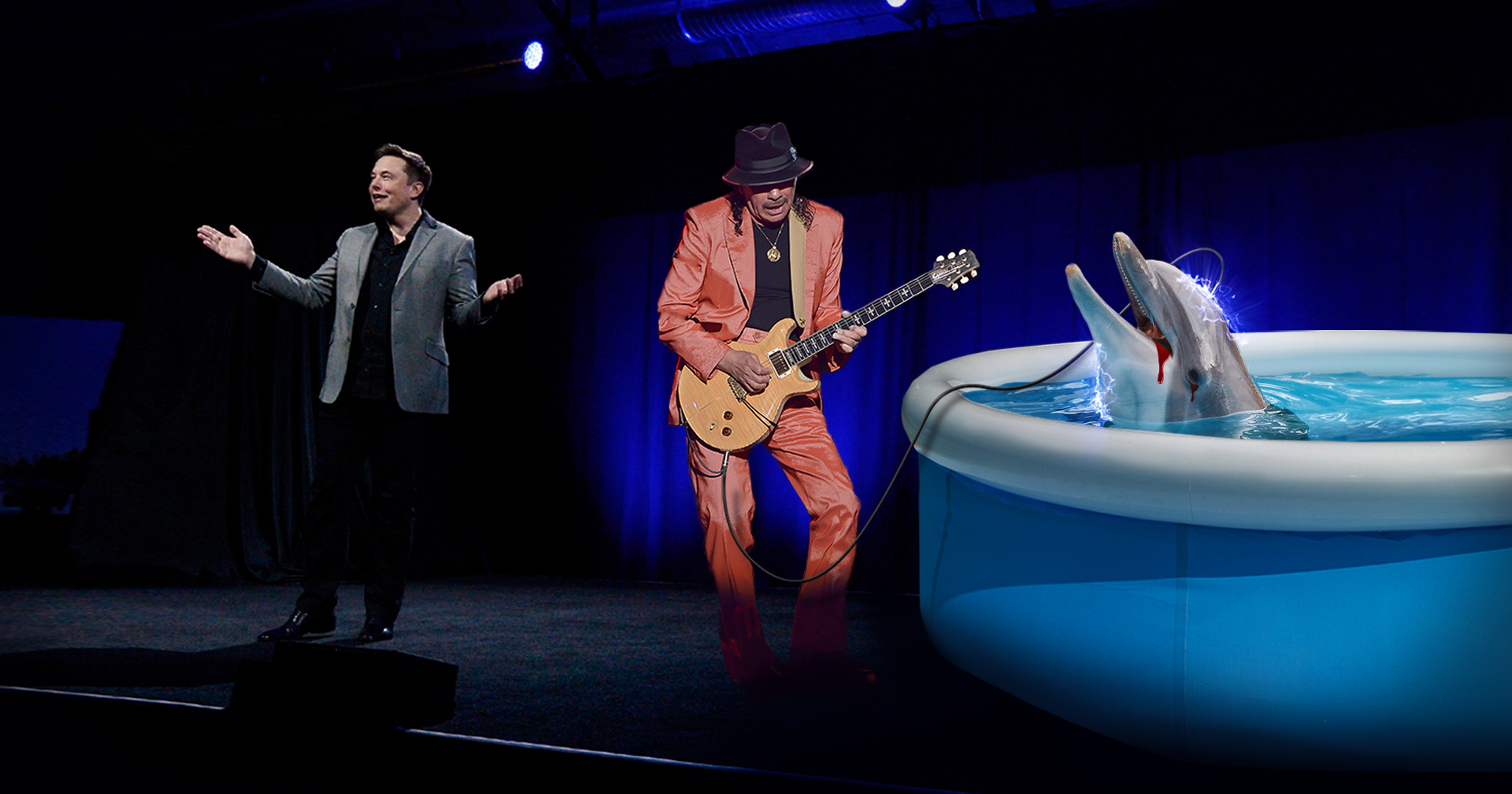 From Tesla to SpaceX, Elon Musk has been one of the leading innovators of our age—a modern-day Thomas Edison ushering mankind toward a better future. And now, he’s once again proven himself as one of the most brilliant minds of the 21st century: Musk just stuck a guitar cable into a dolphin’s brain and had Carlos Santana play a solo into it and the dolphin died instantly.

Incredible! A true visionary unlike anyone else alive right now.

This morning, at a hastily arranged press conference, an energetic Musk took the stage alongside a large, wet object that was audibly wheezing beneath a tarp. Musk then excitedly announced that he’d devised his most extraordinary innovation yet, one that would change the world forever, at which point he then dramatically pulled the tarp away, revealing a weak and dying dolphin gasping pitifully on the stage floor. The crowd then instantly burst into applause, only to moments later be brought to a fever pitch as Musk welcomed 74-year-old music legend Carlos Santana on stage.

The guitar icon waved to the crowd as he strode out to join Musk, after which he picked up an electric guitar and then labored to plug it into the dolphin’s brain, struggling mightily to jam the cable into the animal’s dense skull as it shrieked and thrashed about. Once the guitar cable was firmly inserted into the dolphin’s brain, Santana turned to the audience, closed his eyes, and began passionately soloing. Though the audience couldn’t hear Santana’s shredding at all, seeing that the guitar was connected to an animal’s brain instead of an amplifier, everyone quickly understood the profound effect Santana’s guitar playing had on the dolphin, as within moments its panicked cries and convulsions quieted, its body suddenly limp and unmoving.

As Santana continued playing, the dolphin’s vital signs, which were being monitored in real-time on a large screen behind Musk, soon flatlined entirely, prompting the audience to erupt into a full-on standing ovation. Musk then walked over to the lifeless dolphin and raised his arms in triumph, clearly proud to have once again ushered in a world-changing innovation.

“With just an electric guitar and a dolphin, today we have entered a new technological age, bringing humanity into an uncharted frontier where the instruments of man come together with the most intelligent of animals, leading us to a brighter tomorrow unlike anything previously imagined!” shouted Musk over the crowd’s deafening applause, jabbing the unbreathing dolphin with a mop handle to demonstrate that it was no longer alive. “After today, anyone with access to a dolphin and a guitar can re-create exactly what happened here on this stage, and can do so knowing the dolphin will die every time! Anything you dream is now possible, and this dolphin is proof. The future is here, and it is in your hands!”

Within minutes of the news breaking about Santana killing the dolphin with a guitar solo, stocks for Neuralink, Tesla, SpaceEx and Dogecoin all skyrocketed, confirming the public’s reinvigorated confidence in Musk’s entrepreneurial genius.

How unbelievably cool! We literally had to double-check if it was the year 2022 or 3022, because it sure does feel like the future has arrived! Only a visionary of Musk’s caliber could single-handedly usher in a new technological era like this. Here’s to you, Elon! We can’t wait to see what you invent next!