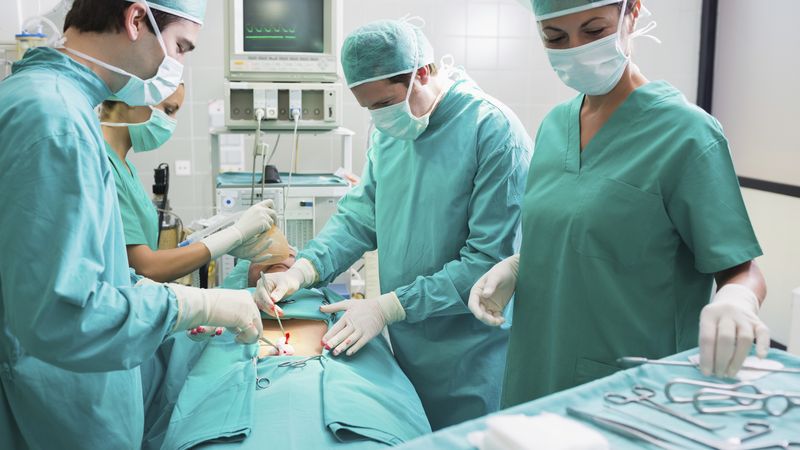 I have a lot of really solid ideas for my upcoming appendix surgery, but my doctor says he won’t use any of them because apparently patients don’t have any say in what happens to their body. They’re good ideas, and they’re here if anyone else can use them.

1. Make my appendix into a tiny third lung: According to the brochure I read, the appendix is a small, fleshy pouch connected to the intestines. Since lungs are basically just bigger fleshy pouches in the chest, I figure we could just attach the appendix to the lungs with an air hose, and then I’d have an extra little lung. It would be great because I wouldn’t run out of breath as much.

2. Use one of those ultra-precise surgery robots from the news: You know the ones I’m talking about. They’re super accurate, and I remember hearing on TV that they never make mistakes. We could just get one of those to do the surgery.

3. Give my appendix to a cat to wear as a helmet: It’s probably stretchy enough to fit any cat’s head perfectly, and it could help protect a cat from everyday dangers like hail or garage doors closing on their skull.

4. Give my guts a good wipe-down with paper towels: While you’ve already got me split open, you might as well take some paper towels and wipe all the crud off my guts. I don’t think they’ve ever been cleaned before.

5. Just melt the appendix and let my body absorb it for nutrients: Instead of just hacking the thing out and letting it go to waste, you could melt it down with a blowtorch, and then my body would naturally absorb all of the good vitamins and nutrients it contains.

6. Don’t let any blood out: Whenever I see surgeries on TV, there’s always blood spilling out everywhere. But I think that blood is important, and I would appreciate it if you could make sure that none comes out of me.

7. Rub the appendix with hand sanitizer and crushed-up Tylenol first to see if it can be fixed: If your car was having some engine problems, would you try to get it fixed, or would you just throw it in the garbage without ever finding out what’s wrong? Obviously, you’d try to fix it, so why not do the same thing with my appendix? Just use some Purell to kill all the dangerous germs and toss in some Tylenol to bring down the swelling. If that doesn’t fix the problem, then maybe you consider hacking it out. But only as a last resort.

8. Put everything but my arms under anesthesia in case I need to do any chores during surgery: Look, I’m a busy man, and while I’d love to have a whole free afternoon to just snooze away while my appendix is getting removed, there will probably be some tasks that pop up that I need to attend to. I don’t want them to just pile up.

9. Suture the appendix to my chest so that I can have a pocket: This would be incredibly useful because I’d have a permanent pocket on the outside of my skin where I could store my ChapStick and coins and Altoids. I would keep it very clean so that it wouldn’t stink.

10. Fumigate my kitchen: I have thousands of wasps infesting my kitchen, so instead of cutting out my appendix, we could just go to my house and set off some insecticide foggers in there to kill all the dangerous pests.

11. Make the incision so that it looks like the Yankees logo: This would make for a very cool scar that I could show to my friends when we’re watching sports.

12. If there are any med students in the room observing, tell them I’m getting my appendix taken out because there isn’t enough room for all my muscles: They would think this is very cool, and it would make them excited to become doctors.

13. Stuff the appendix with cut-up hot dogs, submerge me in a lake, and let the fish eat it away: I am very into natural, organic living, and this hot-dog-and-fish approach would be a great way to harness the power of nature to take care of my appendix issue. In surgery, they pump you full of artificial chemicals and ingredients, and, honestly, that could end up being more harmful than the appendicitis itself.

Alas, thanks to my incredibly dismissive doctor, all of these gems fell on deaf ears. Had I known he was just going to be calling all the shots without any input from me, I never would have spent the time writing these all down. I’ll bet that surgery robot probably wouldn’t have dismissed them all out of hand. Oh well. Live and learn.