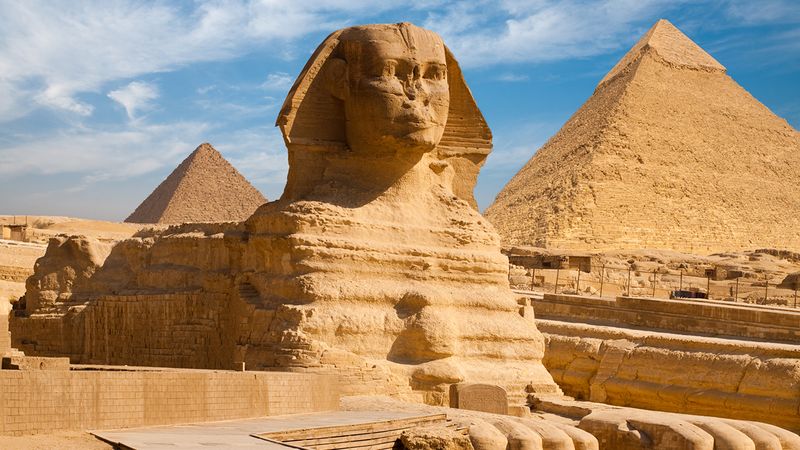 You might have learned about the pyramids back in high school, but chances are, you never learned about stuff like this. So buckle up, because these 20 facts about ancient Egypt will absolutely BLOW your MIND!

1. In order to move the large, heavy granite slabs that were used to build the pyramids, the ancient Egyptians had to rent a van.

2. King Tut died at the young age of 19 when a camel kicked him off the top of the Sphinx.

3. The only two jobs in ancient Egypt were slave and camel doctor.

4. Ancient Egypt was one of the first civilizations to practice gender equality, allowing women to join the workforce in roles such as prostitutes, concubines, and whores.

5. During mummification, ancient Egyptians would remove a person’s organs and throw them into a big trash bag labeled “guts.”

6. If you look closely, most hieroglyphs are just drawings of cars.

7. In 1504 B.C., a dumbass pharaoh named King Amenhotep killed more than 20,000 ants to take them with him to the afterlife for some reason.

8. This is an example of a common trap that ancient Egyptians would put in their tombs to protect it from intruders:

9. The inscription on King Tut’s crypt reads “Welcome to my cryt. Please notice there is no ‘P’ in it. Let’s keep it that way!”

10. The pyramids were originally built so that pharaohs would have something to ramp their motorcycles off of.

11. Ancient Egypt was the first civilization to laminate its dead.

12. If God sat on one of the Egyptian pyramids, he would leap up and scream, “YOWZA!”

14. While the Nile River is the longest in the world, only about 30 feet of it are interesting.

15. One time a pharaoh threw up because he saw a camel lick a pyramid and moan.

16. Pharaoh Khufu commissioned the Great Pyramid of Giza so that he could have somewhere to store his extensive sneaker collection.

17. Benjamin Franklin visited ancient Egypt once. In fact, it was the hot Egyptian sun that gave him the idea for the lightbulb!

18. By the time he died, King Tut had ingested more than five pounds of sand from constantly trying to make out with statues.

19. After using advanced forensic facial reconstruction techniques to analyze the Sphinx, scientists have determined that this is what the pharaoh actually looked like: