23 Things Guaranteed To Happen At Every Music Festival 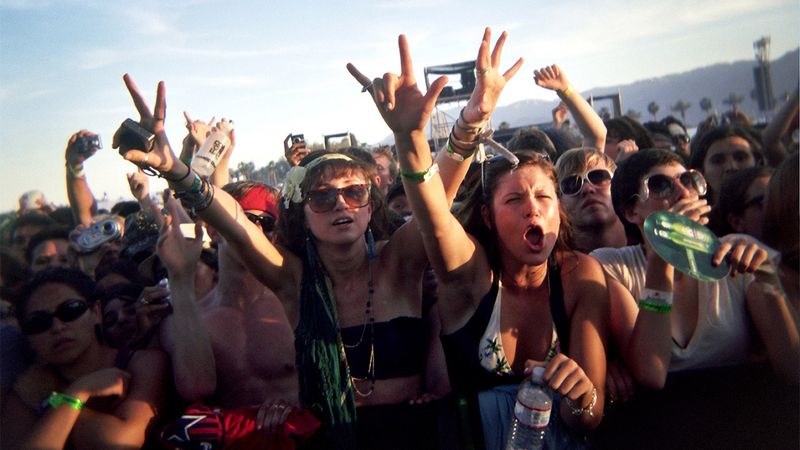 Going to a music festival can be equal parts exhilarating/incredible and exhausting/terrifying. Here are 23 things you’ll definitely see at the next music festival you attend.

1. You’ll have to wait in line for an hour just to play lead guitar.

2. You’ll see a barely alive dolphin being volleyed around a crowd like a beach ball.

3. Someone will try to sneak their own mosh pit into the festival and get thrown out.

4. Yep. You’re gonna see this couple at some point:

5. A fight will break out between a guitar fan and a bass fan.

6. Everyone will sneak their drugs in no problem, but you’ll get arrested for pretending to play a cigarette like a recorder.

7. The smoke from many different joints will converge in a giant moose-shaped cloud, which will angrily stampede around the festival grounds vomiting scalding brown tar onto those who don’t seek cover.

8. Some idiot will rush the stage and this will happen:

9. The security guys will cordon off the area in front of the stage for an all-security-guy mosh pit.

10. Jeff Tweedy will frantically, desperately try to explain to the audience that he didn’t write Yankee Hotel Foxtrot and has no idea who did, but his pleas for help will be drowned out by the sound of people demanding that he shut up and play “Heavy Metal Drummer.”

11. The Garage Assholes, the worst band in the world, will sing one of their unpopular songs about the joys of touching other people’s food.

12. You’ll see someone crowd surf onto the stage to serve a singer divorce papers.

13. When you dance, you think you’re going to look like this:

14. Eight bands that all independently thought of the name Hell’s Belfry will fight each other to the death to determine which band is the true Hell’s Belfry.

15. You’ll stand in line for so long that you’ll miss your favorite band and the music festival will end and America as we know it will be a long-forgotten blip in the interminable history of ruined civilizations, and as the buildings of some perverse city far into the future crumble all around you, post-apocalyptic farmers armed with spears carved from human bones will forcibly drive you from where you stand on the only remaining patch of arable land on a carbon-choked, ash-covered planet that is hurtling straight toward the sun.

17. A guy will try to sell you Nebraska.

18. You won’t be able to walk five feet without bumping into a guy who dressed up like Bruce.

19. Some huge guy will put his girlfriend on your shoulders and sob, “Be good to her.”

20. You’ll see cleavage and then spend hours futilely searching for a policeman to report it to.

21. You’ll bump into your parents as teenagers, and they will panic and take cyanide pills.

22. A guitar will be used to gesture to where the porta-potties are.

23. You’ll get kicked out for saying “Guitars are just not my cup of tea!”