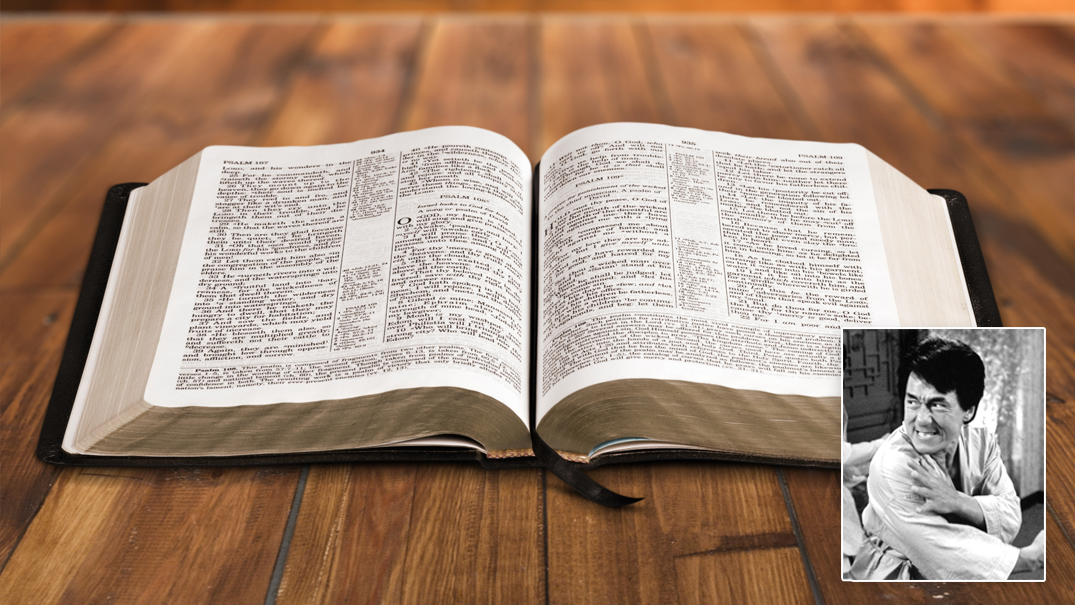 You don’t have to be a genius to see that Jackie Chan would have seriously altered the course of most of the Bible with his trademark antics and kung fu. Here are three Bible stories in particular that would have gone very differently if old Jackie Chan had rolled into town.

2. The birth of Christ: Given how many golden opportunities there are for stunts in a manger, there’s basically no way Mary would have paid attention to the baby Jesus if Jackie Chan had been there to let loose with his signature acrobatics. You just know a born entertainer like Jackie Chan would have blown everyone’s mind by doing a bunch of highly skilled dives back and forth through a tiny little window in the manger, and Mary and Joseph and the Magi, they’d just be hooting and hollering for Jackie to flip through the basketball-size window again, and he’d do it and Mary would be completely losing her shit over it and she just would not care at all about the Son of God she’d just given birth to because Jackie Chan is a one-of-a-kind kung-fu showman. And Mary would definitely have covered up the baby Jesus with hay and said, “I’m burying my new son underneath a bunch of hay because he’s distracting me from Jackie Chan.” Mary probably would have forgotten all about Jesus right then and there and just left him underneath a big pile of hay so she could keep watching the unparalleled stunts of Jackie Chan. That’s exactly how it would have gone if Jackie Chan were there.

3. The resurrection of Lazarus: People always love to talk about the Bible story of bringing Lazarus back to life, but if Jackie Chan had been there it’s pretty obvious that as soon as Christ had raised Lazarus from the dead, Jackie Chan would have burst into the room and shouted something like, “I don’t think so,” and snapped Lazarus’ neck using his deadly martial arts. Christ almost certainly would have said something like, “That is fucking rad, Jackie Chan. I want to see you kill Lazarus again,” and then Christ would have brought Lazarus back to life for a second time and Lazarus would have said something like, “Hell yes, I’m back from the dead. Jackie Chan, I need you to kill me once more using your awesome kung-fu moves,” and Jackie Chan would 100 percent have killed Lazarus with kung fu and everyone would have cheered. It’s safe to say that Jesus would have kept reviving Lazarus over and over so that Jackie Chan could keep killing him while Jesus and all the apostles applauded. It’s just yet another example of how Jackie Chan could have changed the whole Bible.