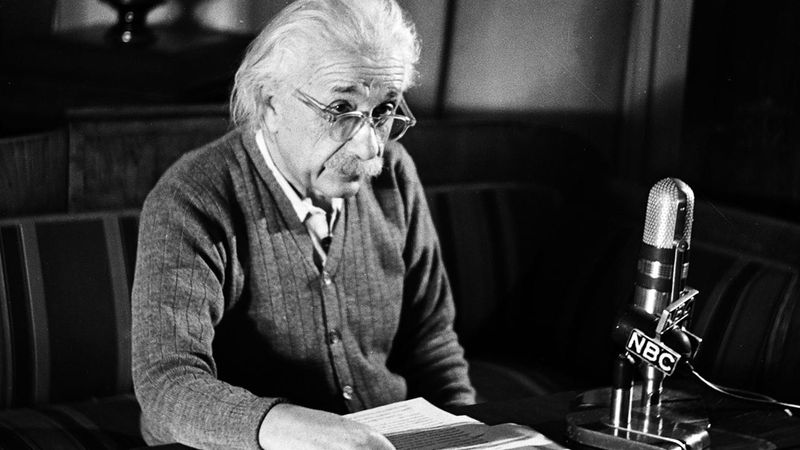 Was the greatest thinker of the 20th century just as much of a genius when it came to making predictions about this year’s biggest movies? Yes and no!

1. “The Monuments Men has post-Oscar-season dump written all over it.” (‘Unified Field Theory Of Gravity And Electricity,’ 1931)

Right: While George Clooney’s latest directorial effort may have had an Oscar-worthy ensemble of heavyweights and a nifty historical premise, Einstein recognized, far ahead of his peers, that the emperor had no clothes. He was validated when Sony pushed back the film’s release from the highly competitive Oscar season to die a quiet death in February—just as the father of the atomic age predicted.

2. “Marvel is overreaching with Guardians Of The Galaxy…They’ll never recoup the marketing alone.” (Longhand manuscript for Yale University Library, 1930)

Wrong: While the 20th century’s most formidable mind did accurately predict that brand momentum and star power would make Captain America: The Winter Soldier a “solid hit,” the theoretical physicist simply could not have foreseen the mass appeal of Marvel’s late-summer blockbuster, much less its record-breaking $94 million August opening. Even geniuses make mistakes.

3. “Audiences will be ready to root for Godzilla again.” (Personal correspondence, 1955)

Right: A controversial statement, especially in its day, but the genius behind the theory of general relativity nonetheless predicted that a relative newcomer, director Gareth Edwards, could channel his best Spielberg to give us the straightforward Godzilla reboot we needed to wash the taste of the 1998 Matthew Broderick remake out of our mouths. This would be Einstein’s last known writing, dated one week before his passing.

Wrong: While few critics cite The Grand Budapest Hotel as Anderson’s best, his latest quirky ensemble piece received one of his widest theatrical releases ever at nearly 1,500 screens (only Fantastic Mr. Fox had more). You don’t need to be the greatest physicist of your generation to do that math: More screens = more ticket sales, leading the fantastic Mr. Anderson to his first $100 million worldwide hit.

Right: Maybe it’s the fact that millennials are the ones now writing movies for other millennials to take their kids to. Or maybe Phil Lord and Christopher Miller (also the minds behind the 21 Jump Street franchise) are just that good. Either way, Albert Einstein predicted, long before conventional wisdom caught up with him, that all-ages humor and catchy music would make The Lego Movie a surprise box-office juggernaut. “Everything is awesome,” indeed.

Wrong: 2011’s Rise Of The Planet Of The Apes was a surprise hit, nearly cracking half a billion dollars worldwide. But Einstein could not foresee a sequel that embraced some of the sillier aspects of the franchise (talking apes, a planet overgrown with jungle) as resonating with modern audiences, even asking rhetorically, “Why don’t they just let this one die?” With Dawn Of The Planet Of The Apes poised to overtake its predecessor, at least Al has that Nobel Prize to fall back on.