4 Episodes Of ‘Diners, Drive-Ins And Dives’ Where Guy Fieri Took A Bite Of A Meal, Instantly Vomited, But Then Still Called The Chef A Culinary Gangsta 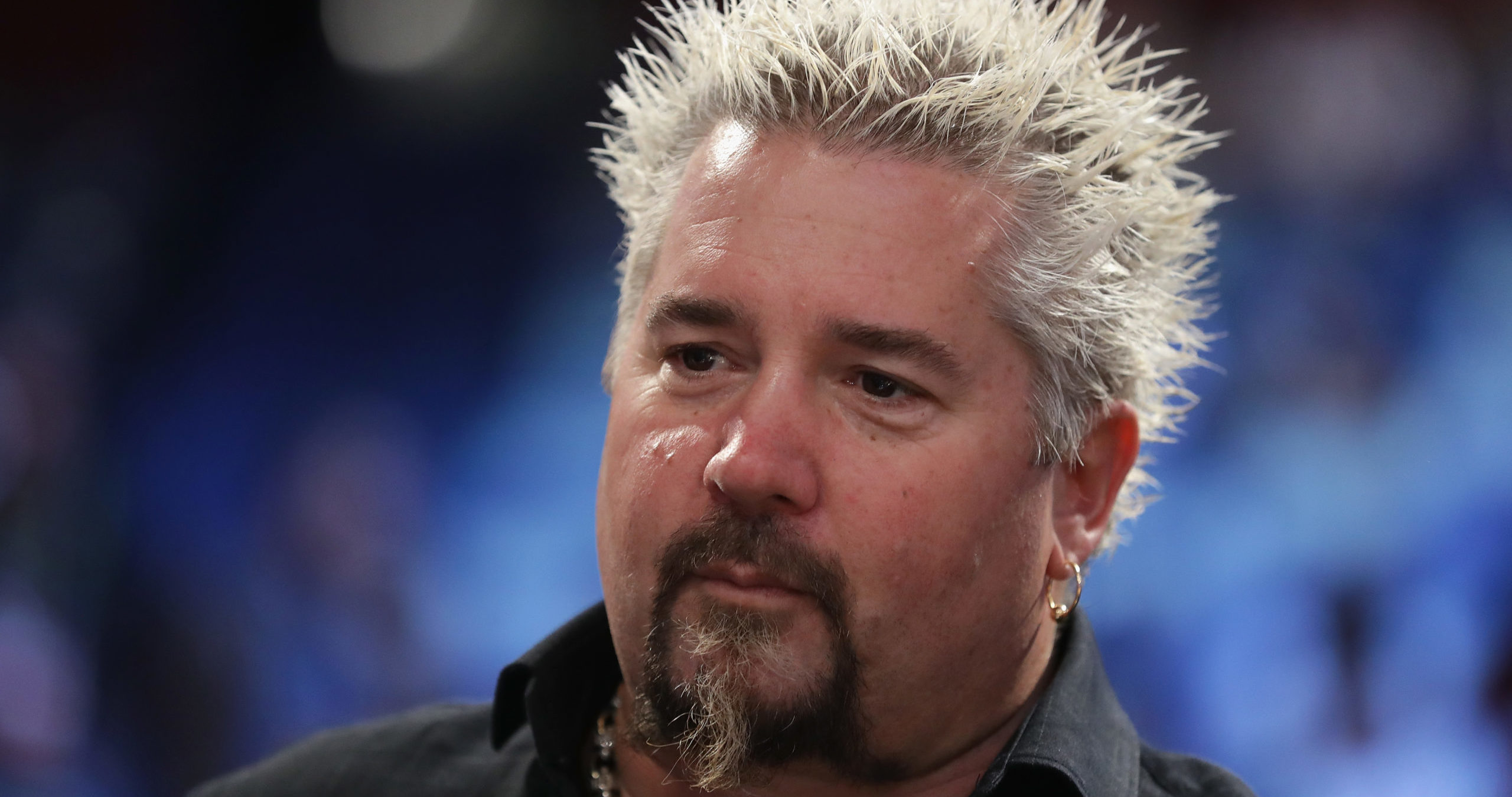 Since first gracing our televisions nearly 20 years ago, Guy Fieri has made his over-the-top first bite reactions the stuff of legend, but that’s not to say every one of his hyped-up compliments is totally genuine.

1. Season 4, Episode 7: “Lemme Get A Pizza That Awesomeness”

If you’re a fan of DDD, you know that Guy Fieri exudes nonstop positive energy just about every time he steps foot in a new restaurant, and his visit to Earl’s Pizzeria in Brick, New Jersey was no different. From the moment he walked in, Guy was already calling the décor “next-level,” even though it was just those old-looking framed posters of Venice canals that every pizza place has, and he immediately beelined over to the jukebox and excitedly asked the owner, “Dude, this is amazing, where the heck did you get this?” and when the owner said that he just got it online after Googling “jukebox for sale,” Guy dapped him up and called it a “legendary move.” All this to say, there was no way anyone could’ve foreseen the fucked up twist that was coming. When the food finally came out—a specialty Nutella pizza that still had a traditional cheese base—Guy took a huge bite and moaned with pleasure while shaking his head in that “Wow, I can’t believe how good this is” sort of way, only to then suddenly vomit all over the front of his shirt. It was such a puzzling thing to happen, considering all Guy had done to that point was go apeshit over how amazing the place was. After a few moments, the chef began confusedly apologizing before Guy loudly exclaimed, “Okay, YOU my friend are a culinary gangsta. This is insane. Sometimes I spit up a little bit like a baby because of this migraine medicine I take, but that’s beside the point, because this pie is epic. I’m gonna box it up and take it home to my kids.” In the end, it was honestly pretty tough to tell if Guy was lying or actually liked the food or hated it or what, but overall he was a good sport about everything.

Guy did himself no favors by showing up to Duckworth’s BBQ Haven in St. Louis with even more energy than usual. The dude was absolutely in the zone. When he arrived and met the owner’s elderly mom who worked in the kitchen part-time, he charmingly said, “Well, if the food is as beautiful as you, I’m in good hands,” then gave her this big bear hug as everyone laughed. Then he went on a good three-minute rant about how “sick” it is that all the chefs in Duckworth’s wear hats instead of hairnets, then another three-minute rant about how “awesome” the workplace chemistry felt after finding out that two of the dishwashers were brothers. Soon enough, though,the food came out—a nontraditional BBQ brisket lasagna—and all that positive energy went out the window. You could tell immediately that Guy simply wasn’t fucking with this meal. Sure, he said his standard hype lines, like, “Oh my, put this thing in the Louvre,” and, “When I finish this, can I have a second for dessert, please?” but it was in a super monotone voice as he ran a hand through his hair. And when he took that first bite—the chef and his mom both excitedly looking on, basking in their big moment on TV—Guy instantly vomited all over his shirt and the floor. He barfed for a solid 10 seconds, and all the while the mom and her son were profusely apologizing. But then Guy stopped barfing, wiped his mouth with the back of his hand, and said with absolutely zero conviction, “Okay, you my friend are a culinary gangsta. I spit up on myself sometimes like a baby due to this bad football concussion I got in junior high, so don’t worry about that. I’m gonna box this up and take it home to my kids.” Obviously, everyone could tell Guy was lying like a motherfucker and hated the food. The mom just stormed out of the kitchen looking all annoyed and the credits rolled.

Guy brought his trademark enthusiasm once again to this season six food truck episode, but it wouldn’t last long. After popping by a Jamaican donut truck and raving to the proprietor about how the “rad vibe” of the Jamaican flag just makes him want to “kick back with a brewski,” the DDD host toured the inside of the food truck, and that’s when his mood did a total 180. Straight up, the place was absolutely disgusting, and Guy couldn’t hide his displeasure. Suddenly using a serious, non-TV voice that he probably uses when talking to his doctor or the bank, Guy just looked around for a while and said stuff like, “I don’t see any cleaning products” and “That dough shouldn’t be sitting out in this heat, that’s how salmonella happens” and “I’m seeing a lot of small white hairs on the floor, really hoping you don’t bring pets or anything in here, that’d be a serious problem.” Soon enough, it was time for Guy to eat the Jamaican donut, and you could see the dread all over him. He just silently stared at it for so long, like a Fear Factor contestant staring down a cockroach, then sighed a long-ass sigh, took a bite, and immediately threw up all over his shirt and the entire mise en place. He quickly hobbled outside and stood on a curb, hands on his knees, doing that I-think-I’m-gonna-throw-up, weird-breathing-hunch-position for a long time. Meanwhile, the chef, clearly feeling incredibly uncomfortable, did her best to deflect attention from Guy barfing by talking about the family recipes she uses, all while Guy groaned into his hot mic out of frame and muttered, “C’mon, Guy, get it together, you got this,” before vomiting loudly three more times. Finally, an ultra-pale Guy walked back into frame and gave the chef a half-hearted side hug before saying, “Okay, you my friend are a culinary gangsta. I spit up on myself like a baby sometimes because of a fluid imbalance in my ear. I have a tube in there that gets knocked out of place and that’s what that was, but that’s beside the point. I’m gonna box this up and take it home to my kids.” Guy then doubled over and dry-heaved for a good few minutes before the credits finally rolled.

Anyone with eyes could see that Guy Fieri was ready to hurl throughout his entire trip to Amos’s Olde Butcher Shoppe in Lancaster, Pennsylvania. From the moment he arrived in the dirt parking lot to see goats and pigs from the adjacent farm just roaming around freely like peacocks at the zoo, to when he shook the visibly dirty hand of the sweat-drenched Amish farmer who owned the place, Guy had that unmistakable “I may very well barf soon” face right from the get-go. Immediately upon walking inside, Guy blurted out, genuinely shocked, “Whoa, lotta children working here,” and he wasn’t wrong. There were, like, eight kids under the age of 14—eight, deadass, all of whom turned out to be the owner’s kids—doing hard manual labor around the joint, sweeping and cleaning and waiting tables and wearing traditional Amish garb that was making them sweat like motherfuckers in the July heat. Seeing this obviously upset Guy. He tried making conversation with one at one point, saying, “You’re a rad little dude for helping the family biz” and went in for a fist bump, but the kid just stared at him blankly, clearly not knowing what a fist bump was. The whole vibe was fucked up and sad, but it wasn’t until Guy saw the meat cooler when things went totally off the rails.

Full stop, Guy could not handle this meat cooler. In total disbelief, the DDD host just looked around at the pigs and cows skinned pink and hanging on hooks by their hooves for a long time, hands on his head like a pitcher who just got rocked for a walk-off grand slam, saying to himself over and over, “I didn’t know this was part of it, Jesus Christ, I swear I didn’t know.” Then he began peppering the owner with questions about the restaurant, but instead of the normal stuff about how long they’ve been in business or whatever, he got super existential, like, “Do you think your cows are aware that they’re being groomed for slaughter?” and “Do pigs experience the feeling of time passing, or the loss of their family members?” Things would come to a head shortly after that, when Guy’s meal was finally unveiled: some sort of weird smoked head cheese that is apparently an Amish specialty. Right when he saw it, the dude’s knees buckled and one of the Amish kids had to kind of catch him and lower him down into a chair while another Amish kid fanned him with a menu. Guy quickly tried to dismiss it as jet lag, but just moments later, after taking the smallest possible nibble of the head cheese, the poor dude lurched forward and unleashed a truly extraordinary geyser of barf, blasting everything in the vicinity with gray-pink chunks for well over a minute straight. It was easily the saddest scene in DDD history. Eventually, once fully emptied of barf, Guy managed to collect himself, dap up the owner, and hoarsely whisper, “Okay, you my friend are a culinary gangsta. I spit up on myself like a baby sometimes because I have sickle cell disease, and that’s what that was. But that’s beside the point. I liked this. I’m gonna box it up and take it home to my kids.” Guy was already heading for the door by the end of that sentiment, though, so the audience didn’t get to see the Amish folks’ reactions to Guy’s terrible lies or anything. Instead it was just a tracking shot of Guy walking back to his car looking like he had a lot on his mind before the episode cut to black.