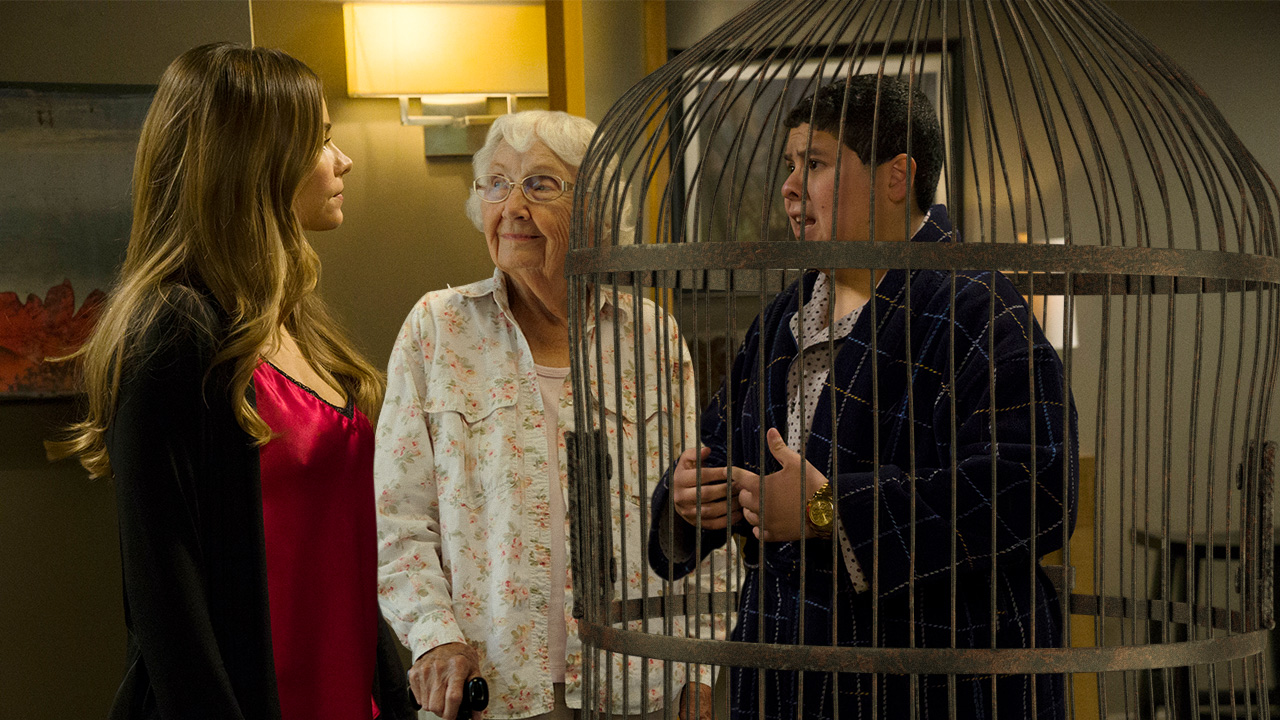 Modern Family has given us so many wonderful memories over the years and it’s always great to go back and revisit some of the greatest moments of this unforgettable show. Here are the four episodes of Modern Family where Manny Delgado decides to marry a 90-year-old woman who kept him in a birdcage, and his parents, Jay and Gloria, have to force him to get a divorce.

In this holiday episode, the Modern Family characters are sitting around the Christmas tree talking about Jesus Christ when they hear a knock at the door. When they answer it, they see an extremely elderly woman standing on their porch holding up a birdcage with Manny inside of it wearing a Santa Claus hat. “Allow me to introduce my very old wife,” Manny says from inside his birdcage. “We were just passing through the neighborhood and thought we’d give you your Christmas present.” Manny then reaches through the bars of his birdcage and hands Jay and Gloria a box of condoms.

Needless to say, Jay and Gloria are not happy about this at all, and Gloria says, “Manny, you better get divorced from that elderly woman this instant, or I’m going to send you to military school.” Manny doesn’t want to go to military school, so he gets divorced, but he spends the rest of the episode moping in his birdcage.

This episode begins with the family attending Alex Dunphy’s cello recital. It quickly takes a dark turn when Jay gets a phone call from The New York Times in the middle of the performance telling him that his son Manny has married another very old woman and is living in a birdcage in her home. Jay is forced to leave the cello recital and drive to the old woman’s house, where Manny is sitting in a birdcage hanging from the ceiling while the old woman he married looks at his face through a pair of binoculars, even though she is only standing a few feet away from him.

“Manny, get divorced from that old woman who is your wife this instant!” Jay screams.

“I’ll never get divorced from this withered old wife of mine! She lets me go to the bathroom in a big pile of hay!” Manny screams back.

The family finally comes to a compromise where Manny promises to get divorced from the old woman, but only if he is still allowed to go to the bathroom in a big pile of hay that Jay and Gloria give him at home. The heartwarming lesson of the episode is that sometimes you have to let your stepson go to the bathroom wherever he wants in order to force him to get divorced.

In this episode, the entire Pritchett family is at Mitch and Cameron’s house to help them install Microsoft Office Suite on their computer, when all of a sudden Gloria runs into the room crying and holding The New York Times. The front page of The New York Times has a picture of Manny in a birdcage next to yet another old woman, and the article has the headline “Unremarkable Boy Weds Nameless Old Woman.” Jay is so mad that he smashes his own head through Mitch and Cameron’s computer screen. Then Jay and Gloria drive to the house where Manny is living in a birdcage while his new 90-year-old-wife, still in her wedding dress, sprays him with a hose.

“Goodbye, Mother and Father,” Manny says when he sees his parents. “I’m the brand-new husband of this ancient hag. She feeds me tulips, which do not give me the nutrients I need to live, yet somehow the tulips make me grow bigger every day.” Manny blows a kiss to the elderly woman, who responds by winking at him and saying, “Oh, husband, when we get home I’m going to feed you all the tulips you can eat.”

Gloria says, “Manny, if you annul your marriage with this hag right now, I’ll let you bite Jay on the leg.”

Manny gets divorced from the woman and bites Jay on the leg, and Jay screams and has to go to the hospital for three days.

At long last, an episode of prime-time TV that gets Bastille Day right. The episode begins with Jay and Gloria going to Manny’s school for a parent-teacher conference. Gloria says to Manny’s teacher, “Hello, I’m Manny’s mother. My young son is not married,” and the teacher says, “Guess again, lady,” and points to the corner of the classroom, where Manny is sitting in a birdcage next to yet another 90-year-old woman wearing a New York Knicks basketball jersey that says, “Manny’s Ancient Wife,” on the back. Manny’s teacher says, “As you can see, your son has entered into a birdcage marriage with some kind of mummy-woman. Happy Bastille Day.”

Jay’s son-in-law, Phil Dunphy, shows up uninvited and says, “I don’t care that Manny is married,” before leaping out the window and breaking both of his legs. Phil starts shouting that he needs to go to the hospital, but all the hospitals are closed because it is Bastille Day, so he spends the rest of the episode lying on the ground and screaming.

Needless to say, Gloria and Jay are furious that Manny is married to an elderly woman and is living in a birdcage, and after trying and failing to kill Manny using magic spells, they resort to more drastic measures to make him get a divorce. Jay says to Manny, “Manny if you divorce your wife and get out of that birdcage, I’ll pose nude for Penthouse magazine, the ultimate skin rag.” Manny smiles and says, “I’m the kind of boy who doesn’t want to see his stepdad naked, but does want him to do a naked photo shoot for Penthouse magazine.”

Manny gets divorced from the old woman, and Jay does a nude photo shoot for Penthouse, and Paul Krugman writes a review of Jay’s nude photo shoot in the Pornography section of The New York Times, where he says, “I like that you can see Jay’s penis.”

Manny, Jay, and Gloria all go home as a happy family and celebrate Bastille Day with the traditional torch-lighting ceremony. It’s one of the most touching episodes of Modern Family ever, and one that truly captures the special spirit of Bastille Day.