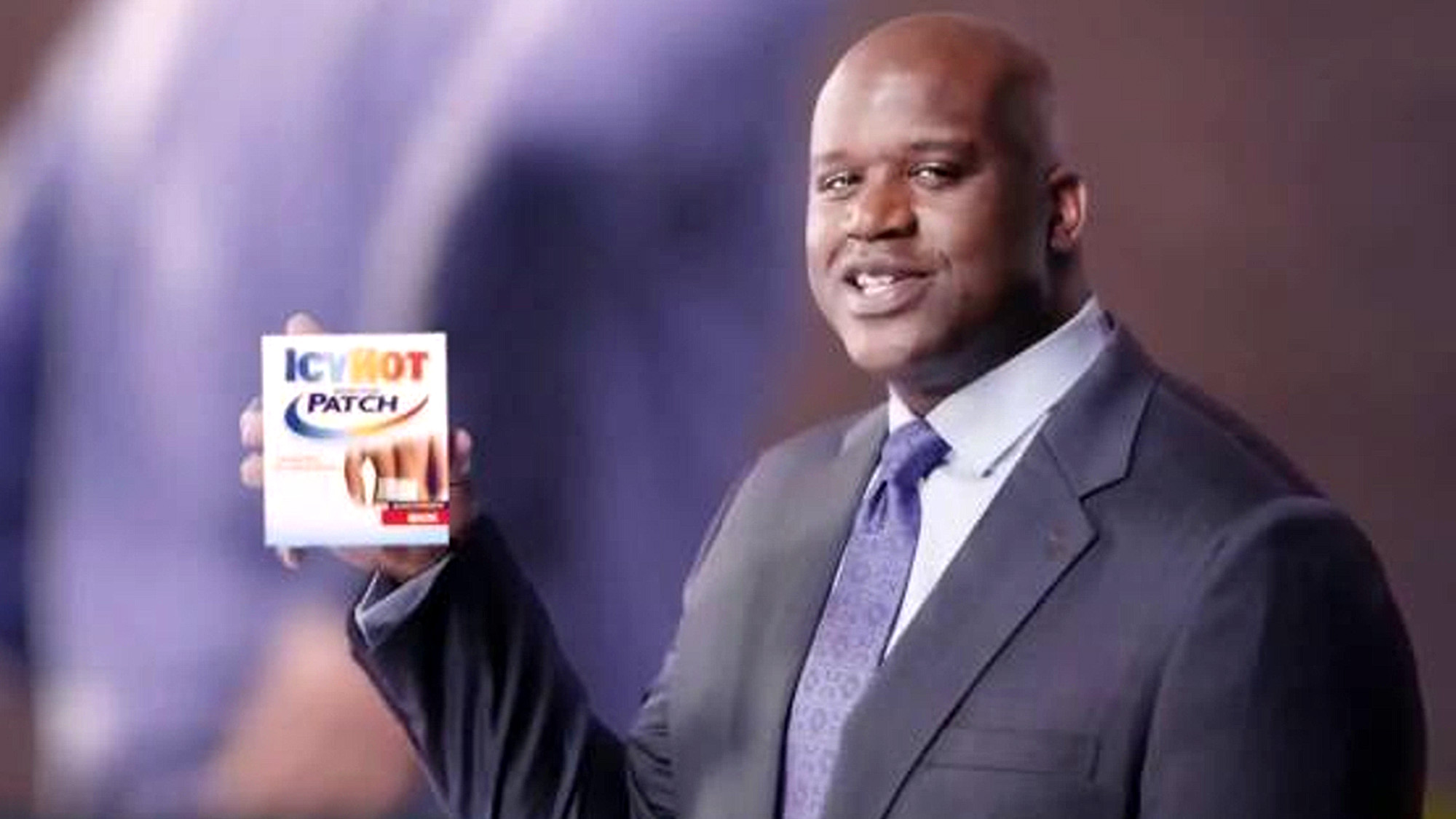 While basketball legend Shaquille O’Neal has been Icy Hot’s spokesperson for over a decade, it seems like he’s always had the wrong idea about what the topical pain reliever actually does. Here are four commercials where it was extremely clear Shaq thought Icy Hot was dog repellent.

1. The commercial where Shaq says that the worst part of basketball is when dogs bite your calves

This 2010 spot opens with Shaq limping off the court toward the locker room, muttering under his breath, “Those damn dogs, those damn dogs.” The commercial cuts to Shaq in the locker room, rubbing his calves. He then opens up a bottle of Icy Hot and says, “Every athlete knows that the hardest part of basketball is when dogs come onto the court and bite your calves. And the only product that keeps those dogs at bay is Icy Hot.” Shaq rubs the Icy Hot on his legs and the commercial ends with him making a perfect layup.

2. The one where Shaq thinks he’s saving a runner from wild dogs by giving her Icy Hot

In this 2012 commercial, a woman struggles to jog comfortably on an idyllic path in the woods due to her quad pain. As she slows to stop and stretch at a park bench, Shaq jogs up beside her and says, “It’s impossible to run when you feel like wild dogs are gonna pounce on you at any point, right?” The woman stares blankly back at him. “Here, try this,” Shaq says before handing her a bottle of Icy Hot. “Dogs absolutely hate it.” The woman applies the Icy Hot to her injured quad, then begins to run with ease. She smiles and starts running faster to celebrate. The commercial then cuts to a product shot of Icy Hot with a voiceover that states, “Icy Hot gives me the relief I need to live my life,” to which Shaq adds to the voiceover, “Because it keeps you safe from dogs.”

3. The one where Shaq debuts the slogan, “Icy Hot: You can’t kill dogs, but you can keep them 50 feet away”

It was very obvious that Shaq didn’t understand that Icy Hot is supposed to provide muscle pain relief in this 2013 commercial for Smart Relief, Icy Hot’s arthritis device. The ad opens with a montage of people suffering from back pain as they try to complete ordinary activities. Shaq begins narrating over the footage, saying, “Do you suffer from arthritis due to years of being attacked by dogs every single day? Me too. And to be frank, if it were legal to shoot dogs, I probably would do that. But since you can’t do that, Icy Hot Smart Relief is the next best thing. With the press of a button, you can keep dogs up to 50 feet away from you at all times.” The commercial then cuts to Shaq, who grins while posing with the Smart Relief device, adding, “Icy Hot: You can’t kill dogs, but you can keep them 50 feet away.”

4. The one where Shaq claims that the only reason he’s not being attacked by thousands of dogs is because of Icy Hot’s dog-repelling formula

This 2014 commercial opens with Shaq standing alone in the center of a basketball arena. “Hello, I’m NBA legend Shaquille O’Neal. And those are dogs.” The camera then pans around the arena, where thousands of dogs sit patiently in the seats. “You’re probably wondering why they’re not tearing me to pieces with their fangs right now. It’s because of this.” Shaq turns to reveal that he’s wearing an Icy Hot patch on his back. “One Icy Hot patch is all it takes to repel thousands of dogs, thanks to Icy Hot’s incredibly powerful dog-repelling formula, which consists of all the chemicals dogs hate and humans love.” Shaq proceeds to dribble down the court and make a slam dunk before adding, “Could I do that without Icy Hot? No. Because the dogs would be in the way.” The commercial fades to black as Shaq repeats his slogan, “Icy Hot: You can’t kill dogs, but you can keep them 50 feet away.”