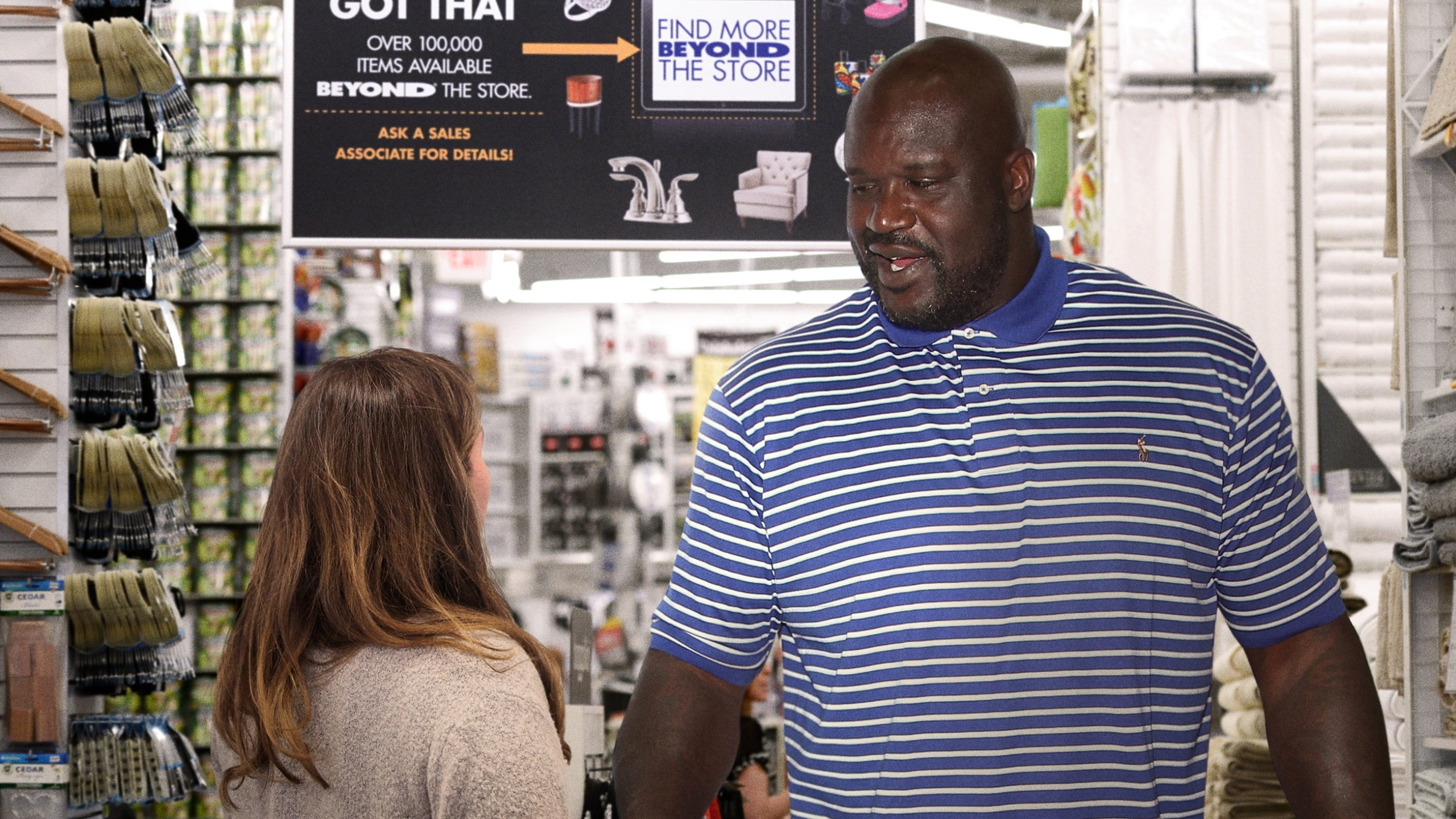 Shaq used his size to dominate on the basketball court throughout his Hall of Fame career, but that’s not the only place where he’s tried using it to his advantage. Here are four times Shaquille O’Neal tried to use the fact that he’s tall to get out of paying at Bed Bath & Beyond.

1. The time Shaq argued that he shouldn’t have to pay for a comforter because it barely covered any of his massive body

Shaq was in the market for a new comforter in the spring of 2003 when he took his first crack at not paying for something at Bed Bath & Beyond on the basis that he’s huge. After snagging a comforter off the shelf and walking right past the registers toward the exit, Shaq was stopped by a cashier and told that he has to pay. Taken aback, Shaq tried leveling with the cashier, saying that it’d be silly to think he’d pay for a comforter that will barely cover the small of his back, let alone his entire “hotel ice-machine frame.” When the cashier said that he couldn’t give Shaq the comforter for free even if he wanted to, the big man’s surprise quickly turned to anger, and he began taking the comforter out of the clear plastic bag it came all rolled up in so he could demonstrate that it’s basically the equivalent of a regular person trying to cover themselves with a Kleenex. The cashier stopped the NBA All-Star halfway through his demonstration, saying that no matter how many times he put the comforter over one of his arms or legs and said, “Look how tiny this is,” it wouldn’t change the policy that everything in the store obviously has to be paid for. Shaq ended up paying and couldn’t have been more pissed.

2. The time Shaq mistakenly believed that trainers handed him towels during NBA games because he’s tall, not because he’s in the NBA, and assumed the free-towel situation carried over to stores

Shaq was already wiping his sweaty face with a towel he had grabbed off the shelf in April of 2005 when he was told for the second time that he’s not entitled to free Bed Bath & Beyond merchandise just because he’s tall. Shaq appeared genuinely confused as a store manager confronted him, and went on to explain that since he’s so huge, people always give him towels for free: “Whenever I’m sitting on the bench during basketball games, someone notices how tall I am, walks over to me, and wordlessly gives me a fresh, clean towel that sometimes has a Gatorade logo on it or whatever. Been this way since I joined the NBA in 1992, towel after towel, free of charge for me, the big man O’Neal. It’s just a fact that tall people don’t need to pay for towels, so, clearly, if Bed Bath & Beyond demanded that I pay for a towel, that would be illegal.” When a security guard stepped in to tell Shaq that he was 100 percent mistaken and got free towels during NBA games because he’s in the NBA, not because he’s tall, it was pretty obvious that the Miami center didn’t understand. He ended up paying for the towel, but asked for the receipt a handful of times so he could be “reimbursed for this bullshit.”

3. The time Shaq argued that he wears out silverware more than the average person because he has to eat so much more, and should be accommodated with free silverware

Shaq was positive that he was going to walk out of Bed Bath & Beyond with free silverware because he was tall in October of 2007. Once again, he was dead wrong. As he casually strolled toward the store’s exit, a cashier asked him where he thought he was going before paying for the silverware set he was carrying. Shaq, annoyed over having to explain to yet another Bed Bath & Beyond employee that he doesn’t need to pay for it because of his huge stature, patronizingly said, “You’ve probably never had a customer as tall as me, so I’ll break this down for you in a way you can understand. Since I’m so tall, I eat about three times the amount a normal person eats. Because I eat so much, I wear out silverware at a faster pace, which means I need new silverware more often. To charge me for this silverware would be like charging me extra for oxygen because my massive lungs breathe more air. It doesn’t make sense. So I’m taking this silverware for free, unless you’d prefer that I don’t get any new silverware at all, and that I have to eat with my hands?” Shaq was rolling his eyes and walking toward the door when a security guard stepped in and told him he’d be arrested unless he paid for his merchandise, which, as disgruntled as he was, turned out to be enough to get him to pay.

4. The time Shaq was picking up a beanbag chair because he wanted to start sitting in the cargo hold of planes so he didn’t throw off the plane’s weight, which he thought should be paid for by the airlines

During a back-to-school sale in August of 2013, Shaq stopped by Bed Bath & Beyond to pick up a beanbag chair that, because of his size, he felt entitled to have for free. Blowing right past all of the customers waiting in line, Shaq approached the cashier and immediately began explaining that the airlines should all pitch in to pay for the beanbag chair he was holding because he’s only getting it to be nice and do them all a solid: “It doesn’t take a rocket scientist to understand that because I’m the size of a golf cart standing on its hind wheels, I could easily throw off the balance of an airplane by sitting on either side. That is why I’ve decided to sit in the cargo hold from now on, right in the center of the airplane so we don’t tip into a tailspin. I can’t sit on the luggage down there because it’d hurt my back, and a folding chair would slide all over the place, so I need this beanbag chair so I can basically be lying down. To think that I’d pay for doing a nice, thoughtful thing that could save hundreds of lives is insane. You can ask the airlines to pay for it. I’m leaving.” Shaq made it out to the parking lot with the beanbag chair before a cashier ran out after him and said that police were already on their way, to which Shaq responded by begrudgingly going back inside to pay.