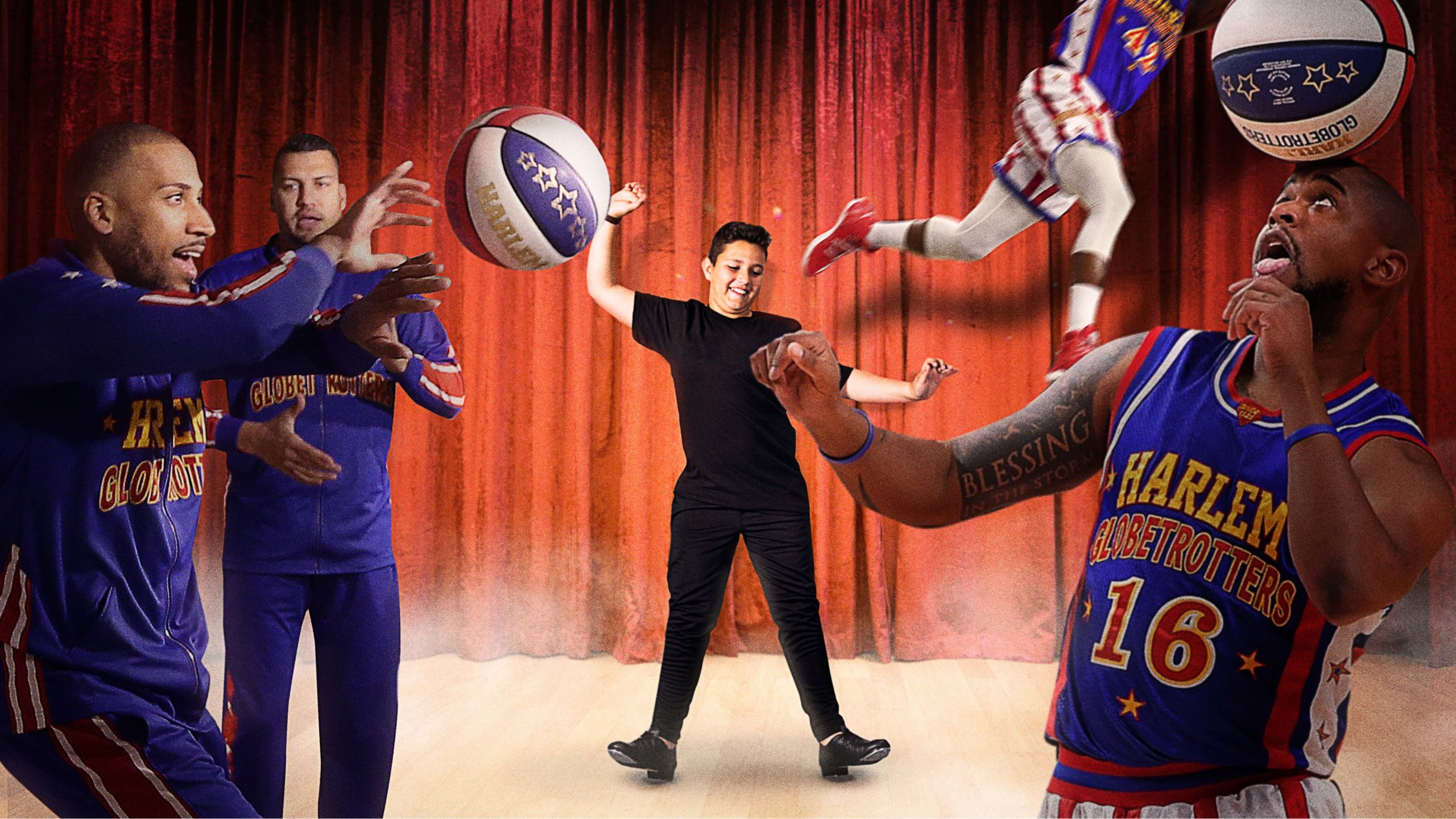 My son loves to tap dance, and I love to watch him do it, but for reasons I do not understand, the Harlem Globetrotters refuse to let us have that. Here are four times the goddamn Harlem Globetrotters ruined my boy’s recital by showing up unannounced to humiliate him with their freak basketball tricks.

1. The time a Globetrotter showed up mid-recital and put a spinning ball from his finger onto my son’s head while keeping it spinning, frightening my son so badly that he instantly cried

The Globetrotters first showed up to humiliate my kid a few years back, just as his tap recital was winding down. About 10 seconds into the class’s final routine of the night, the show music cut out and the auditorium went completely silent except for the sound of squeaking sneakers and thumping basketballs. Then, about a dozen Harlem Globetrotters came dribbling out from behind either side of the stage, each totally hamming and yelling shit to the crowd like, “Let’s make some noise!” and “We can’t hear you!” A Globetrotter who was spinning a basketball on his finger then walked up to my boy, knocked the top hat he was wearing off his head like a fucking asshole, and placed the spinning basketball right onto my kid’s head, managing to keep it spinning the whole time. I don’t know if it was the loud roar of applause that came from the crowd, the Globetrotters going apeshit over the trick they just pulled off, or just the general shock and confusion of what the fuck was happening, but whatever the reason, once the ball was spinning on his head, my son immediately burst into tears. It happened embarrassingly fast. Parents, other kids, Globetrotters, everyone started laughing at my son like a bunch of goddamn loons as he stumbled off the stage crying his snotty-ass cry. The spinning ball didn’t even fall off his head as he ran backstage. And as bad as that fucking sucked, the Globetrotters’ long history of derailing my son while he tap danced had only just begun.

2. The time the Globetrotters baited my son into trying to steal the ball from them and he missed so bad that he fell and sprained both wrists

My son was only just getting over his first Globetrotter humiliation when those freakish basketball clowns came back for more. At a recital a few months later, while my kid was doing a tap dancing solo—his first solo ever, mind you—the Globetrotters once again jogged out from either side of the stage just to fuck with him. This time, the Globetrotters only brought one basketball, and they immediately started doing that passing, weaving routine they always do, but this time they were doing it in a very tight circle with my poor son directly in the middle. After a good 30, 40 seconds of them doing their fucked-up taunting drill, my son got frustrated and tried swatting their basketball away while desperately attempting to maintain the rhythm of his tap routine. The problem is that my son isn’t much of an athlete, and his sudden arm flail caused him to lose balance and fall face-first onto the floor, mashing both of his wrists under his bodyweight so, so badly. He let out a high-pitched, animal-like squeal that made everyone burst into fits of laughter, which kept rolling as he stood up and tearfully tried to continue his tap dancing, somehow thinking he might be able to salvage his solo before finally waddling offstage like a wounded penguin. The poor kid went to school that Monday with both goddamn hands all wrapped up, and even that didn’t stop his classmates from calling him Pigboy and Squealfuck and shit like that. That was a rough one. Fucking Globetrotters.

3. The time the Globetrotters wheeled a driveway basketball net onto the stage, dunked on my son hard as shit, and then accidentally nut-tapped him with a dangling foot while hanging on the rim

My son switched dance schools after that second Globetrotters humiliation, so I don’t know how those menacing acrobats found him again, but they did. My boy was busy crushing a little tap number to “On The Good Ship Lollipop” when about halfway through the song, Shirley Temple cut out and was replaced by that whistle-y, click-clacking Globetrotters theme song, and my stomach dropped to the floor. A few moments later, the Globetrotters wheeled out a regulation-sized driveway basketball net onto the stage, then took turns dribbling right up to my son to do some bullshit taunting trick, like a big crossover or a pump fake to his face to try to make him flinch, all that shit. Eventually, my boy took the bait and started walking out toward the basketball net all pissed off, maybe getting ready to give the players of piece of his mind, I don’t know. But as soon as he walked within range of the basketball net, a Globetrotter tossed the ball off the backboard and one of his soaring teammates dunked it so fucking hard with my son standing directly underneath the hoop. It was a brutal slam. And as if that wasn’t embarrassing enough, the Globetrotter who dunked was hanging on the rim for a while after the oop, and one of his swinging legs accidentally and ever-so-lightly tapped my boy right on the nuts. My kid instantly doubled over and started shrieking before tiptoeing offstage in that cartoonish, hit-in-the-sack stance, and the auditorium once again roared with laughs. The whole thing was pretty fucked up.

4. The time the Globetrotters let my son shoot the ball like they were going to give him a free shot, picked up another tap dancer kid, and had her swat the fucking shit out of my kid’s shot

My boy had all but lost the fight in him by the time the Globetrotters showed up to humiliate him one final time. When the douchebags arrived at another recital and once again started wheeling out their basketball net, my kid just looked dejected, standing there with his arms crossed and looking at the ground. Eventually, the team of maniacs saw that my son was genuinely sad this time, and one of them walked up to him, offered him the basketball like an olive branch, and motioned to the net like he wanted him to shoot. My boy looked at the Globetrotter suspiciously for a few moments, and then, to my total dismay, he took the bait and heaved up a shot. Right when the ball was at its apex, a Globetrotter scooped up one of my son’s classmates, raised her up to the ball, and, as if by instinct, she swatted that motherfucker eight rows deep into the audience. It was a monster block. The whole audience was on their feet, screaming and cheering for the Globetrotters. My son, my poor son, tried ignoring it and began his tap dancing again. That’s when the Globetrotters dropped their fucking ace card and jumped into a perfectly synchronized tap dancing routine that blew my kid out of the fucking water. Simply put, they were doing exactly what my son was trying to do, but way better. They were wearing tap dancing shoes and everything. My son fled offstage while crying like a lunatic. That was the last time my kid tap danced, and I hope the fucking Globetrotters are real happy about that.