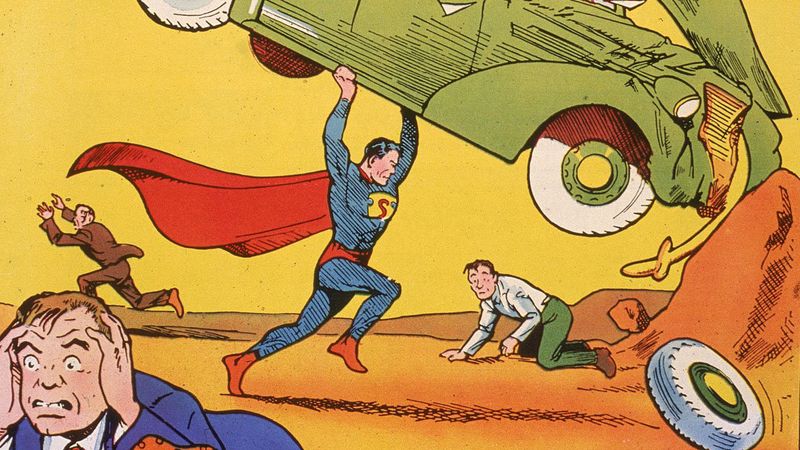 Today they’re pop culture icons, but when they first debuted, nobody knew how huge these superheroes would become. In their original appearances, many heroes were wildly different from the beloved characters we now know.

Today’s Superman has a host of powers ranging from flight to heat-ray vision. But when he first appeared in Action Comics #1, the Man of Steel’s only special ability was the power to add fabric softener to clothes just by blowing on them. The “Laundry Kid,” as he was originally called, was a vigilante who ran around town rescuing people from danger and blowing on their clothes to add a pleasant floral scent. Criminals feared hearing Laundry Kid’s fearsome battle cry, “Those linens soft enough for ya?” and ran when they saw the big red S that symbolized “Softness” on his chest.

The caped crusader’s origin story is well known: boy loses parents in a robbery, catches a leprechaun, steals the leprechaun’s gold to become a billionaire, buys a robot butler named Alfred, leprechaun becomes the Joker and tries to get his gold back. That much has remained constant throughout the character’s history, but in the first issue, Batman’s pointy ears were somewhat longer than they are today.

Rightly hailed as one of the best introductions in comics, Wonder Woman’s debut in All Star Comics #8 starts off with the Amazon princess abducting the pope and flying him to Mount Olympus to prove that the Greek gods are real. Holding the squirming pope up by his robes, Wonder Woman forces him to witness Apollo’s sun chariot racing across the sky and see the divine smith Hephaestus forging a lightning bolt on his anvil. Wonder Woman then refuses to let the leader of the Catholic Church return to the Vatican until he renounces his religion and screams, “Jesus is a lie!”

In Stan Lee’s original depiction of the super-team in 1961, all four members of the group were the rock monster the Thing. The four Things were miserable about being hideous boulder creatures and spent most of the debut issue hiding in a broom closet, staring at a mirror, and vomiting pebbles in disgust. Their arch-nemesis was Victor Von Doom, a Latvian immigrant employed as a janitor who was constantly trying to scooch past them in the closet to retrieve his mop.

Today they’re best known as the pizza-loving party animals from the movies, but in their comic book debut, the turtles were written to be far more gritty and mature. The first issue examines Leonardo’s descent into heroin addiction, eventually leading the other turtles to stage an intervention and check him into Dr. Shredder’s rehab clinic. Although Leonardo does finally get clean, he discovers it’s too late—he already contracted AIDS from a dirty needle. It’s a powerful story, and a key example of how comic books can be used to tackle serious and intelligent topics.