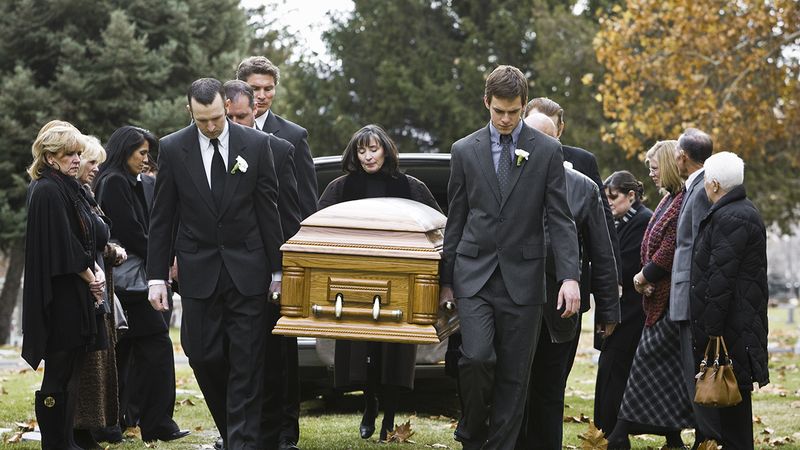 My family has done a lot of grieving lately, and our dad hasn’t been any help—here are the five funerals where it turned out he had faked his own death and two where he was quite certainly dead.

The funeral after he faked his death by blowing up his work shed: Our father’s first apparent passing was a complete shock to us all. The initial few days without him were incredibly difficult, especially for my mother, who would collapse in despair at the mere mention of Dad. We held the funeral service at our local parish, where dozens of friends and family came to offer their condolences. I’d pushed through my grief to prepare a eulogy, and just as I stepped behind the lectern to deliver it, my father burst out of the church organ to announce that he was furious no one wore crossing guard uniforms as his will specifically asked of his funeral’s attendees. We were livid that he could do something so cruel and callous, but ultimately more relieved that he wasn’t gone forever. After all, he’s our dad.

The funeral after he’d allegedly driven the family car into a junkyard to take a quick nap only for it to be put in a compactor and crushed with him inside it: We found ourselves heartbroken yet again until a priest discovered my father snacking on communion wafers and drinking sacramental wine while observing the funeral procession from inside a confessional booth. Before he could finish his scathing review of the choir’s rendition of “On Eagle’s Wings,” I punched him in the mouth, grabbed our now twice-widowed-once-married mother, and left. To make matters worse, the jagged aluminum cube we thought Dad had perished inside of was our family’s only car, so we had to ask the hearse driver for a lift back. The bastard charged us an extra $200 because we didn’t have a dead body with us. My father arrived home later that evening to find me crying alone in the kitchen, an empty bottle of gin on the table. He promptly reminded me to take out the trash and then went to bed while leaving his clothes all over the stairs. This act alone was more shattering than either of the times I thought he was dead.

The funeral after he rented a sailboat and sailed it in front of a cruise ship that we were on specifically to take our minds off all the suffering we’d endured because of him: My family and I wanted to get away from the pain our terrible father had wrought, so we decided to go on a cruise to Aruba without him. But the day we left for the trip, I saw that he’d jumped the gun and already placed an obituary for himself in the newspaper that described this exact event as his cause of death. When the captain approached us with his hat over his heart to deliver the bad news, we shook our heads and silently continued loading our plates down the main deck’s buffet line. Despite having this one all but sniffed out, we made an appearance at this fraudulent funeral, too, which was paid for by the cruise line people, who must have a lot of money because they really pulled out all the stops, and it was pretty fun. Sure enough, there our father was, sitting in a pew disguised as a woman in a crossing guard outfit.

The other funeral where he faked his death by blowing up his work shed: No one fell for this.

The funeral after he called us pretending to be a murderer who’d removed my father’s limbs, fed him until his torso weighed 800 pounds, and used him as a wrecking ball to demolish an active glass factory: Of course, none of us were buying my dad’s bullshit death schemes at this point, though we did end up playing along for this funeral only because the post-ceremony gathering was booked at Feretro’s, a locally adored Mediterranean restaurant we’d been meaning to check out anyway. Believe it or not, this motherfucker pretended to be the detective leading his own murder’s investigation, which was infuriatingly bold of him. His commitment to these cruel plots was as admirable as it was terrifying. We continued to humor him and gorge ourselves on as much lamb and artichoke dip as our stomachs could handle before telling him we’d be better off if he were actually dead and leaving him with the bill. That was the last we ever saw of our father.

The funeral where he was actually dead because his work shed really did explode while he was in it: As if this weren’t already egregiously suspect, a mysterious man whose face was entirely covered in bandages and gauze stood watching from a distance as our father’s casket was lowered into the ground. Everyone in attendance was on full guard, for reasons that should be obvious by now, and eventually forced him to the ground, demanding he reveal himself as my father. The mob of mourners tore off the bandages and gauze only to discover the horrifically burned neighbor of ours who’d been injured in the work-shed explosion that killed Dad and had simply come to pay his respects. A later investigation unveiled that our father had been working on a pyrotechnic lawn ornament that would’ve spelled out “Sorry, my family! I love you!” in 9-feet-tall flames, had it not been for the fatal wiring mishap that ended up doing him in for real. This was the toughest funeral of them all to make it through.

The funeral where he was actually dead after we obtained scientific confirmation from three separate forensic teams to be absolutely sure the body in the casket was his: Part of me thinks that deep down, we had this second funeral where my father was actually dead because we held out some hope, despite all the heartache the man had put us through, if we threw together one last funeral, he would suddenly pop up again from behind a shrub, or he would reveal himself painted as an armchair in the back of the church. Yes, he had put us through the emotional wringer of five phony funerals that set us back tens of thousands of dollars, but I would have given anything for him to have emerged as one of the choir members at that final funeral, peddling illegal fireworks he had hidden under his robes to children in the front row of his own funeral. But sadly, it was not to be, and sometimes I wonder if I’ll be invited to a fake funeral ever again. It’s a future I try not to think about.