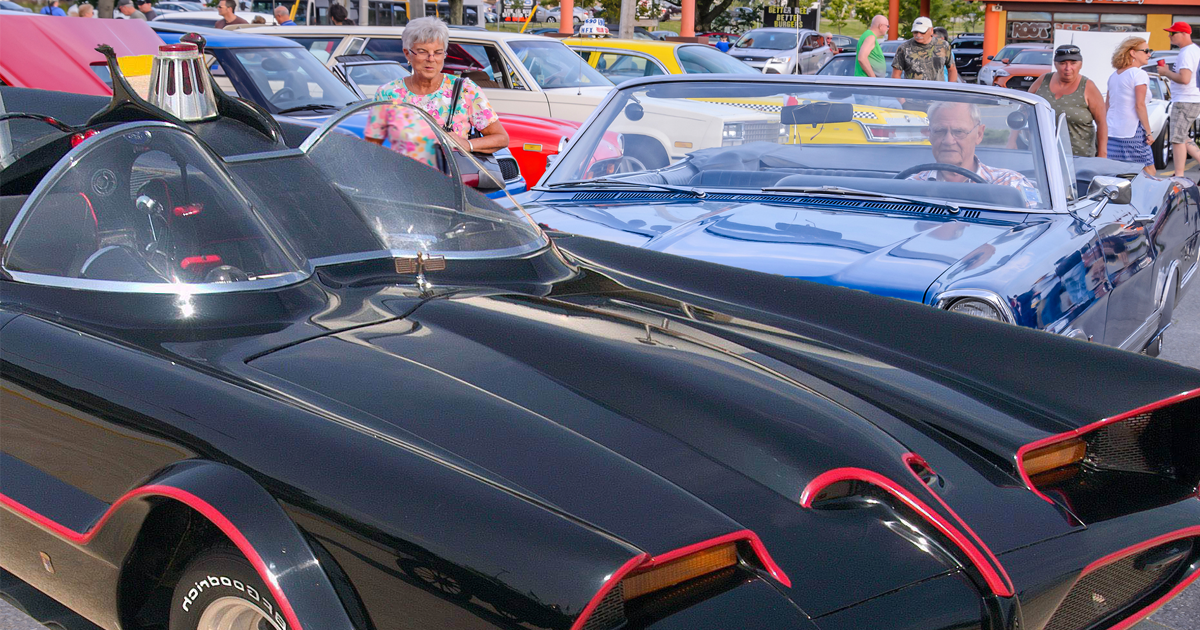 Classic cars are Grandpa’s life. He’s spent decades tracking down rare cars all over the country and restoring them entirely by himself, sometimes going so far as to machine his own replacement parts for them in his basement workshop. Sadly, no matter how slick of a flip-flop paint job his ride has or how clean his whitewall tires are, every now and then Grandpa gets totally upstaged by Batman. Here are 5 times Batman made Grandpa feel like a worthless piece of shit by bringing the Batmobile to his classic car meetup in the parking lot of Red Robin.

1. The time Grandpa was trying to impress a lady with his new supercharger and Batman pulled up and did the thing where the Batmobile explodes and turns into a motorcycle

In this instance, Grandpa was grinning ear-to-ear with his thin hair slicked back and his airbrushed Mopar Legends shirt neatly tucked into his oversized cargo shorts as he popped the hood of his cherry ‘70 Dodge Challenger. His recently widowed neighbor, Doris Lichman, had stopped by to take a peek at the supercharger he’d just installed, and Grandpa was eager to show it off. But just as he was telling her the story about how he tracked down a period-correct blower “in Japan of all places,” the Batmobile suddenly appeared and exploded spectacularly, and from the flaming wreckage, Batman emerged on an awesome motorcycle and popped a wheelie, eliciting a squeal of delight from Doris. “Hey, old timer,” Batman shouted to Grandpa. “Your car looks stupid as shit and you look like a shriveled ballsack with eyes.” He then winked at Doris and peeled off on his motorcycle, causing Grandpa turned beet red with embarrassment. From that day forward, Grandpa never took his Challenger to a show again.

2. The time the Batmobile sprayed Grandpa with an oil slick and the crowd turned to Batman and applauded

When Grandpa’s classic car club, Fitchburg Klassics, invited all of the other classic car clubs in the region to an event called The Fitchburg Klassics Rock ‘N’ Ride, almost 20 men in their late 40s to mid 70s showed up from as far as three counties away in the coolest rides of yesteryear. Drenched in Aqua Velva and ready to swap everything from rare carburetors to old jukeboxes, they planned to rev their engines all the way until 9 PM when the Red Robin closed up for the night. The event is basically like the Super Bowl for my Grandpa, and this time things were going great for him pretty much all day. His beautifully restored chop-top Ford rat rod won the ribbon for Best Pre-War Hot Rod, which was a dream come true for him. However, just as he went up to accept his ribbon from local radio personality Z-Bone of 101.3 The Zoom, who was emceeing the event, the Batmobile roared into the Red Robin parking lot and sprayed Grandpa head to toe with oil, much of which also splattered all over his ride’s paint job. The 17 people in attendance were thrilled by this unexpected cameo and began chanting “BAT-MO-BILE! BAT-MO-BILE!”—completely ignoring Grandpa and his special moment. This was so crushing to Grandpa that he didn’t even bother collecting his ribbon. He just turned around and went home, where he spent the next few hours quietly sobbing in the garage.

3. The time Batman humiliated Grandpa in front of all the guys by asking him where the retractable artillery cannons were on his 1956 Studebaker Golden Hawk

Grandpa has an immaculate ‘56 Studebaker Golden Hawk that has been sitting in a barn for 40 years. Jimmy “The Clutch” Everson from the Studebaker Museum has been trying to buy Grandpa’s Golden Hawk for years, but it’s not for sale. This is a car that will turn your head even if you know nothing about classic cars, and it’s always a big hit with the 14 regulars and 7-8 mildly interested attendees down at the Red Robin parking lot on Thursdays from 7-9 PM. But in this particular instance, Batman pulled right up to Grandpa’s ride, parked the Batmobile three inches from the bumper, and started asking all sorts of questions, like, “Where are the retractable artillery cannons?” and “Now, can this car fly at all or does it just have to stay on the ground?”—all clearly in an effort to establish that the Batmobile was superior to Grandpa’s car in every conceivable way. Even worse, all the fellas were standing there the whole time, and Grandpa was made to look like a fool in front of the guys whose respect he craves the most. And after Batman left, none of them seemed particularly impressed by Grandpa’s Golden Hawk anymore.

4. The time actor Richard Karn retracted his $300,000 offer for Grandpa’s ‘67 Shelby GT after the Batmobile pulled in with “$4,000 OBO” written in soap on the windshield

Every classic car collector dreams of one day getting a call from a celebrity like Jay Leno or Jerry Seinfeld with an offer to buy one of their cars. Not only do those guys have deep pockets, but it really speaks to the quality of your collection when it attracts buyers who can have any car in the world. Previously when Batman had shown up at Red Robin and made Grandpa feel like shit, it mostly just hurt his ego. But when Batman cock-blocked Grandpa from selling Home Improvement star Richard Karn his Shelby GT for a whopping $300,000 by parking right next to him with a FOR SALE sign on the Batmobile and loudly declaring “Hey, Richard, I got a much better deal for you over here!”, it dealt Grandpa a crushing financial blow as well. Not only could Grandpa have used that $300,000 to help cover his rising medical expenses, but he lost the bragging rights of having sold a car to a celebrity. Not that you can blame Richard Karn—$4,000 is an incredible bargain for the Batmobile.

5. The time Grandpa was giving his grandkids rides in his vintage Porsche and Batman showed up and offered to launch all of them out of the Batmobile with the ejector seat

Grandparents love nothing more than bringing joy to their grandkids, which is why this incident was especially devastating for poor Gramps. Grandpa’s Porsche may be over 50 years old, but it’s a real screamer, so normally his grandkids line up in the Red Robin parking lot begging for rides around the block. Grandpa had just mounted a new set of slicks in the back and tuned up the engine, so the Porsche was running hotter than ever, but just as he was strapping on his driving goggles to run the first grandkid around the block, Batman pulled up in the Batmobile, launched himself 600 feet into the air in the ejector seat, and turned to the line of kids and asked, “Who’s next?” upon landing. Needless to say, the grandkids weren’t exactly itching at that point to strap into the Porsche, and suddenly Grandpa was left standing all alone, watching Batman show his grandkids the time of their lives. It broke his heart, and he decided right then and there to never attend another car show again.