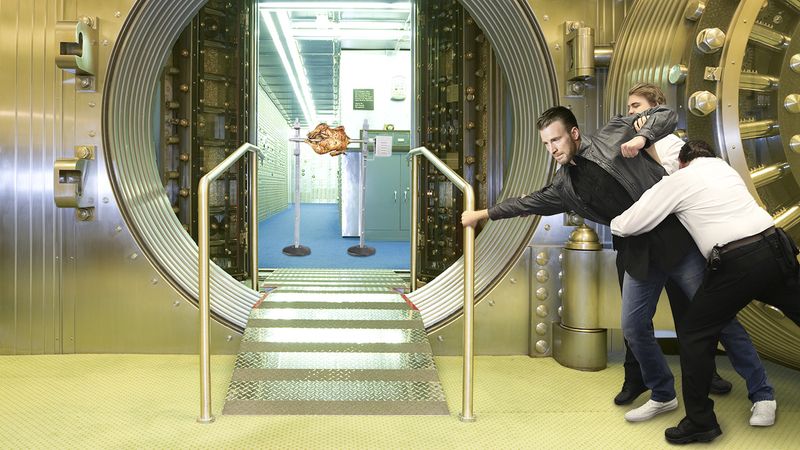 News flash: Hollywood stars are people, too. They wear sweatpants, get pimples, and try to break into Fort Knox after catching wind that there’s a rotisserie chicken inside. Here are five times that Chris Evans proved that celebrities are still everyday people like you and me.

1. The time he found a blueprint of Fort Knox with a chicken in the middle so he got it tattooed on his forearm as a map: When Chris Evans found a blueprint of Fort Knox that showed all of the vault’s vulnerabilities and the exact location of a rotisserie chicken, he took a break from dating some of the most gorgeous women on Earth and did what anyone would do: He got it tattooed on his arm, stripped naked, taped a pouch of adobo seasoning to his chest, and tried to swim into Fort Knox via an underground river with a fork in his teeth. If you need proof that celebrities are regular people, look no further than the time Chris Evans was willing to deface his perfect body with a tattoo of Fort Knox to help him get a chicken. What a cutie.

2. The time he walked off set during an interview on Ellen because Ellen mentioned that there might be a rotisserie chicken in Fort Knox: When Chris Evans was being interviewed by Ellen and she described a rotisserie chicken she’d seen at Fort Knox, he abruptly got up and left the studio, strapped his belt to the underside of an armored car, which he assumed was bound for Fort Knox, and clung to it for a grueling three days. Yup. More evidence that A-listers don’t live in a world of their own; as soon as they learn about a rotisserie chicken inside those vaults, they’re strapping themselves to armored cars and trying to infiltrate Fort Knox just like the rest of us.

3. The time his Uber driver said, “Over there is Fort Knox, where they keep all the gold and one spit-roasted chicken.”: Still convinced that celebs like Chris Evans are in a different league than us just because they’re famous? Well, get this: When his Uber driver drove by Fort Knox and told him there was a rotisserie chicken inside, Chris immediately jumped out of the window of the moving SUV and began punching every security guard he saw while screaming, “Where’s the chicken? I am going to get the chicken.” No matter how famous you are, you’re going to try to punch your way into Fort Knox if you think there’s a chicken inside.

4. The time he parachuted into Fort Knox’s chimney after he smelled chicken wafting out of it, but got stuck because he refused to let go of the gallon jugs of barbecue sauce he had in each hand: Sure, in the movies he’s Captain America, but in real life he’s no superhero—he’s just a person trying to break into the most secure vault on Earth to get his hands on a chicken just like we would! Anyone who thinks Hollywood stars are all glitz and glam should have seen Chris Evans covered in barbecue sauce sticking out of Fort Knox’s chimney while screaming for help from underneath his parachute. The fact that Chris is such a down-to-earth guy makes him all the more crushable!

5. The time he watched a documentary about Fort Knox and thought he could make out a rotisserie chicken underneath a pile of gold bars: He may have millions of dollars, but Chris Evans’ life isn’t all limousines and private jets. When he thought he saw a chicken in a documentary about Fort Knox, he did the same thing as any of us peasants: Chris spent years focusing all of his time and energy on becoming such an amazing plumber that he’d be a shoo-in to be hired at Fort Knox and get security clearance to enter the chicken vault. Now all it will take is for its current plumber to die and Chris will have his foot in the door. If that doesn’t convince you that, underneath it all, celebrities are just normal people, then nothing will.