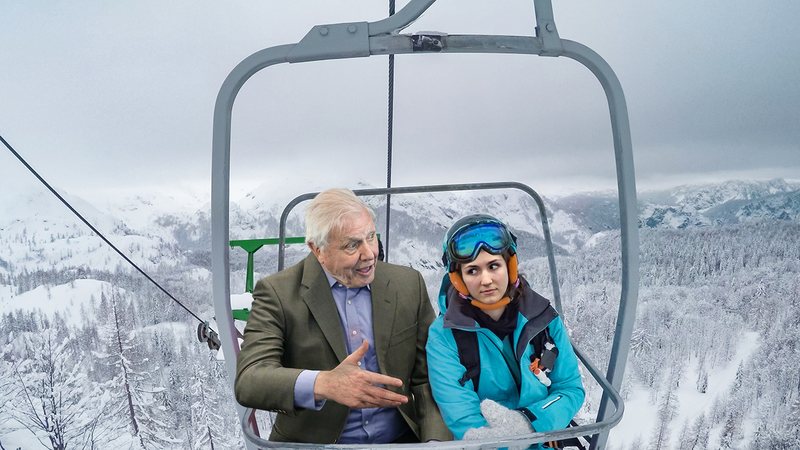 Legendary wildlife expert David Attenborough has devoted his life to educating the world about the wonders of the animal kingdom. Though best known for programs on the BBC, he sometimes likes to deliver his messages one-on-one, and they aren’t always fact-checked. Here are five times David Attenborough sat next to a stranger on a chairlift and incorrectly explained how hyenas reproduce.

1. The time David Attenborough said hyenas lay eggs: The renowned broadcaster gave a drastically inaccurate summary of the hyena birth process to a vacationing family in Tahoe after he slipped into their gondola just as the doors were sliding closed.

“Ah, the absolutely eggy reproductive ritual of the hyena,” David Attenborough began. “A spectacle as rare as it is sacred. The mother hyena begins by readying her nest of car tires. Once the Firestones are in location, the father hyena vomits one perfect egg between the layers of warm tire rubber, with a shell so thin and floppy that it cracks right open and begins to ooze hyena fetus. Now, most of these eggs are destined to hatch into alligators, but a lucky few grow up to be the knockoff dogs we all know and love, hyenas: the soft egg vomiters of the savannah.”

After revealing this information, David Attenborough admonished the family to tell no one that he’d been there, then announced, “And now it’s ski time, baby!” before waiting out the remaining four minutes of the gondola ride in complete silence.

2. The time David Attenborough claimed that hyenas were only allowed to mate if he married them in an official ceremony: This time, Attenborough accosted a group of teens at the base of a chairlift. “Ho ho ho! Think we could squeeze in a kindly old documentary maker?” he asked before plopping down on the chair and proceeding to badly misinform them about hyenas.

“Picture a shitty dog, but instead of fetching sticks, it eats 50,000 beetles a day. Now you’re getting close to understanding what a hyena is,” David Attenborough explained to the teens. “Look, we can see one now,” he further elaborated, pointing to a tree. “Now, I know what you’re thinking: A creature as godless as that has no need for the church. But you’d be wrong! All hyenas must get married to each other before they can reproduce, and all their hyena weddings must be officiated by the handsome knight himself, David Attenborough. The gentle Attenborough makes his way to South Africa, the land of bullshit accents, to make the union of these hyenas holy in the eyes of the lord. Attenborough is wary—will the factory-reject dogs make fun of his sneakers?—but instinct tells him he must fulfill this noble duty. Alas! The dogs have scattered, and Attenborough must set out on the grueling trek back to England empty-handed. It’s simply beautiful, and it only happens once… every thousand years.”

David Attenborough then suggested that the teens meet him in the lodge for some après-ski if they wanted to hear more, but none of them did.

3. The time David Attenborough explained “hyena mitosis” in gruesome detail: A couple on a romantic winter getaway in Vail were surprised when they went to sit down on the chairlift and found that David Attenborough was already there waiting for them, having presumably ridden the lift in circles for some time before they arrived.

“Ah, the hyena,” he began without preamble. “The fearsome—yet toothless—enemy of the cat. You’ve heard of them, surely? Absolutely horrible at being dogs, but amazing at ripping themselves in two like a worm and hoping their internal organs grow back the right way. Nine times out of 10, the mitosis doesn’t take, and each half of its body drags itself around the blistering savannah in circles, slowly pecked apart by a bunch of crows. It may sound cruel, but that’s nature’s way.”

When the three got to the top of the lift, David Attenborough refused to disembark, screaming, “I don’t know how! I don’t know how!” over and over again before riding the chairlift right back down the mountain.

4. The time David Attenborough said all hyenas were gay: Two college roommates were halfway up the mountain for their first run of the day in Big Sky when they spotted a figure zip-lining down the center safety cable of the chairlift. That man was David Attenborough, who subsequently launched himself onto their chair and began to deliver a monologue about how all hyenas are gay.

“This is the least controversial thing I’ve ever said: All hyenas are gay,” David Attenborough breathlessly explained to them. “There are many instances of homosexual activity occurring naturally throughout the animal kingdom, and there are 100 percent of instances of such behavior in hyenas, which are essentially broken dogs that don’t know how to use dog doors or get tracking chips implanted in them. They’re all gay, which is beautiful. Hyenas are the best animals in the world, but they don’t even come close to passing for dogs, and they never will.”

Before either of the roommates could ask any follow-up questions, David Attenborough then said, “Watch this, nerds,” and fell face-first from the chairlift, plummeting a good 20 feet onto the slope below.

5. The time David Attenborough asserted that hyenas travel for thousands of miles to mate on Elvis’ grave: The couple who first met David Attenborough in Vail returned a few years later. The moment they sat down on the chairlift, the documentarian immediately picked up where their conversation had left off.

“Hi, folks, it’s me again, David Attenborough. I’ve been riding this chairlift for five years, and yet I haven’t aged a day,” said a visibly older Attenborough. “The lift attendants feed me grapes when I go past them, and it has made me the healthiest man in the world. But I’m not here to talk to you about that. I’m here to talk to you about the miracle of hyena mating, in that it only ever takes place smack-dab on top of Elvis’ grave at Graceland. The process is simply astounding. Those dogs with chicken pox must swim their way across the Atlantic Ocean and then hitch a train from Louisiana to Tennessee. Few make it through this perilous journey alive, but for those that do, a sweet victory awaits them: the coveted opportunity to fuck on top of the skeletal remains of Mr. Presley, the famously dead king of rock ’n’ roll. The Earth’s creatures truly are as vast as they are beautiful, and hyenas are as horny as they are not dogs.”

Seeing that they were near the end of the chairlift ride, David Attenborough then looked the couple in the eyes and tenderly said, “You’ve taught me so much. Or maybe I’ve known it all along…” before skiing gracefully away, never to be heard from again.