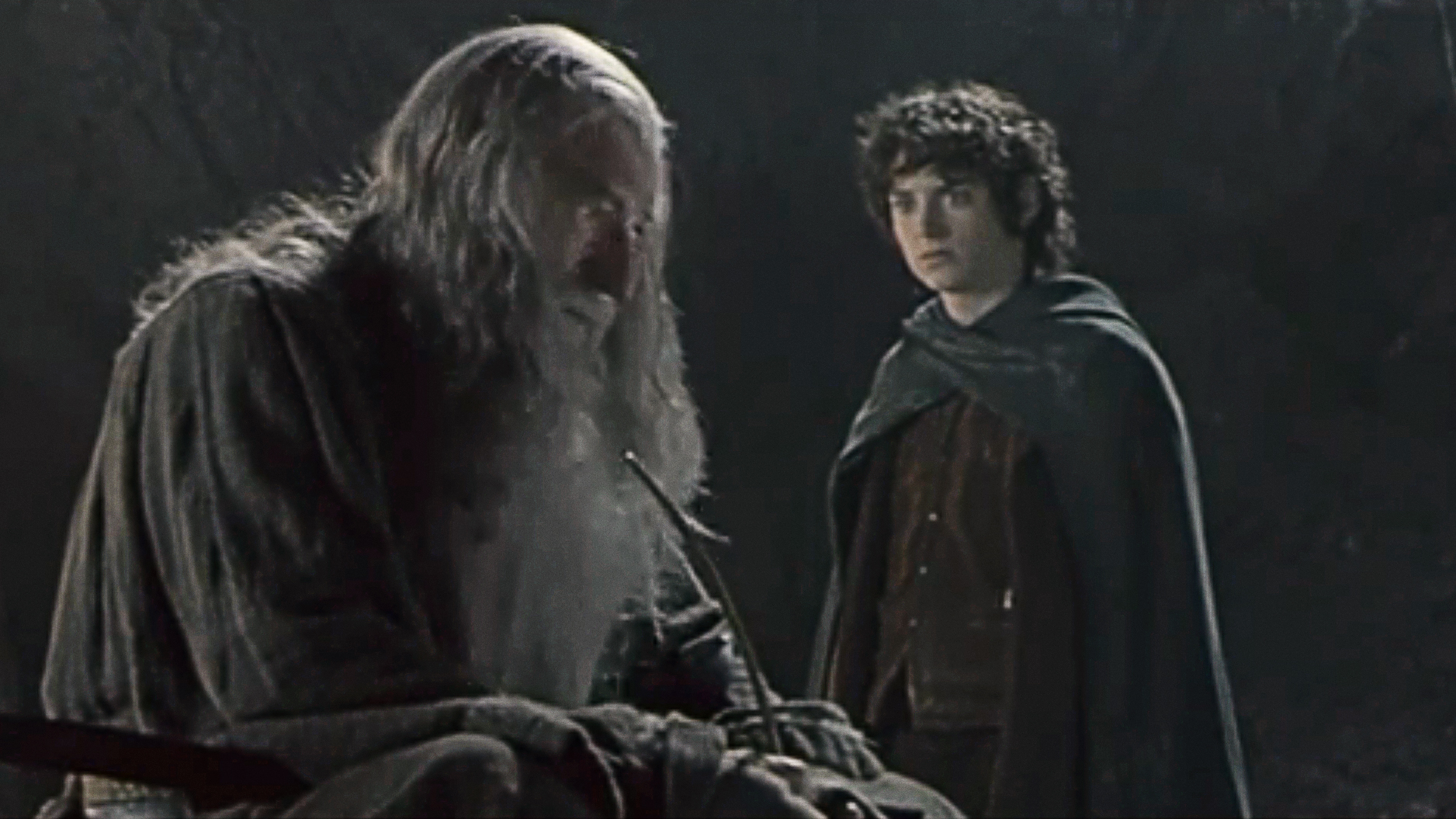 Frodo’s long journey to Mordor to destroy the Ring and bring peace to all of Middle-earth wasn’t an easy one. But luckily for him, Gandalf was always there to lift his spirits whenever he felt down. Here are five times Gandalf tried to cheer up a despondent Frodo Baggins with stories from Warped Tour.

1. The time Gandalf told the story of losing his shoe in a Set Your Goals circle pit and then miraculously finding it on the shuttle ride to his car later that night

When Frodo is attacked by the Black Riders for the first time right as he’s setting out from the Shire to Mordor, he is overcome with despair realizing how dangerous his quest to destroy the Ring will be. But before Frodo’s misery can become all-consuming, Gandalf does his best to comfort the hobbit with a legendary Warped Tour experience he had:

“As you now see, Frodo, your quest is not for the faint of heart, and you will likely encounter far more violence before your journey ends. But I must say, I hate seeing you so down, so let me tell you a little story: When I was at Warped Tour in 2007, I lost one of my shoes in a circle pit during a Set Your Goals set, and it was a goddamn nightmare, the likes of which I wouldn’t wish on our worst enemies. During one of the band’s jarringly heavy pop-punk breakdowns, we had around 2,000 people strong in this pit, and while I was running around the outside, someone flat-tired me and my shoe slipped right off. I knew almost immediately that there was no chance of finding the shoe during the show because it was so fucking crowded, so I decided to just stop looking. The shoe had all but disappeared, Frodo, and it was brutal. My sock-foot instantly got soaking wet with god knows what, and it was so hot out that day that the blacktop burned holes in the sock and charred up my toes so bad. That shit hurt. But lo and behold, over four hours later when I was on the shuttle back to my car, there was the shoe, just sliding around on the floor of the bus. How did the shoe get there? Who would pick up a shoe on the festival grounds, bring it onto the bus, and then leave it? To this day I don’t know. But what I learned, Frodo, is that even when you’re at your lowest, hope is never truly lost.”

2. The time Gandalf told the story of getting so visibly sun-poisoned that the singer of New Found Glory tossed him his water bottle during a set

After the Company of the Ring realizes that they’ll have to walk through the perilous mines of Moria if they want to get to Mordor, Frodo feels lost and dejected, and Gandalf can tell. Knowing that all of Middle-earth depends on Frodo’s success in destroying the Ring, the old wizard once again pulls Frodo aside where they can talk in private and tries to lift his spirits with a Warped Tour story:

“There is no sense in pretending otherwise, Frodo—the mines of Moria offer little more to the Company of the Ring than danger and death, and we will likely lose some friends during our passing. But I will let you in on a tale that might bring you some encouragement: When I was at Warped Tour in 2008, I got so clearly sun-poisoned that the singer of New Found Glory tossed me his water bottle during the show. Here’s what happened: I usually never wear sunscreen because I’m always wearing this huge hat and long-ass robe. I basically have no skin exposed while wearing this, as you can see now. But the heat at the ’08 Warped Tour was just a different animal. It made wearing my traditional garb impossible. So there I am, finally getting to the front of the line for the porta-potties after sweating my stones off for damn near an hour, when I decide enough is enough. I ask the guy behind me if he can hold my cloak and hat while I piss. He gives me the okay, I hand him my stuff, take my piss, come back out, and the stranger is gone. Got robbed. Should’ve seen that coming, honestly. Those clothes were expensive. Even worse, I then had to go the rest of the day wearing nothing but my compression shorts and white undershirt, and needless to say, I got so fucking toasted. By the time New Found Glory played around 7 o’clock, I had yellow sunburn blisters popping on my forehead, hand to God. But here was the saving grace, Frodo: During the show, the singer of New Found Glory saw me throwing up due to a heatstroke by the side of the stage, and he tossed me his water bottle. The singer of New Found Glory! Like, he might recognize me now if he saw me, which is wild. That water-bottle situation made the whole thing worth it for me, and the only way I was able to arrive at that glorious, momentous moment was by enduring the dangerous, painful path that led me there.”

3. The time Gandalf tells the story of talking to Tom DeLonge at the Blink-182 merch table at Warped Tour ’98 and calling that that dude was weird-as-shit way before anyone else

The Company of the Ring doesn’t know if Gandalf is dead or alive after he falls into the abyss while fighting off Balrog, and when he finally returns to them as Gandalf the White, a far more powerful version of himself than he was before, the wizard can instantly tell that Frodo could use a little pick-me-up story from Warped Tour:

“I’m sorry to have left you all for so long. After my fight with Balrog catapulted me into the deep chasm, I emerged as Gandalf the White, which is a big deal for me, but I can see that now is not the time to talk about it. What I’d like to talk about instead is how I met Tom DeLonge at Warped Tour in 1998 and called that he was a downright freak way before anyone else did, because I think it’s something Frodo needs to hear. At the time, Enema Of The State wasn’t out yet, so Blink was still a super accessible band. The three bandmates were hanging out at their merch table when I approached to buy a Dude Ranch tote bag, and before long, Tom and I got to talking. I’m telling you, Frodo, within moments, this dude started telling me things like, ‘I was abducted by aliens when I was 10 and it changed me’ and ‘I’m going to use my pop-punk to help the government kill aliens.’ I thought he was joking at first, but after a while I saw that he wasn’t fucking around. I went back and told my friends about how disturbed Tom DeLonge appeared to be with his alien nonsense, and lo and behold, all these years later, Tom doesn’t even do music anymore because of his culty alien company or whatever. How nuts is that? I called that shit. I trusted my gut, and it didn’t lead me wrong, just as Frodo must trust his own gut now.”

4. The time Gandalf told the story of getting his teeth knocked out in a mosh pit during a Wonder Years set and then proudly showing off his badass, toothless look for the next month

When Gollum betrays Frodo by leading him to the great spider Shelob in the tunnels of Cirith Ungol, Frodo is nearly killed, and comes as close as he ever would to giving up on his quest altogether. Knowing that the survival of all of Middle-earth was hanging in balance, Gandalf grabbed a frustrated Frodo by both shoulders and tried setting things back to an even keel by telling him another story from Warped Tour:

“Frodo, listen to me. I’ve been around for a long time, and I can tell you that you are not the first Keeper of the Ring to be betrayed, and you likely will not be the last. Here’s something else I can tell you: When I was at Warped Tour in 2009, I got my teeth knocked out in a mosh pit, and it was awesome. I was at the Wonder Years set and was so fucking amped because I’d seen them in smaller venues plenty of times before, but seeing, like, 4,000 people go wild for them made me go absolutely nuts. So I decided to push my way into the mosh pit, which I only ever do if I’m super jacked up, and the moment I got in there I got helicoptered in the mouth by a giant, mohawked motherfucker’s fist. He knocked out my two front teeth clean and cracked one of my bottom ones, and Frodo, it hurt so goddamn bad. But check this out: Once the bleeding stopped and I drank enough Vlad from the crinkled up water bottle in my pocket to numb the pain, I saw that my new toothless look was actually badass. People kept coming up to me and asking what happened, and it felt like everyone was kind of viewing me in this new, tough-guy light. It was big for me. So at the time it happened, I felt down and dejected, similarly to how you must feel now after being betrayed. But later, when I left Warped Tour that day with like, four scene chicks’ phone numbers, it felt like a big win. It’s not too late for you to win as well, Frodo.”

5. The time Gandalf told the story of seeing a girl get kneed right in the eye by a stage diver during a Man Overboard set

When Frodo finally succumbs to the Ring’s power and puts it on, Gollum suddenly appears and bites the finger clean off, marking the absolute lowest, most dismal point of Frodo’s long quest. Gandalf can see that this could be the tragedy that prompts Frodo to finally give up on destroying the Ring, and in a last-ditch effort to keep that from happening, the wizard puts his arm around Frodo’s shoulder, walks him down the dirt path a little, and begins telling another gem from his Warped Tour days:

“You resisted the Ring far longer than any man I’ve ever seen, Frodo, and that is something to be proud of. Losing your finger is gnarly, yes, but not the gnarliest thing I’ve ever seen. Listen to this: I was at Warped Tour in 2010 catching the Man Overboard set when I saw an absolutely massive dude do a jack knife off the stage and knee a girl right in the goddamn eye, and it was one of the most fucked-up things I’ve ever seen in my 2,000 years walking this earth. Man Overboard isn’t really that kind of band where you’re supposed to mosh super hard and go buck-wild while jumping off the stage, and that’s what made it so shitty that it happened. The guy got a ton of shit from everybody in the crowd, and security came to take him away somewhere, but still, this poor girl got really drilled in the eye. Like, I wouldn’t be surprised if she lost that eye later. It was that bad. And it was a Man Overboard set, you know? There shouldn’t be anything crazier than a push pit for Man O. Seeing that whole thing unfold really messed me up for the rest of the day, and honestly, the situation with your finger isn’t even close to that bad. You’ll be fine, Frodo. You must carry on.”