5 Times Hagrid Was In Charge Of Throwing The Sex-And-Drugs Party For Quidditch Recruits, Ranked By How Depressing The Whole Thing Was 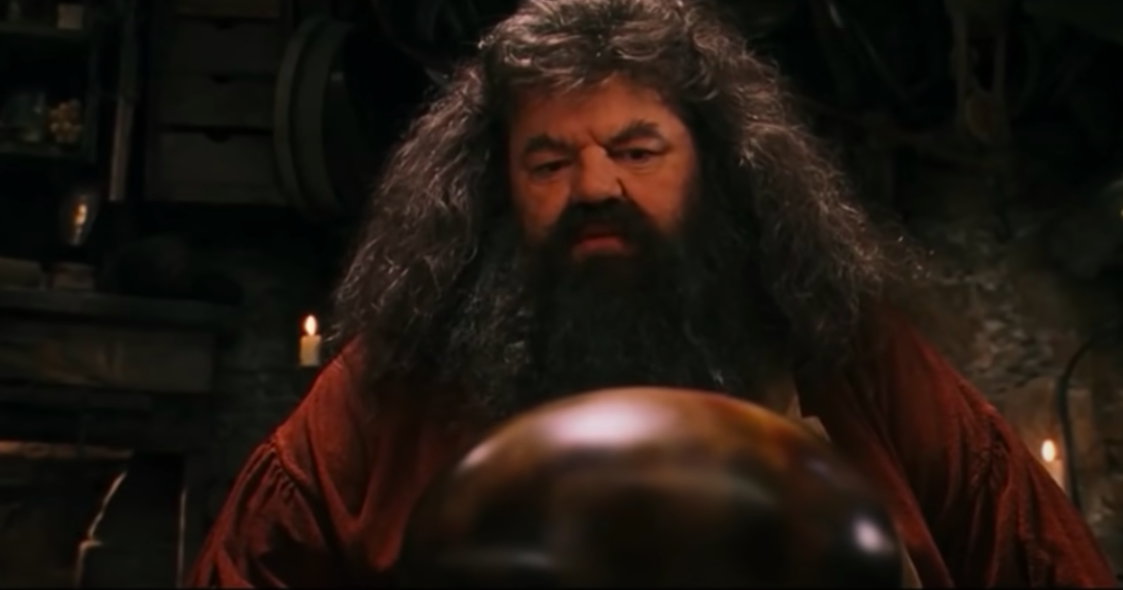 Star-caliber quidditch players are few and far between, and wizarding schools need to do whatever they can to lure five-star recruits to their athletic programs. But unfortunately these efforts can sometimes backfire, and nowhere do things more often go awry than at Hogwarts.

1. The time Hagrid did it surprise-party-style in the middle of the campus tour and Dumbledore ripped him a new asshole in front of everybody

The quidditch recruiting trip has always had a pretty straightforward formula: the kids show up in the morning for a campus tour from Dumbledore, they all go to a quidditch game in the afternoon, then there’s a huge, next-level party at night designed to get recruits super excited about the prospect of playing at Hogwarts. One morning when recruits were visiting, Dumbledore was showing them around the cafeteria and doing that whole backwards-tour-guide walk while hyping the daily omelet bar when all of the sudden Hagrid appeared and bellowed in his goofy-ass voice, “Welcome to Pleasure Island, young studs!” Everyone then turned to see Hagrid standing precariously atop a lunch table with a dozen or so strippers at his side, who all instantly went to work grinding all over these kids—some of whom were, like, 11, mind you—while “Party Rock Anthem” blared on a small light-up Bluetooth speaker. Dumbledore was so angered by the stunt that he immediately teleported the strippers out of the cafeteria with his wand and loudly laid into Hagrid for being a “useless, pig-brained fool” who “should’ve never been released from Azkaban”. Hagrid then burst into tears and apologized over and over with snot running down his face, saying that the new cocktail of antidepressants he’d been taking were affecting his judgement and he was just trying to be helpful. Dumbledore then ushered all the quidditch players away from Hagrid, leaving him alone in the cafeteria, where he quietly sobbed while eating the entire breakfast spread that had been prepared for the recruits by himself.

2. The time Hagrid got sloppy-drunk and unburdened himself about how he doesn’t know when his birthday is, like a rescue dog

On this occasion, Hagrid had a group of recruits over to his shed in the woods, which is an incredibly upsetting place to be. It’s basically just a dingy hovel in the middle of the forest that smells like Icy Hot and animal shit, but on this particular night, the recruits didn’t really seem to mind. A few of them had managed to get their hands on some beer, and everyone was just having a genuinely nice time drinking and hanging out until, somewhere along the line, someone made the mistake of giving Hagrid some beers, which he 100 percent could not handle. He almost instantly started putting his arm around people and saying off-putting shit, like, “You guys gotta let me know where you’re bunking next year so I can come live with you,” and, “Everyone thinks they’re better than me just because I don’t know how to read.” The recruits mostly just ignored him, but then he broke down in tears and began blubbering about how he has no idea when his birthday is, the same way people don’t know with rescue dogs.

“You guys are so lucky and you don’t even know it,” he said, his voice trembling, staring numbly at his can of Miller High Life. “Me, I don’t even have a birthday. Don’t know when it is, like I’m a damn dog!” He then took his shirt off, explaining he was overheated, before continuing: “It’d just be nice to have my own special day, y’know? A day when everyone has to be nice to you, when no one hurts your feelings or….” He trailed off and sort of just sat there for a while, making things extremely awkward for everyone there. A couple kids patted his back in support, but it wasn’t long before everyone started finding excuses to leave, and within 10 minutes or so all the recruits had fled, leaving Hagrid to sit alone in the dark, yearning for a birthday that he’ll never have.

3. The time Hagrid tried to magically summon a mechanical bull but instead created a real bull whose legs were essentially welded to the ground

This was another party that started off fine but quickly went south. Everyone was hanging outside in Hagrid’s yard because the inside was filled with dead animals Hagrid had been practicing taxidermy on. The recruits were just sipping on some 40s and having a pleasant time until Hagrid at one point stood up and declared, “Chooo boy, I’ll tell you what, all this party needs is a beautiful woman riding a mechanical bull, right? You ever see that? Nothing sexier than that.” The kids pretended like they didn’t hear Hagrid, but this didn’t deter him at all, as he suddenly whipped out his trusty umbrella—which, remember, he had to use for magic because his wand was confiscated years earlier when Dumbledore overheard him bragging in the teacher’s lounge about using it to stab a garter snake—and shouted, “Gimme some rock, gimme some roll, gimme a sexy mechanical bull.” This was clearly not the correct spell to use, as a real bull then appeared before them instead of a mechanical one, and its legs were basically soldered to the ground just below its knees. The thing instantly started shrieking and violently attempting to uproot itself, but to no avail. All it could do was yank and pull and moan in a wild herky-jerky panic, like a mouse stuck to a glue trap. Everyone was utterly horrified, and once Hagrid realized people weren’t having fun, tried to fix things using a different spell, but this only succeeded in setting the bull on fire—a sight that left all of the recruits deeply traumatized. With Hagrid unable to get the situation under control, a next-level-pissed-off Dumbledore eventually had to get out of bed and wander over to the party in his pajamas, where he then performed a spell that was meant to humanely euthanize the bull but instead made the poor thing start convulsing like a motherfucker for a good half hour before it finally passed away. It was later discovered that Hagrid’s spell had caused the bull’s hooves to take root in the ground like a tree, and the hoof-roots had spread so far that they couldn’t be dug out with a shovel. Hogwarts had to order a special CAT excavator to remove the animal, but it took a long time to ship, leaving the bull there to rot for a good few weeks, its nauseating stench wafting over campus every time there was a breeze. Just an absolute shitshow all around.

4. The time Hagrid demonstrated how to play the choking game, passed out for a good 45 minutes, and woke up with a permanent stutter

This recruit party immediately got off to a bad start, as Hagrid didn’t have any booze or drugs to facilitate the fun, leaving the kids bored and visibly pissed. Hagrid explained that he couldn’t buy them any illicit substances due to the fact that Hogwarts doesn’t pay him a salary and his government benefits card can only be used on basic groceries and stuff. However, he claimed that he knew something way more fun than booze and drugs, at which point he leapt to his feet, tied the rope he uses as a belt very tightly around his neck, and then violently choked himself for a good 15 minutes or so before eventually losing consciousness and falling chin-first into a brick ledge. For a while after, he sort of just laid there on the ground bleeding all over the place, looking dead as shit. And keep in mind that he never explained the choking game beforehand, so all of the recruits thought they had just watched him kill himself. However, after the initial shock subsided, a few kids started rummaging through Hagrid’s drawers and shit, looking for jewelry to pawn. Hagrid awoke about 45 minutes later to find that almost all of the kids were gone, and the ones who were left were lifting up his mattress looking for cash. “W-w-w-where is everyone?” Hagrid mumbled in a super pronounced stutter that would stay with him for the rest of his life. “Don’t you guys wanna party with me?” It was all so fucking depressing. Someone let Hagrid’s dog out while he was unconscious, too, and she was not the kind of dog who’s allowed outside because she runs away, and that’s exactly what happened. Hagrid whined and stuttered about this dog all night, wondering if the recruits took her back to the dorms maybe. But that dog was long gone. It took off into the woods and was almost immediately hunted down and eaten by a centaur. Just a sad situation start to finish.

After realizing that the parties at his shed never exactly went over well, one year Hagrid decided that the recruits might have more fun if he took them to a Russian bathhouse. The spa was about an hour away from Hogwarts in a lower-middle-class suburb, nestled in a largely vacant stripmall between a Petco and a dirty-looking pizza place whose door was held open with a cinderblock, and everything about it was super underwhelming. Not only was the place disgusting, but it was packed wall-to-wall with elderly Eastern European men in nothing but robes, their flaky, dead-looking dongs dangling freely before the kids’ eyes. The recruits were visibly uncomfortable, but for whatever reason Hagrid was having the time of his fucking life. The dude was in rare form. Maybe it was excitement of being away from Hogwarts for the first time in several years, or maybe he found all the ancient dongs titillating—no way to know, honestly.  But within the first 15 seconds of stepping inside that spa lobby, Hagrid giddily announced to the kids, “I’m getting a hand job today,” then proceeded to beg all of the masseuses there one by one to give him a handjob in exchange for Hogwarts class credits. Meanwhile, the unsupervised kids did what unsupervised kids do. They found the kitchen and stole a bunch of weird Russian beers and cans of whipped cream, got all fucked up on alcohol and whippets, and, only about 20 minutes after stepping into the lobby, one of the recruits got too fucked up and drowned in one of the cold-water pools, where he was discovered face-down in the water, drifting lifelessly near the chrome handrail by the stairs. This ended up being a huge nightmare for Hogwarts, as not only did the school have to pay out a massive settlement to the dead kid’s parents, but the quidditch program had all of its wins vacated and was served an unprecedented five-year suspension from league play. From that day forward, Hogwarts had no choice but to center its athletics program around the bowling team, which didn’t exactly bring in alumni dollars like the quidditch team did. It was a disaster scenario for the school, and it was all thanks to Hagrid’s utter inability to throw a decent party.