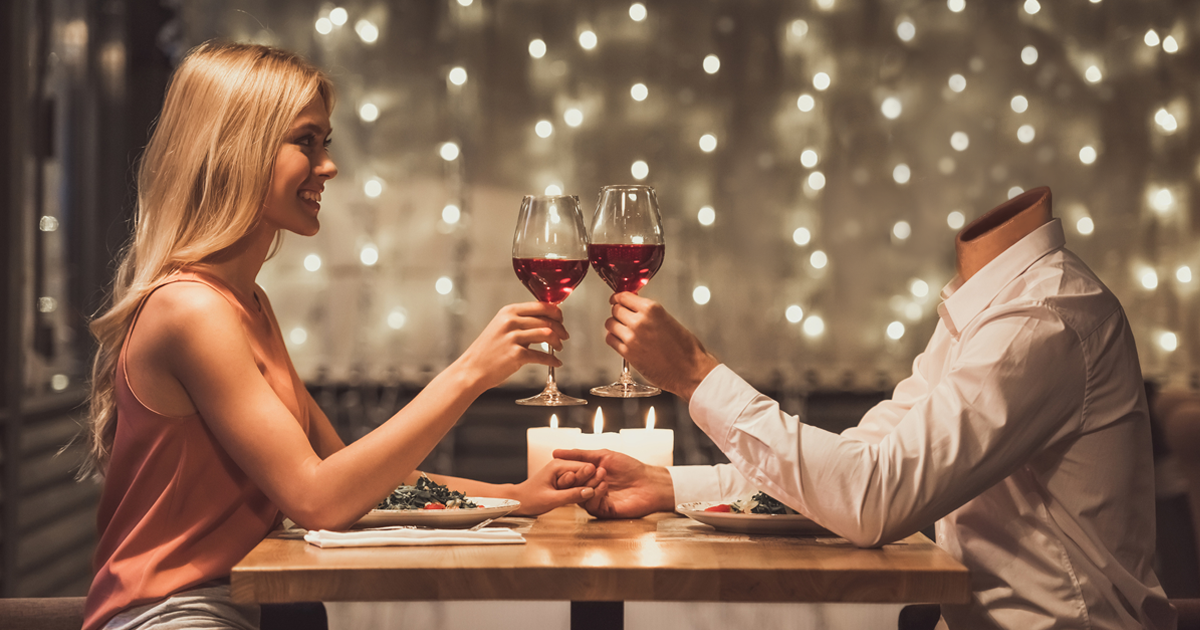 When I met the Headless Guy on Hinge last year, I didn’t think anything would come of it, but since then we’ve had an on-and-off relationship that all my friends say is super toxic. Still, I can’t seem to stay away.

1. The time I agreed to a second date with the Headless Guy because I found out we’re both huge House fans

The first time I met the Headless Guy for drinks at a bar near my place was pretty uneventful. I was definitely surprised when he said “Enchanté” to greet me and his voice came out of the huge hole at the top of his neck, and I was worried that people were staring at us every time he poured his vodka soda straight into his gullet, but we had a great time talking about the show House. The Headless Guy said he’s been to hospitals hundreds of times (presumably because of the head thing) and has never met a doctor as good as Dr. House. Anyway, at the end of the night he touched my lips with his elbow (his version of a goodnight kiss, I guess) and asked if I’d like to see him again, and I was so flustered that I agreed. When I told my friends about it that weekend, they all said that the Headless Guy seemed kind of weird, and that I deserved a guy with a head. They even had me repeat it after them: “I deserve to be with a guy with a head.” Still, I didn’t listen. There was just something about him.

2. The time the Headless Guy bought us season passes to Six Flags and I felt like I had to go at least once

I was considering ending things after a couple more dates because my friends said it was lame and insecure how the Headless Guy kept asking me if I’d rather be with a guy who “had somewhere to put a baseball cap,” even though I assured him multiple times that I didn’t really care about hats or heads or any of that. Anyways, one night he called me at 2 a.m. to let me know he’d just spent $675 on two Six Flags Ultimate season passes for us, and half-asleep, I agreed to go with him sometime. Then, one morning in July, he showed up outside my house in his Kia at the crack of dawn, and we drove two hours to the amusement park (I’m honestly not sure how he can drive, but it seems rude to ask). The Headless Guy wanted to spend basically the whole time on the spinning teacups, which kind of sucked, but by the end I convinced him to go on Kingda Ka, and I think he had fun even though he would get really scared and yell “We won’t survive this!” periodically throughout the ride. That night when I went out for drinks with my friends, Eliana straight up asked me if the Headless Guy even had a brain, since he had no skull. Everyone else agreed that he probably didn’t, and they made me swear up and down that I would never see him again. I humored them, but the truth was that that day at Six Flags was one of the best days of my summer.

3. The time I invited the Headless Guy to my friend’s baby shower and he sulked in the corner for three straight hours

The Headless Guy clearly wanted to spend more time with me, so I thought it would be fine to have him come as a guest to my friend Megan’s baby shower. That was a big mistake. As soon as we walked in, Megan did a huge, dramatic sigh, and Rachel went, “There he is again, the guy with literally no fucking head.” The Headless Guy is really sensitive (which I don’t think is a bad thing), so this caused him to run over to the far corner of the living room and sit down on the floor all sullen. We started playing games, like the one where you guess the baby’s weight, and I’d always go “Headless Guy?” to try to include him, but he’d just sort of wiggle his neck around poutily. It wasn’t fun, but I think that’s more my friends’ fault than the Headless Guy’s. After the shower, they texted me that he stole one of the “Welcome Baby” centerpieces, and I did find it under his bed. But they don’t need it anymore, so what’s the harm? Everyone started sending me big “X” and “NO” emojis, to mean, like, “cut him out!” I just texted them back the thumbs up and put the whole thing out of my mind.

4. The time I ran into the Headless Guy at the grocery store and ended up letting him make me a really bad bison burger

There was one week I hadn’t even made plans with the Headless Guy, and I had actually agreed to go on a date with one of my friend’s coworkers—a guy with a head—instead. But of course, I ended up running into the Headless Guy at Whole Foods where he was loading up his cart with dozens of tubes of Tom’s Of Maine toothpaste even though he doesn’t have teeth (maybe he eats it?), and when he saw me he got super excited and insisted I come back to his place to try his famous bison burger. What was I supposed to do? I admit that watching him make the burger was kind of disturbing because he did it in the microwave, and he seemed not to know what ketchup was when I asked for it. But even though the meal kind of tasted like shit, I had a nice time overall. He told me about his work week (he’s a substitute teacher) and we watched some New Girl on his beanbag chair. Honestly, it was nice—probably much nicer than whatever my friends were doing with their loser boyfriends.

5. The time the Headless Guy basically ghosted me but I begged him to be my plus-one to my cousin’s wedding anyway

So, the next couple weeks were rough, because I texted the Headless Guy at several points, just casual things like asking how his day was, and whether he was enjoying his Tom’s toothpaste, but for some reason he never responded. I realized that I missed talking to him, and I was admittedly kind of worried that he had found someone else. After 15 straight days of him ignoring me, I finally couldn’t take it anymore, and I went over to the Headless Guy’s apartment in person to see what the deal was. I found him just sitting on the stoop bouncing a ball on a ping pong paddle, and when I confronted him about his silence he just put his hands on the top of his neck hole area and said he was sorry. I had all my friends’ voices ringing in my head (“He’s got no teeth,” “He’ll never be able to do a headstand,” “You can do way better than a guy with no teeth!”), but I forgave him instantly, and I said it would mean the world to me if he’d come to my younger cousin’s stupid wedding. And guess what? He went with me, and we had a great time. He knows how to swing dance, and he even gave a super-religious impromptu toast about the sanctity of my cousin’s commitment to her new husband, which was kind of weird but also moving. He showed that there’s a lot more to him than just not having a head—he’s thoughtful, sincere, fun to be around, and surprisingly romantic. And, honestly, that’s pretty much all I’ve ever wanted in a potential partner. The whole not-having-a-head thing has turned out to be a non-issue, and I wish I hadn’t listened to my friends’ concerns about it for so long. I should’ve just listened to my heart, which feels very full whenever the Headless Guy is around.