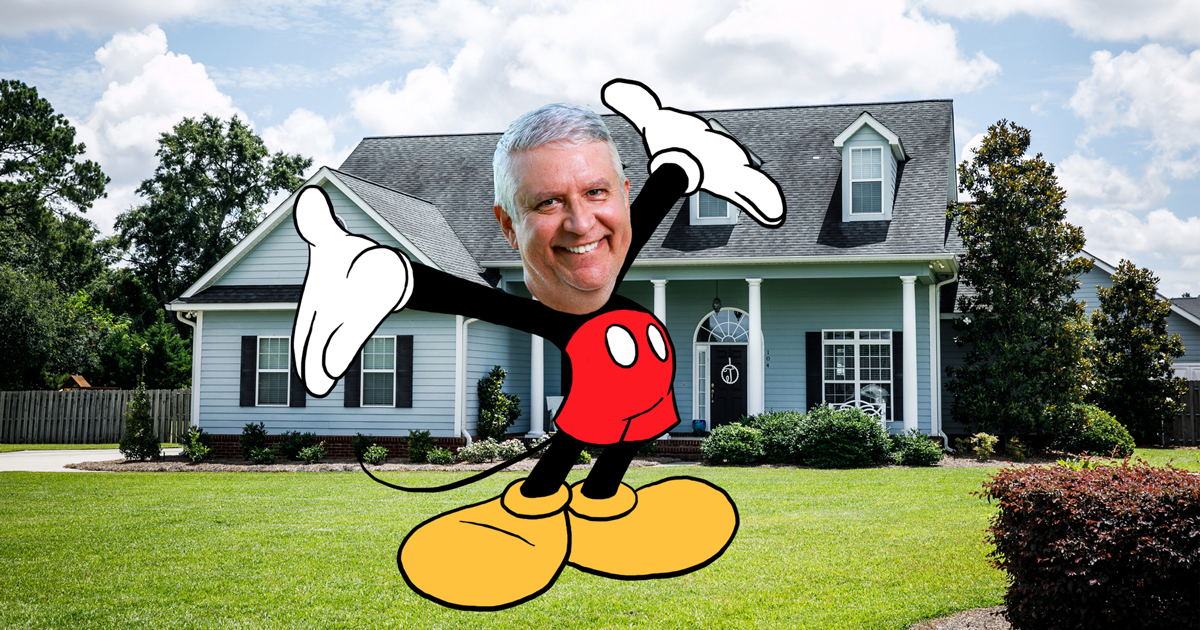 My wife Maria and I have been married for 26 years. For the most part, we’ve had a loving relationship, but her insistence on photoshopping my head onto Mickey Mouse’s body has caused our marriage to suffer.

The first time I caught my wife photoshopping my head onto Mickey Mouse’s body was the day after I’d gotten her a new computer for Christmas. She’d just finished setting up the computer, and asked me to leave the room. After an hour, I came back in to see how she was doing, and for the first time, I saw it: my head, slapped onto the cartoon body of Mickey Mouse. At this point, her Photoshop skills were still crude, so my head area still contained the background from its original image—a photo from our wedding day, with half of the smiling face of her father standing behind me. There was also a very small caption below the image that said “HUSBAND MOUSE.” There was something very unnerving about it all, but I couldn’t pinpoint it.

I asked her what she was doing, and she quickly tried to shut off the computer, but she instead hit the wrong button and just ended up making the screen brighter, searing the image into my brain.

“Whoa, how did this happen?” she said, feigning surprise. “Hon, I think this computer might have a virus or something. It just randomly put a picture of your head on Mickey Mouse’s body. Kinda cool looking, but still. Not sure what’s going on.”

Clearly, though, she did know what was going on. I got the sense she’d been planning this for months, ever since she first expressed interest in getting a computer. The photoshop was too specific to have been an accident. And instead of deleting it, she decided to save it to the hard drive, explaining that she figured she’d keep it around “just in case Disney ever holds a contest we want to submit it to.” It was bizarre, but I assumed this would be the end of it. I was wrong.

I caught Maria photoshopping my head onto Mickey Mouse’s body about 45 minutes before the first tower came down. We’d been glued to the TV watching news of the attacks all morning, but at some point I remember looking up and realizing she was no longer next to me. Turns out she’d wandered off to the basement, where I eventually found her hunched over her computer,  carefully cropping my head onto the headless body of Mickey Mouse, and muttering, “Dear God, please protect America, and please protect my computer and all its files,” over and over to herself. I said nothing, and slowly backed out of the room.

Looking back on it, I wonder if she was doing this to console herself. That in the face of such unprecedented horror and chaos, perhaps she needed to do something that felt familiar and comforting. But even if it comforted her, it did the opposite to me. In a moment when the whole country was coming together to share the strange intimacy of grief, I felt very distant from my wife. Every time they’d play back the horrifying footage of those towers crumbling on TV, I couldn’t help but flash back to that unsettling image of my head crudely photoshopped on Mickey’s body.

I thought about saying something, but given what had happened to our country that day, bringing up Mickey Mouse in any capacity just felt inappropriate. So I just stayed quiet and watched the news in silence until I fell asleep. .

Years passed. I began to think that what had happened on 9/11 was nothing more than a fluke. Just a momentary lapse in judgement brought on by the deadliest terrorist attack our country had ever seen. But, of course, I would later find out that it was not, in fact, a fluke.

On April 13th, 2006, I unexpectedly got off work a few hours early. I thought I’d surprise my wife by coming home and taking her out for a late lunch, but when I walked through the front door, I found her sitting on the living room floor with her laptop plugged into our 60-inch TV, blasting “Ava Maria” and photoshopping my head onto Mickey Mouse’s body with the care and precision of a brain surgeon. This time she’d photoshopped me in front of the Great Pyramids and had included a speech bubble coming from my mouth that said, “I am the modern-day Sphinx, and I am married to my wife!” Her skills had improved greatly over the past five years.

“Oh, hi, you’re home early,” she said, acting like nothing unusual was going on. “I’m working on my submission for the contest.”

“What contest?” I asked.

“I told you about it. It’s the Disney contest, where they want to see pictures of your head on Mickey Mouse’s body. It’s a very important contest. They need all the data they can get.”

“Data for what? I’m confused.”

“You know, just, like, data,” she said while quickly gathering up her things and fleeing to a different room, seemingly in an effort to escape further questions. “Don’t worry about it.”

I saw my therapist later that day and expressed my concerns over the situation, but she didn’t see any cause for alarm. In fact, she seemed oddly interested in what my wife was doing and spent the entire session asking me questions about the photoshops and where she could find high-res images of Mickey Mouse so that she could also make some photoshops to submit to the obviously fake contest my wife had invented as a cover for her behavior. I left feeling even more upset than before, and when I got home, my wife could sense the tension.

“Do my photoshops really bother you that much?” she asked, putting her hands over mine.

I told her that, yes, the photoshops did bother me. I told her that I didn’t want to have white gloves or yellow shoes. I didn’t want red overalls or a damn rodent tail. I just wanted her to love me for me. She nodded along as she listened, and she genuinely seemed to realize that her behavior was hurting me. She went quiet for a few moments and then, with tears in her eyes, promised me that she’d stop photoshopping my head onto Mickey Mouse’s body.

And she did, for nearly 8 years.

Our first child was born in 2008, our second in 2011, and those two kids quickly became our entire world. There was no more time to lend to things like photoshopping my head onto Mickey Mouse, or worrying about having my head photoshopped onto Mickey Mouse. During this period, I felt closer to my wife than I ever had before. We’d started a new chapter, a new family, and things almost felt too good to be true. And that’s because they were.

One night, after I thought she had gone to bed, I heard the printer turn on. I walked over and found a piece of paper lying in the printer deck. I picked it up and found my head photoshopped onto a Steamboat Willie-era Mickey Mouse, with the phrase “OLD TIME DELIGHT” written in large type underneath. She must’ve hit print by mistake.

What I did next surprised even myself. I went to my laptop, opened up Photoshop, and then I must’ve blacked out, because the next thing I knew I had entered our bedroom where she sat, my laptop in one hand, the sheet of paper in the other.

“Honey, I have great news! Disney is doing another contest, and they need my data!” she said when I walked in. “I know you’re not crazy about me making my photoshops, but this opportunity is just too good to pass up. If I do a good enough job putting your head onto the mouse, we could win the grand prize!”

I said nothing. I just sat down next to her and opened my laptop, revealing that I had photoshopped her head onto the body of Marge Simpson. I had done a pretty terrible job and my wife’s head covered about half of Marge’s body, but I got the message across. My wife now understood how it felt to have your soulmate crudely photoshop your head onto a cartoon character. A single tear fell down her cheek.

The next morning, she revealed to me that she’d deleted the Photoshop software from her computer. She promised to never photoshop my head onto Mickey’s body ever again. We embraced each other tightly, feeling the fullness of our love and all its preciousness—a silent commitment to each other, to our marriage, above all else.

Our 26th anniversary. We sent the kids to my mother’s and had our first night on the town in years. We went to a steakhouse and afterward we walked around town until late at night. Then we went to a hotel and made love. It was the happiest I’d been in some time.

Later that night, I woke up and could not fall back to sleep. I decided to wander around the hotel. When I got to the lobby, I saw my wife sitting at a computer in the little business center area. In the hard drive was a USB stick she apparently brought from home, with Photoshop preloaded onto it. Several hotel employees crowded around her as she photoshopped my head onto Mickey Mouse’s body. This time, she had cropped me into a still from the Zapruder film and had a red arrow pointing at me with the caption, “JFK’S KILLER.”

“Oh, hi, babe!” she said in a disconcertingly chipper way. “Did you hear? Disney’s doing yet another contest with the husbands and Mickey Mouse and the data and whatnot, and there’s a really big grand prize this time, so just figured I’d make an entry real quick.”

I turned around and went back to the room without saying anything. I sat alone on the bed for hours, struggling to come to terms with what I had known deep down for decades now: that my wife wished I had the body of Mickey Mouse. And while I didn’t understand it, I realized right then and there that I needed to accept it. The truth was painful, but not unbearable, and I knew our marriage could survive it.

So I decided to just live with it. Yes, that means that I’m destined to a life of occasionally stumbling on my wife photoshopping my head onto Mickey Mouse’s body, but that’s okay. It’s worth it if I get to be with her, because at the end of the day, I still can’t imagine a better partner, better mother, better lover, or better friend, and I’ll endure as many Mickey Mouse photoshops as necessary to keep her in my life. Hell, I’ll even play along with it. I actually just bought a Mickey Mouse mascot costume without the head on eBay, and I’m going to surprise her and put it on later tonight. Sure, it’s a bit old, it stinks, and the tail was clearly taken from some sort of dragon mascot—but I know she’ll love it. I know she’ll love me.