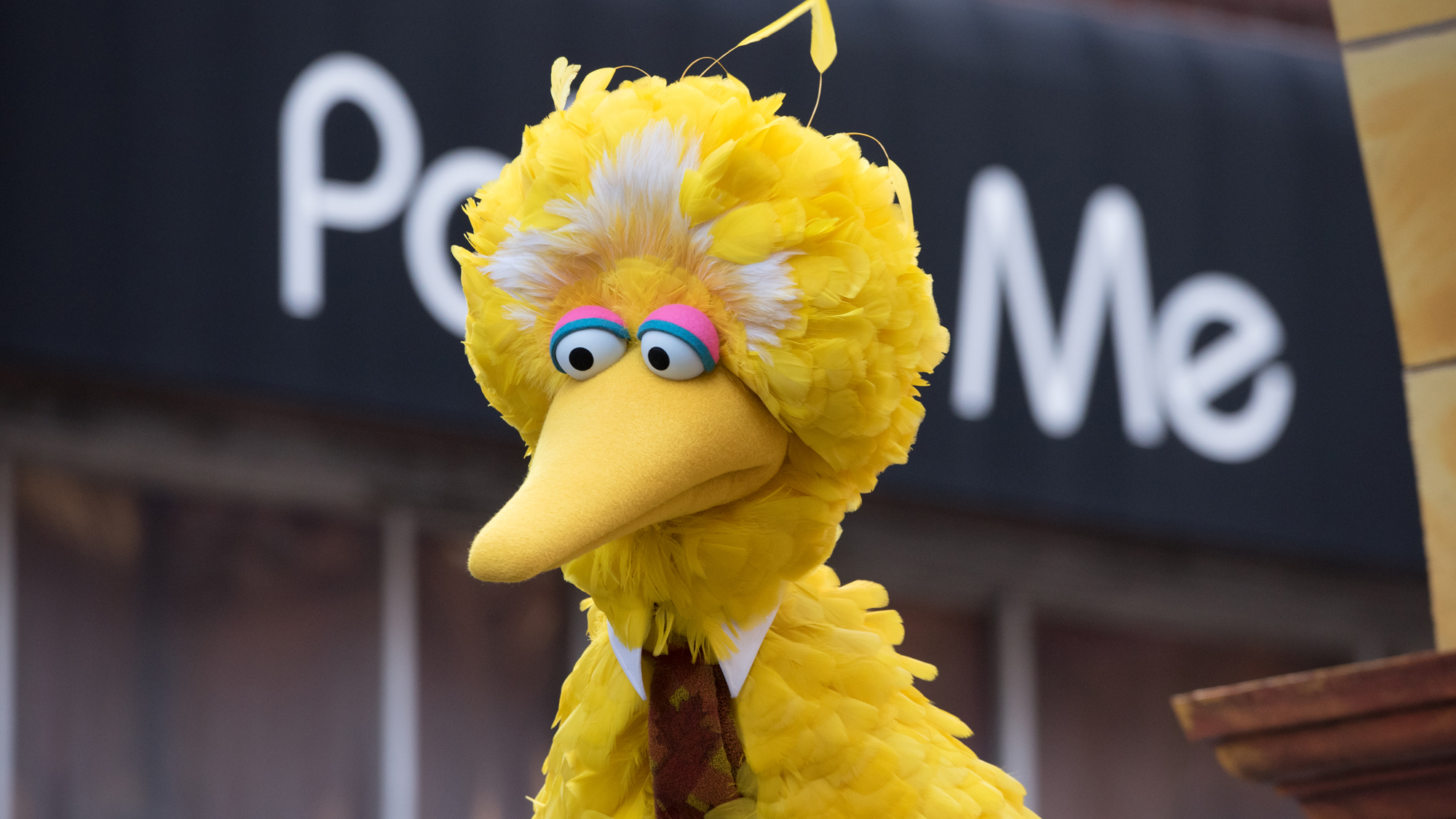 Big Bird has long been educating kids on some of life’s most important lessons, but that doesn’t mean everything he says is always a grand slam. Here are five times on Sesame Street where Big Bird incorrectly explained to a kid that each of the pink rings around his legs represents 100 years that he’s been alive.

1. The time Big Bird called an audible mid-episode by changing the Word of the Day from ‘sharing’ to ‘quasi-eternal’

Everything was par for the course on the April 9, 1998 episode of Sesame Street until it came time for the daily Word Of The Day segment. Just as Bert and Ernie were finishing up a staged argument over which one of them could use their toaster, which was just meant as a way to get into the definition of “sharing,” Big Bird interrupted with something he figured was far more important:

“Wait, hold on, no one cares about what you two are doing,” Big Bird suddenly blurted out as he walked into frame to stand in front of Bert and Ernie and face the group of onlooking kids. “You are boring everyone to tears, and in any event, I have something far more important to say that I just remembered. I’m going with my gut right now and am deciding that today’s Word Of The Day is now “quasi-eternal,” which means to basically live forever but not quite. One great example of “quasi-eternal” is me. I don’t think I ever told you guys this, but each of the pink rings circling my fleshy orange legs represents 100 years that I’ve been alive. There are now eight rings in total, which means I’m 800 years old. To all of you, I must surely seem like I’ve been around forever, but I’m actually just very old. That makes me quasi-eternal, like an alien or an ocean. Every night, I pray to understand what I’m meant to do with the extra time I’ve been given, but no god ever hears me.”

All the surrounding kids and Muppets stared quietly at Big Bird during his long, wildly incorrect speech until he finally petered out while proudly talking about how he’s older than the atomic bomb, at which point Elmo kind of laughed and said, “You’re funny, Big Bird,” which got everyone laughing little. After that Big Bird just blankly stared down at the ground for the rest of the episode, seeming like he was pretty deep in thought.

2. The time Big Bird argued against Elmo’s lesson about the importance of oral hygiene by saying that he’s never once cleaned his mouth and has lived for almost 1,000 years

It didn’t take long for Big Bird to once again fire off his insanely incorrect explanation about his age. The very next day, on April 10, 1998, right as Elmo was about to throw to an animated segment about the importance of going to the dentist, a clearly stewing Big Bird angrily interrupted Elmo to talk about the pink rings around his legs:

Then Big Bird turned to the kids who were watching this spectacle in stunned silence. “Kids, don’t listen to this weak little worm, this snail. You don’t have to brush your teeth. You don’t have to go to the dentist. Take me as an example. According to the pink rings on my legs, I’m 800 years old, and I’ve never once brushed my teeth. It’s boring and lonely because you almost always have to do it while you’re alone, so I just don’t. If you never go to the dentist, you can live just as long as me. If you don’t wash out your mouth, you’ll never put your parents through the hardship of your death, because you’ll outlive them by hundreds of years. Listen to me.”

Having said his final piece on the matter for the time being, Big Bird then walked past Elmo, did a quick a fake punch wind-up in the confused Muppet’s face that made him flinch like crazy, and then laughed and muttered, “Exactly,” before walking offstage. The rest of the episode was pretty tense from then on out.

3. The time Jack Black made a guest appearance to help Grover teach a lesson about octagons and Big Bird interrupted to ask Jack Black if he’d instead like to teach the kids how Big Bird could possibly be centuries old

Jack Black and Grover were midway through a perfectly fine segment about octagons having eight sides and eight points during an episode on March 20, 2005 when Big Bird somehow got it in his head that Jack Black was annoyed by how easy the lesson was and wanted to teach the kids something more challenging:

“This is obviously child’s play for Jack Black,” Big Bird piped up while walking into frame. “Everyone here knows what an octagon is, and if you don’t, you should turn yourself into your guidance counselor right now because there is something wrong with you. I think Jack Black would enjoy himself more with a more challenging lesson, so here is a new one that he could try taking a crack at: Each of the pink rings around my legs represents 100 years that I’ve been alive, which currently marks me at 800 years old. I am older than democracy itself. I cut my teeth with Genghis Khan. But how can that be? The answer lies in my size. I’m so large, basically the size of a golf cart up on its hind wheels, that time affects my body more slowly, basically the opposite of how tiny bugs’ life spans can sometimes only be a few days. But how much longer can I live? Why do I experience time this way but other giants, say, Shaquille O’Neal or any run-of-the-mill bar bouncer, do not? These are questions I’ll throw to Jack Black to answer.”

Along with everyone else, Jack Black was pretty taken aback by all of the absolute nonsense Big Bird had spewed, and ended up just kind of riffing on buzzwords like “gravity” and “space-time” and “life span” for a few minutes while Big Bird stared super seriously at him, all until a commercial break finally came and he got to go home.

4. The time the kids were all talking about their favorite family holiday traditions and Big Bird explained that he doesn’t have any because by the time he knew his parents, they were each 3,000 years old and spent all their time begging to be put down

The kids were all taking turns happily talking about their favorite parts of the holidays in a 2008 episode when Big Bird brought the mood down in a pretty big way. When it was his turn to talk about his favorite family Christmas tradition, he incorrectly explained that regardless of the time of year, the only thing his parents ever liked to do was beg to be euthanized because they were 3,000 years old:

“All of your holiday traditions sound great, everybody,” Big Bird excitedly said to the group of smiling kids sitting around a Sesame Street stoop. “I wish me and my folks did stuff like that, but we didn’t. By the time I knew my parents, they were each pushing 3,000 years old and were more insane than I could put into words. My mom and dad had so many pink rings around their legs that they looked more like sour, wet hot dogs than legs. As far as spending time together, the only thing we ever did as a family was, every so often, one of them would grab me by the collar and say, “You gotta pull your weight around here by killing your parents. The longer we are on the Earth, the faster we perceive time. The last 600 years have felt like they’ve gone by in 10 minutes, and it’s snapped our minds like a Slim Jim. Put us to sleep humanely, inhumanely, we don’t care. If you’re not going to kill us then at least call the government to come pick us up and imprison us in a lab. They can poke and prod at us as much as they’d like, so long as when they’re done they do the right thing by leaving us baking in a hot car until the vultures are clawing at the doors and windows to get inside and eat whatever miserable pile of flesh and feathers is left of us.”

By the time Big Bird had finished his 100% incorrect recounting of his childhood, the vibe on the stoop had obviously changed pretty drastically. The kids had lost their enthusiasm for talking about Christmas and Hanukkah, and instead quietly mumbled stuff like, “Sorry to hear that, Big Bird,” and, “Bummer, man,” all while Big Bird looked around and nodded and smiled like an absolute imbecile until the Count came and kicked off some new segment about the number seven that no one was in the mood for.

5. The time Big Bird lashed out at the kids for not appreciating sterilized cookware enough and incorrectly explained that his brothers and sisters, who all died of dysentery in the 1400s, would’ve killed to have clean food

Big Bird wasn’t even on camera when he incorrectly explained that each of the pink rings around his legs represents 100 years that he’s been alive for the fifth time in Sesame Street history. During an episode in 2013, while Gordon was handing out some cupcakes he’d baked to the kids hanging outside of his 123 Sesame Street brownstone, Bird Bird’s shouting, non-mic’d voice could be heard echoing in from somewhere off screen:

“You kids have no idea how lucky you are,” Big Bird angrily shouted from some undisclosed location, leaving the kids and Gordon to confusedly look around to see if he was watching them from somewhere or what. “You all just eat your cupcakes without thinking for a second that they might be a filthy, contaminated death sentence. You have the luxury of assuming your food is fine. Well, guess what, my dozens of brothers and sisters would’ve loved to eat sterilized food, too, but they couldn’t. When we were all alive together in the 1400s, with only a few pink rings around each of our legs—each representing 100 years we’d been alive—we didn’t have sterilized cookware. We didn’t know what sterilized even meant. We ate whatever we saw—plants, bugs, smaller birds and dogs, ocean water, leather, you name it—without even thinking about it, and the lack of sanitation killed my siblings. One by one, the diarrhea came shooting out of their bodies like hot fireworks until they were murdered by it, dying as they crouched in private behind some bush or a dirt mound they had built to hide themselves, leaving a big gross mess behind for me to deal with. I was the only one who survived, just to watch you all eat your cupcakes centuries later, totally taking clean food for granted. Makes me sick.”

It was then that Gordon finally spoke up to say, “Big Bird, you know none of that is true, right? Why are you lying?” but Big Bird just kept on talking over him from wherever he was offstage, repeating over and over, “Can you let me finish? Let me finish! I’m talking, thanks, you can wait until I’m finished.” Gordon eventually just sighed and shrugged and let Big Bird’s idiotic rant continue until a commercial break finally cut him off.