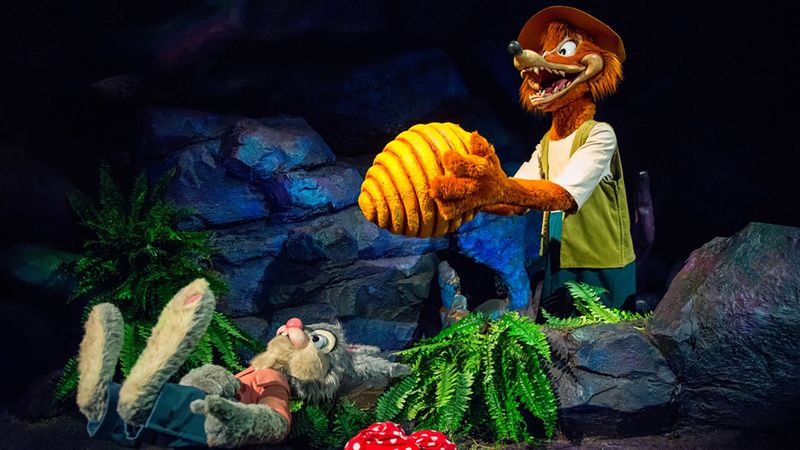 I recently went on vacation to Disney World with my family. It was a lot of fun until I went on Splash Mountain. There are a lot of animatronic animals on that ride that sing and dance before you go over a big drop at the end, and although most of these robotic animals are wonderful to watch as you float down the river, there was an animatronic fox that started addressing me by name halfway through the ride. He told me that he was going to marry my dad. He did that five times.

1. The Time The Animatronic Fox Made Eye Contact With Me

I was riding Splash Mountain, and the animatronic fox was doing his preprogrammed speech about how he wanted to catch the animatronic rabbit. The fox said, “Now’s our chance to set a trap for Br’er Rabbit!” Then it turned and looked me right in the eyes and said, “I’m going to marry your dad, Ryan.” Then the fox leaned in real close to my face, which I’m pretty sure it was not programmed to do, and he said, “Call me ‘Mrs. Dad,’ Ryan. I’m going to be your dad’s bride at his wedding.” Before he could say anything else, I had floated away from him to enjoy the rest of the magic of Splash Mountain.

2. The Time The Animatronic Fox Kept Talking About How Long The Wedding Would Take When He Married My Dad

The big drop at the end of Splash Mountain was so fun that I decided to get back in line and ride it again. I was having a blast listening to all the robotic animals sing and move around until the animatronic fox once again turned to me as I floated past. It started to say, “You sure done made a fool of yourself, Br’er Bear!” but about halfway through the line he trailed off, turned around, and said, “Welcome back, Ryan. I’m going to marry your religious dad and the wedding is going to take forever. Everyone’s going to talk so slow and your dad and I are going to kiss 100 times. Your dad is going to get down on his knees and thank Christ for making his wedding to the robot fox take so long.” I tried to tell the robotic fox that I didn’t want that to happen, but I had already floated away from him.

3. The Time The Animatronic Fox Told Me That He Was Going To Wear My Clothes When He Married My Dad

I had decided not to go on Splash Mountain anymore, but then I remembered how fun the big drop at the end was and I got back in line. I was hoping the animatronic fox would just do his clockwork movements and prerecorded lines, but instead he popped up out of the water in the middle of the ride and said, “Your dad is my fiancé, Ryan. I’m going to wear your shirts and your pants when I marry your dad. Your dad’s going to wear a wedding dress and we’re going to be bonded in the eyes of Christ. Enjoy the rest of Splash Mountain, Ryan.” After the ride, I told the Disney World employee working the line what had happened, and he just said, “That sounds bad.” But he didn’t do anything.

4. The Time The Fox’s Voice Came Out Of The Animatronic Goose

I just couldn’t stay away from that incredible drop at the end of Splash Mountain, so I got right back in line. There is an animatronic goose on Splash Mountain who mostly sings and babbles about being careful on rivers. One time, when I was floating past the goose, it stopped singing, swiveled on its metal hinges to face me, and said to me in the fox’s voice, “Ryan, it’s me. It’s the fox. I’m going to marry the ever-loving shit out of your religious dad. Listen to me, Ryan. Our wedding will not have any refreshments. Guests will be permitted to bring one bowl of warm water from home, but that’s it. Once I marry your dad, I’m going to become a huge part of your life. Have fun on the big drop.” Then the goose’s voice returned to normal and it sang a song about fishing. I do not want to attend a wedding where there is no food, especially since the fox said it was also going to be very long.

5. The Time An Animatronic Model Of My Dad Appeared Next To The Fox

I had promised myself I would never ride Splash Mountain again, but on the last day of vacation, the siren song of the big, fun drop lured me right back into the den of the clockwork fox and his wet carnival of torment. When I got to the animatronic fox, he was standing next to an animatronic model of my father, which sparked and sputtered as he moved back and forth in repetitious motion. My log boat stopped right at that scene, which it hadn’t done any of the other times before, and the animatronic fox started saying things like, “Hello, Ryan. Your dad and I are going to be each other’s wives,” and, “You’ll have to watch me marry your dad through the window of the church because you’re not allowed inside, Ryan.” Then the animatronic model of my dad said, “I love marrying the fox more than I love having a son!” and then it burst into flames. As the ride finally lurched forward on the river and I floated away from this horrific scene, the fox called after me, “I’ll see you and your real dad at the wedding, Ryan!” I tried to call back, “Please don’t do this!” but my voice was drowned out by the sound of the robot porcupine singing about the dangers of being foolhardy.