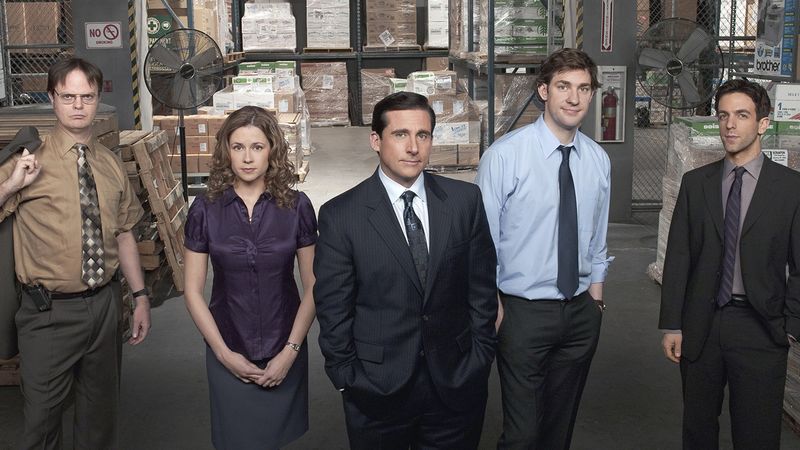 From ‘The Office’ to ‘House Of Cards,’ some of the most popular shows on American television have been based on shows that originally aired in the United Kingdom. Here are some of our favorites!

Based on the British sitcom Just A Moment Dear, I’ll Buzz You In.

Before bringing the acclaimed sitcom to American audiences, Jerry Seinfeld and Larry David were famously inspired by the British sitcom Just A Moment Dear, I’ll Buzz You In, a show about a British accountant named Jerry Christianson who would get into a series of comical adventures with his best friend, George Church, his ex-girlfriend, Elaine McCarthy, and his zany neighbor, Sergeant Cosmo Kramer, a veteran of World War II. The show aired from 1977 to 1983 on the BBC.

The series ran for two seasons, each six episodes long, plus an hour-long Christmas special titled “A Very Just A Moment Dear, I’ll Buzz You In Christmas.” In this episode, Jerry and the gang must explain what Christmas is to Margaret Thatcher (portrayed by British comedy legend Paul Whitehouse) after she falls off a ladder and suffers a head injury that causes her to forget everything she knows about Christmas.

Based on the British drama The Marvelous Mr. Pemberton.

Vince Gilligan’s iconic AMC drama is based on The Marvelous Mr. Pemberton, a masterpiece of British television about the headmaster of a boarding school in the English countryside who turns to synthesizing and selling ecstasy in the early ’90s.

The show ran for two seasons, each consisting of three 90-minute episodes, plus a two-hour-long Christmas special in which the Marvelous Mr. Pemberton is finally captured by Santa Claus and sentenced to five years in prison for his crimes.

Based on the British show Pots And Pans.

Lena Dunham based her hit HBO series on the popular British drama Pots And Pans, which focused on a close-knit group of young female twentysomethings struggling to find jobs and husbands in the horrifying years following the First World War.

The series ran for one season consisting of two 20-minute episodes, and was capped off with an hour-long Christmas special in which the women of Pots And Pans must help a time-traveling Charles Dickens return to the Victorian era.

Based on the British sitcom If It’s Not Custard, It’s Mustard.

The popular American sitcom was an adaptation of the British show If It’s Not Custard, It’s Mustard, which takes place entirely in a run-down London pub and is set during World War I and World War II at the same time. The name of the show is a popular British proverb that essentially means, “If it’s not one thing, then it’s a different thing that rhymes with the first thing.”

Based on the British science documentary Laurence Olivier Presents: The Heavens: A Journey Into The Mind Of Outer Space.

The beloved American space documentary narrated by Carl Sagan was adapted from the BBC program Laurence Olivier Presents: The Heavens: A Journey Into The Mind Of Outer Space, which was written, directed, and narrated by the unparalleled actor Laurence Olivier. Though Olivier was criticized for taking considerable creative liberties with scientific fact, his performance was universally praised.

The series ran for one season consisting of three five-hour-long episodes, “Mercury,” “Meteors: Part I,” and “Meteors: Part II.” There was also an hour-long Christmas special titled “A Yuletide Comet Comes To Town,” in which Olivier must help Santa Claus learn how to ride on a comet after his flying sleigh gets shot down by a power-mad American CIA agent.

Based on the British sitcom And Jeffrey Makes Eleven.

The Emmy-winning American sitcom can trace its origins back to the hallowed British comedy And Jeffrey Makes Eleven, a show about an unconventional family consisting of eight parents and three children. Every member of the family was 45 years old. The show ran for one episode, which was 23 seconds long. It is generally considered one of the greatest programs in the history of British television.

The show returned briefly for an hour-long Christmas special titled “And Eight More Jeffries Make Nineteen,” in which the eight parents all become pregnant via Immaculate Conception and give virgin births at the same time to eight grown men named Jeffrey. They are all 45 years old.