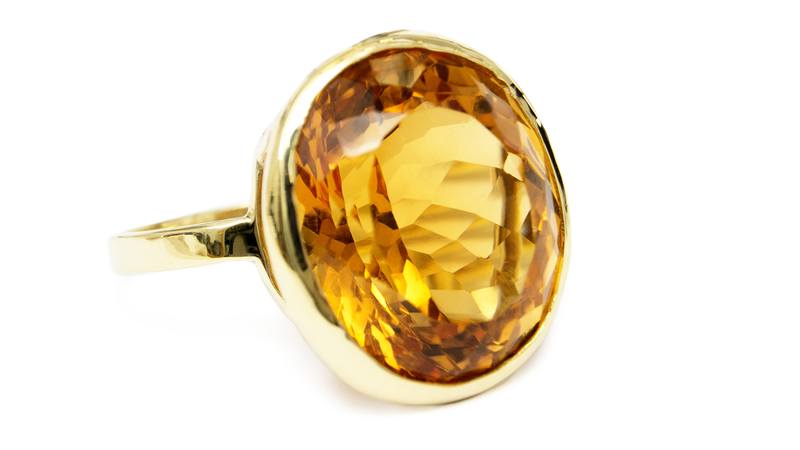 O, sweet Lorenzo! He may not know right from wrong, but beneath his inborn vagrant nature flickers an ember of nobler tendency. Here are six pieces of beautiful jewelry that he stole to put on his dear sleeping Uncle Matteo so the weary old man would wake up feeling like a king.

Lorenzo yanked this marvelous artifact from the supper jacket of a monied tourist who stopped to applaud him as he performed somersaults in the town square for pocket change. Then, after scurrying off to his mud-floor shack, where his dear Uncle Matteo was snoring atop his mat of scattered straw and rags, Lorenzo gently fastened the pin to the old man’s rabbit-skin vest so as not to disturb him. “A river gnome visited in the night and brought me good fortune!” Uncle Matteo cried upon waking up the next morning, proudly admiring the emerald pin in the shard of mirror his wife, Baba Tezia, uses to pluck her chin hairs. “Everyone come and see! Matteo is the richest man in all of the land!”

Lorenzo led the constable on one hell of a foot chase after being spotted nicking this gorgeous sterling silver piece from a woman’s purse, darting through crowded markets and hopping fences to evade capture. “I don’t know what I have done to deserve this, but the river gnome has once again shined his grace upon me,” Uncle Matteo whispered in awe, his broad idiot’s brow crinkling with emotion. “If only my first love, Lavinia, were still alive to see this.” Feeling regal, he then hollered out the window for all the neighbors to come kiss his new ring. “Come, kiss Matteo’s ring. Look at me, a man who owns many slaves and has a luxury toilet all to myself. Come, kiss my ring or I will hang you.”

Having had nothing to eat since his potato water and bits of herring from the night before, Lorenzo wanted so badly to trade this watch chain for pocket money and stuff his face at the sweets shop. Stomach grumbling, however, Lorenzo went home and quietly tucked the watch chain into his sleeping uncle’s tattered vest pocket. “Foolish boy, let your Uncle Matteo sleep,” croaked Baba Tezia from her corner. “Stop wasting your days sailing newspaper boats in the gutters and start collecting leeches to sell at the market.”

4. This exquisite pocket watch from America

“Everyone, come and look, it is a miracle!” Uncle Matteo shouted one morning upon discovering the stolen pocket watch his nephew had secretly bestowed on him the night before. “It is a genuine American watch!” Fevered and teetering with excitement, however, Uncle Matteo suddenly collapsed to his mat in a violent, phlegmy coughing fit—an ailment he’s carried since boyhood, when a witch put a charm on his lungs. “I know it is you who is stealing these things,” whispered Baba Tezia over Matteo’s gasps, scowling at Lorenzo as she took a long pull on a cigarette. “You are a crook just like your poppa, and one day you will join him in prison.”

Just hours after scolding Lorenzo for stealing, Baba Tezia was electrocuted to death while trying to strip copper wire from the church’s Pentecost light display to sell to Yegor the scrapper. The following morning, Uncle Matteo awoke with a heavy heart. “O, foolish Tezia! Even I, a simple man, know that God brings lightning upon those who steal copper from the Virgin Mother. Who will catch us birds for money now?” It was then that he caught a glimpse of himself in the shard of mirror, sporting the resplendent tiara Lorenzo had stolen for him early that morning. “What’s this?” he whispered. “A crown? Lorenzo, come quick and see what the river gnome has brought me!” He then sprung from bed with youthful vigor and tottered outside to flaunt his crown for all the town to see. Yet he would later regret publicizing his newfound wealth, as while he was out someone forced their way into the shack and stole all of the other jewelry he had previously accumulated.

Upon discovering that all of his marvelous jewelry had been stolen, Uncle Matteo’s spirit was crushed. Saying nothing, he draped a rag over his face, laid back on his mat, and tried to will himself to die. Exhausted from his tears, Matteo fell asleep, allowing sweet Lorenzo to gently pin one last stolen brooch to his heartbroken, sleeping uncle. Remembering Baba Tezia’s awful death, however, Lorenzo suddenly knew what he must do: He would collect leeches to sell at the market and try to live more honestly.

Unfortunately, just as he walked out the door, Lorenzo was ambushed by the constable who had finally caught his thief. “I am King Matteo,” Matteo muttered in his sleep as his nephew was carted off to jail, screaming and hollering just outside his window. “And this is my queen, Lavinia.” Suddenly, a gray bird—much like the birds Baba Tezia used to catch—wandered into the shack through the still-open door and snatched the brooch off of Uncle Matteo’s chest with her beak, only to fly away and place it in a nest constructed out of twigs, trash, and the four pieces of jewelry Uncle Matteo had lost the day before.

Uncle Matteo would later eat the bird out of starvation!