6 Of History’s Most Notorious Serial Killers And Tony Bennett 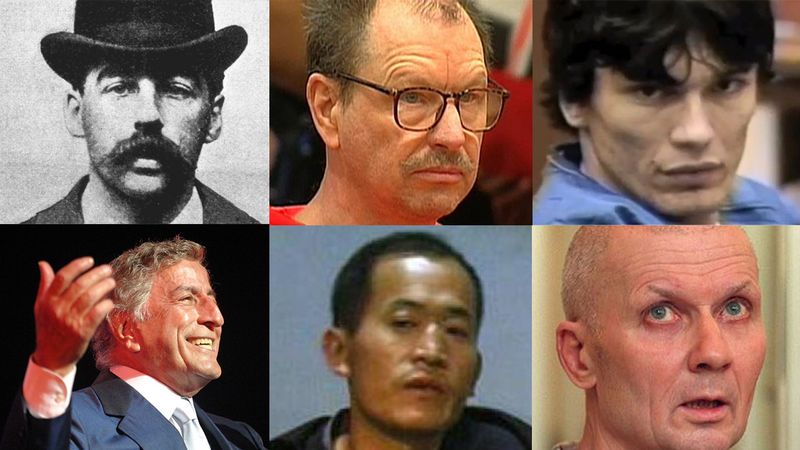 Here are six of the most infamous murderers of all time, and also Grammy Award-winning pop singer Tony Bennett.

Dubbed the “Green River Killer” based on the location where several of his victims’ bodies were found, Ridgway is one of the most prolific murderers in American history, preying mostly on runaways and alleged prostitutes. He is currently serving a life sentence without possibility of parole.

A laborer and former schoolteacher, the so-called Red Ripper murdered more than 50 women and children in the Soviet Union from the 1970s to the early 1990s, usually by stabbing or strangulation. He was executed in 1994.

Before he was subdued by a group of civilians who recognized his mugshot from the newspaper, Richard “Night Stalker” Ramirez terrorized Los Angeles and San Francisco with a series of brutal home invasion-style murders.

A legendary pop and jazz singer, 17-time Grammy winner, and World War II veteran, Tony Bennett has sold over 50 million records and has enjoyed success as a performer across more than six decades.

The 16th-century Hungarian countess was tried and convicted for the murder of dozens of young girls, though some of the legends surrounding her crimes, such as that she bathed in her victims’ blood to gain eternal youth, are likely false.

Holmes is believed to have murdered anywhere from nine to 200 people in the late 1800s, mostly by luring victims to his World’s Fair Hotel, a building he specifically designed to be full of dead ends, false doors, and gas chambers.

The most prolific serial killer in Chinese history, Yang committed more than 60 murders between 1999 and 2003.