6 Of The Most Memorable Presidential Debate Performances Of All Time 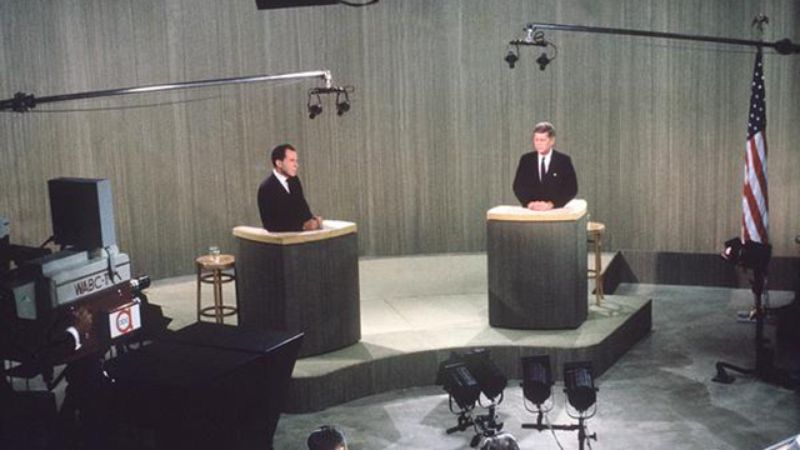 Most presidential debates are brushed into the dustbin of history. But these six were put on the highest shelf in history’s den.

Rather than asking a question to begin the debate, moderator Barbara Walters deviated from the traditional format and kicked off the night by releasing a trap door beneath each opponent. While Reagan was then widely considered too old to be president, he showed his brute strength by quickly extending his arms and legs outwards and catching himself before he plunged beneath the stage. Mondale, however, was not so lucky, and disappeared beneath the floorboards, only to have his desperate wails heard on televisions around the nation.

The first televised presidential debate—and perhaps the most famous of them all—carved its place in the history books the moment Nixon and JFK walked on stage, did two thirds of the Charlie’s Angels pose together, and then walked offstage to fall asleep in the same bathroom stall.

Both Gore and Bush preferred to debate in private without the pressure of millions of people watching, so the event was held on a canoe in the middle of Lake Huron. All that anyone knows about what happened during this lake debate stems from the sight of Al Gore shaking his head while rowing ashore with both oars, while George W. Bush repeatedly clapped his hands above his head in the front seat of the canoe to indicate a win for the Republican candidate.

Democratic candidate Michael Dukakis dropped the ball during his debate against George Bush Sr. by hanging his tongue down to hide that fact that he’d forgotten to wear a tie. Unable to answer any questions without revealing his lack of a tie and appearing unprepared, Dukakis answered every question and rebuttal by nodding his head “yes” or “no” or using unclear hand gestures to elaborate on his policies, handing Bush Sr. an easy win.

The current president and former secretary of state’s political relationship had a rocky start, as made evident by their attacks on Wolf Blitzer during the 2008 presidential primary debates. As Clinton began insisting Wolf Blitzer possessed the charisma of a slack-jawed grouper, Obama hit back by doubling down on his claim that Wolf Blitzer seemed more like the human equivalent of a roll of toilet paper that’s been left out in the rain. Clinton, the great debater she is, delivered a stunning retort by having every woman in the audience line up to take turns telling Wolf Blitzer they wouldn’t be surprised if his penis were literally a baby sock filled with dead ants. Many thought she’d gained the upper hand, until Obama brought Wolf Blitzer’s wife to the stage to announce that she was leaving Wolf Blitzer for a mute eunuch named Grengboo because “it would be pretty much the same thing as staying married to Wolf Blitzer, but the kids would have a much better father figure.” The two would later find enough common ground on the issue to work together as president and secretary of state.

Looking to show his strength early on in the night, John Kerry interrupted during the first question and asked moderator Jim Lehrer to kill him. When Lehrer protested, arguing that he didn’t have a weapon, Kerry threw him a loaded gun and directed him to shoot him in the chest. While Lehrer ended up shooting the gun into the ceiling after pointing it at Kerry for an excruciating 15 seconds, Americans will no doubt remember it as one of the best debate performances of all time.