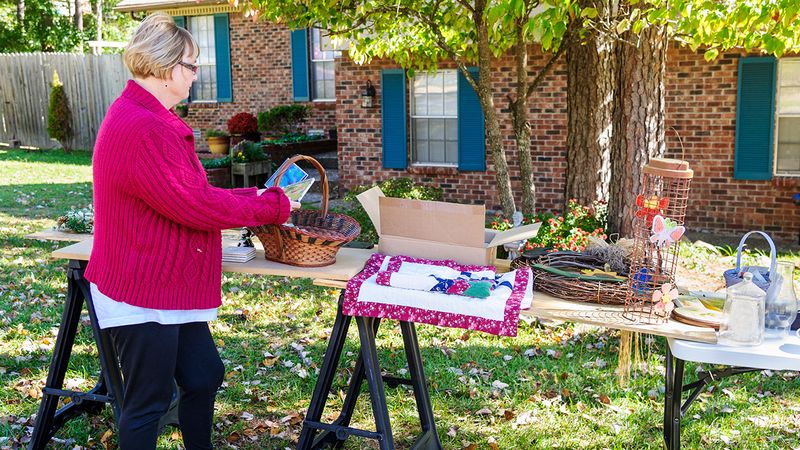 I had a garage sale today, and a number of people came and bought stuff. Most of them left. Here are the ones who are still sticking around.

1. The Guy Who Bought My Lamp

I expected the guy who bought my lamp to leave after he bought my lamp. But he did not leave. He sat down on my lawn and started reading the newspaper. I went up to him and asked him if he needed help with anything, and he said, “Nope. Been saving my appetite all day.” I didn’t really know what that meant, but someone had a question about my foosball table at that moment so I didn’t have time to get clarification on that.

2. The Couple Who Didn’t Buy Anything But Spent A Lot Of Time Browsing My Box Of National Geographics And Then Got In Their Car And Took A Nap

These people seemed really into my National Geographics, so I was pretty surprised when they decided not to buy them. I was also surprised when, instead of leaving, they just got in their car and started napping. They’re still asleep, and there’s a little Post-it on their window that says, “Wake us up when it’s ready.”

3. The Old Woman Who Bought My Vacuum

When the old lady who bought my vacuum offered to pay for my vacuum by vacuuming my house, I thought it was a little odd but also kind of nice. My place is a little dusty these days, and definitely could use a good vacuuming. So I said yes. I wish that she had left after she finished vacuuming my house. She is now in the kitchen and has been vacuuming the same corner for the last 20 minutes. Plus, she keeps chiming in on how to make the pasta sauce. I have to admit she did a pretty good job cleaning my house, though. I don’t know how to ask her to leave without sounding rude.

4. The Lady Who Bought A Plate, A Fork, And A Knife

I assumed this woman bought these items for her own home, but it’s been three hours and she is just standing by the front door sneaking peeks at the kitchen through the window. This is becoming stressful.

5. The Kid Who Bought My Toaster Even Though I Told Him It Was Broken And Then Handed Me A List Of His Allergies

When this kid asked me how much I wanted for the toaster, I was up-front about the fact that it was broken. But that didn’t matter to him. He bought the thing for 50 cents and then handed me a list of allergies he had. Now he is sitting out on the lawn along with the guy who bought my lamp, and I think they’re working on a crossword puzzle together. I really don’t think I have enough ingredients to make food for all these people. Also, there are a lot of allergies on this list.

6. The Older Gentleman Who Brought A Raw Steak To My Garage Sale And Then Bought A Coatrack

I don’t know why the old man who bought the coatrack brought a raw steak to my garage sale. After he purchased the coatrack, he placed the raw steak in a dish to marinate, then put it in my garage fridge. I asked him what he was doing, and he said, “Gotta marinate this bad boy for dos horas, compadre. Buon appetito.” He is still here, and his steak is still marinating. Overall, I’d say the garage sale itself was a success because I made about $250. But it ended hours ago and all these people have not left yet, and I don’t know what to do.