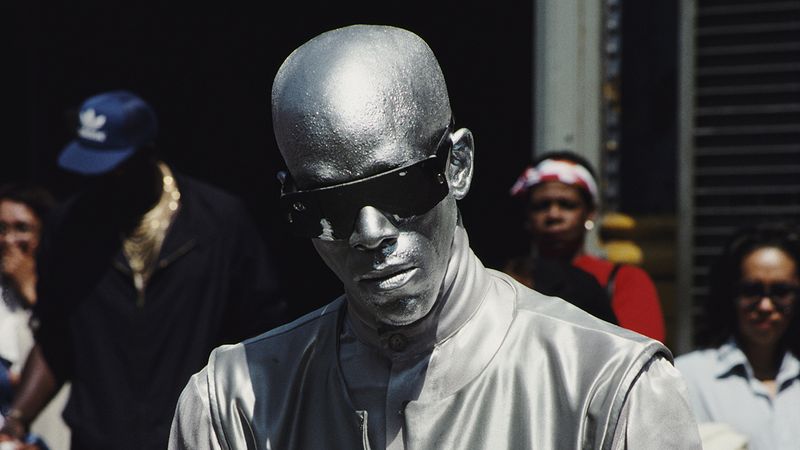 I lost track of my boy. He’s 4-foot-9, has brown hair, and is wearing a shirt with a lizard on it. These robot street performers have not been any help at all.

1. The weather was nice, so I took my son to the boardwalk to walk around and watch the street performers. We were in line to get pretzels when he ran off to chase after a pigeon, and I lost him in the crowd. I looked around the area and couldn’t find him anywhere. So I ran up to one of those robot street-performer guys that I know my son loves to watch and asked him if he had seen a small boy with a lizard shirt on. The guy turned to me and just started robotically dancing to “Funkytown.” No matter how much I implored him to stop dancing to “Funkytown” and tell me if he’d seen my son, he refused to break character for even a goddamn second. This was extremely upsetting to me, but I didn’t have time to dwell on it. I ran off in search of my son.

2. The next robot street performer I asked about my son was doing the thing where they pretend to be in “off mode” and wouldn’t even look me in the eye as I begged him to help me find my little boy. But I was really starting to worry about my son, so I played along and threw a dollar in his tip bucket hoping that would make him “turn on.” But that didn’t make him turn on. So I threw $5 in his bucket, and that didn’t make him turn on either. Finally, I put a $20 in the bucket, and he whirred to life, blowing on his weird, whirling whistle thing. But he still wouldn’t tell me if he had seen my son. He just kept blowing on that stupid fucking whistle of his. That’s all he did. Whistle and whistle and whistle.

3. At this point it had been 10 minutes or so since I lost track of my son, so I was officially in panic mode. I went up to yet another one of the boardwalk’s many robot street performers and asked him if he had seen my son. I even took out a picture of him to show the guy. He looked at the picture and studied it for a moment, and I’m elated because, unlike the other ones, he actually seemed like he might help me. But then he took the picture of my son, put it in his mouth, and pretended to robotically print it out of his mouth like a ticket or something. So I grabbed the picture and started to walk away when the son of a bitch took me by the hand and offered me a metallic rose. This piece of shit was incorporating me into his whole goddamn act. And by the way, the crowd was loving it. They were eating it up. So I threw his stupid metallic rose on the ground and asked him again if he’d seen my son. And he just started doing a robotic version of the beating-heart thing that mimes do. By then I was just crying because I was so worried about my son, and the motherfucker offered me a metallic handkerchief. A metallic fucking handkerchief. I swear to God.

4. When I went up to this robot street performer, he was smoking a cigarette and looking at his phone, clearly on a break. Finally, I thought. This man will help me find my son. But when I asked him if he had seen my boy, he actually went back into character and started smoking his cigarette all robotically. What a nightmare.

5. I really could’ve used some comfort and assistance when I approached this robot street performer and asked him if he had seen my son. Instead, I got a dance battle between him, one of those tree guys, and a couple of statue men. All of them refused to acknowledge me, including the statue men who honestly shouldn’t have even been dancing because their whole thing is supposed to be that they’re statues. But they did dance. And they were really good. The whole group was really good at dancing. And they wouldn’t stop for a second to help a distraught mother find her child. Disgusting.

6. As soon as I asked this robot performer if he had seen my son anywhere, he pointed his robot finger at a little boy in the front row. I told him that was not my son and described him to the guy. The guy then pointed at the boy again. Again, I told him this was not my child. He then started robot dancing around the boy, pointing to him over and over and over again. The boy was loving the attention, but I was infuriated. Fed up with the robot street performers, I turned to the little boy and asked him if he had seen a little boy about his age running around here on his own. The little boy looked up at me, considering the question. Then one of these robot street-performer fucking shitwads showed up with a boombox blasting “Funkytown,” and suddenly everyone was dancing to “Funkytown,” including this little boy. That’s when I gave up hope of finding out if any of the robot street performers had seen my son. Daniel, if you’re reading this, I’m by the bike rental. Please come find me.