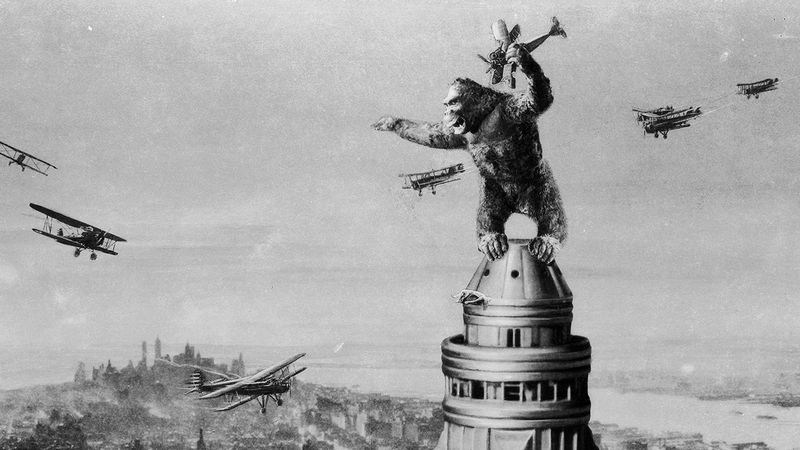 There’s an undeniable nobility to King Kong, in whose mighty breast beats a hero’s heart. But if he were real, and if he were a true champion of the little guy, what might have gone differently this year?

1. The Flint water crisis: A real, live, conscientious King Kong would have shaken the heavens and torn up the Earth to bring clean drinking water to the people of Flint, MI. What would be a significant public works project for mankind would be child’s play for Skull Island’s favorite son, who could rip Flint’s dangerously corroded pipes out of the ground as easily as pulling carrots and carve up furrows to funnel safe drinking water from Detroit. Unfortunately, as King Kong is only in movies, Flint’s crisis continues.

2. The Dakota Access pipeline protests: With a flesh-and-blood King Kong on their side, the Sioux would have had nothing to fear. There’s no way in hell that Morton County law enforcement would have committed such callous brutality against the Standing Rock protestors once they caught sight of the mighty Kong towering alongside the Sioux water protectors. And if they’d tried, King Kong’s immense hide would have shielded the protestors from water cannons, rubber bullets, pepper spray, and concussion grenades, though in keeping with the spirit of peaceful protest, he’d never retaliate, except maybe to toss a few squad cars around.

3. The prison labor strike: You might not know that this year saw the largest prison labor strike in history, with 20,000 prisoners striking across 29 prisons for improved pay and conditions, because barely any major media outlet covered the story. But if King Kong existed outside the silver screen and caught wind of what was happening, you’d better believe that populist colossus would’ve come thundering up a guard tower to tear some prison factory to scrap with his mighty, meaty fists, literally striking a blow against the prison-industrial complex. And he’d be bringing every news ’copter in a tristate area in tow, to boot!

4. The Stanford rape case: In a victory for women everywhere, King Kong would have descended like a thunder cloud and scooped up Brock Turner on the day he was released after serving half of his six-month prison sentence for raping an unconscious woman. Then the socially aware monstrosity would have hurled him into the Pacific Ocean with a roar to shake the throne of God himself. It’s harsh, but when the legal system fails us, King Kong would be there to deliver swift and uncompromising justice.

5. Chelsea Manning: What prison wall could stop a 50-foot-tall, totally real ape with righteous fury in his heart? Chelsea Manning’s imprisonment for defending the civil rights of all citizens is an ongoing stain on America’s conscience, but with Kong in her corner, she’d surely have already been freed from solitary confinement by a hairy-knuckled fist through the ceiling and spirited away to safety. In the event King Kong ever becomes real and for whatever reason has an unshakeable sense of right and wrong and also a sustained interest in human intrigue, Chelsea Manning has absolutely nothing to fear.

6. He would have definitely climbed Trump Tower: If King Kong were real, there’s just no way this year would have closed out before he’d beat his chest at the top of a Trump-branded building, showing Americans everywhere what a true champion of the downtrodden looks like. And while King Kong would hopefully respect democratic norms too much to directly interfere with the electoral process, maybe he’d have carried a wailing Donald Trump up there to frighten him into feeling some accountability for those who’ve placed their hopes in him, and those threatened by his rise. If the omnipresent threat of King Kong couldn’t keep Trump honest, nothing will.