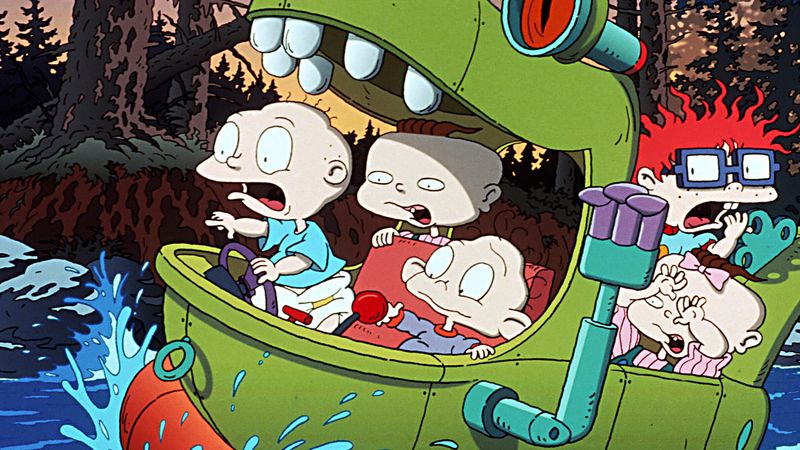 Things could have gone south for the babies, but I got on my knees and appealed to our Lord.

I was on my knees right from the beginning of this episode after Chuckie swallowed that watermelon seed. I knew no good could come of it, and once the babies shrunk down and went inside Chuckie in search of the seed, it was destined that I would have to beg God to spare their lives. Of course, wouldn’t you know it, the seed eventually started to turn into a watermelon as the babies were still inside Chuckie, but thanks to my prayers and the grace of God, the whole ordeal ended up being just a dream, and the babies lived to see another day.

The babies were in danger of not having a happy Chanukah due to the rivalry between Grandpa Boris and his childhood friend Shlomo, and I couldn’t let that happen. I prayed so hard that I got a headache and chapped hands. I even started crying when Boris and Shlomo put their fighting aside to come together and sing at the end of the episode, so overjoyed was I that my prayers had saved their Chanukah.

My prayers could not save Chuckie’s mom, but at least they were able to save Chuckie from the evils of capitalism.

The babies had wandered onto the ice of “Reptar On Ice,” and once more, I felt I had no choice but to cry out to God for help. Sure, it’s possible they could have used their low center of gravity to stay upright, but falling the wrong way on the ice could have permanently harmed them—and I wouldn’t have been able to live with myself if that happened. The parents had fallen asleep, but thankfully, my prayers made God wake them up to snag the babies, saving them from potential disaster.

5. Rugrats In Paris: The Movie

This was hyped as the biggest adventure of the babies’ lives, but I figured that all it meant for me was 77 minutes of prayer. I was right. They were able to get out of Paris unscathed thanks to my pleas to God, but boy, was it close. When they got kidnapped, I thought that God had turned His back on the babies, and I momentarily lost my faith. But then I realized He was testing me, so I began to pray harder than I ever had before. It worked, and apparently, I prayed so hard that God felt compelled to give Chuckie a new mom. None of my fellow moviegoers knew what I did, of course, but that’s okay. As long as the babies are safe, I don’t care about anything else.

Football should not be played by babies, plain and simple. From the opening title card of this episode to the closing credits, I prayed the entire time, no breaks. As soon as it ended and I knew the babies were safe, I dialed 911 and collapsed on the floor. I was hospitalized for severe dehydration, but it was worth it. The babies were okay. And therefore, so was I.

Those are the six times I saved the babies, but before you go on with the rest of your day, I ask you to please join me in a brief prayer: