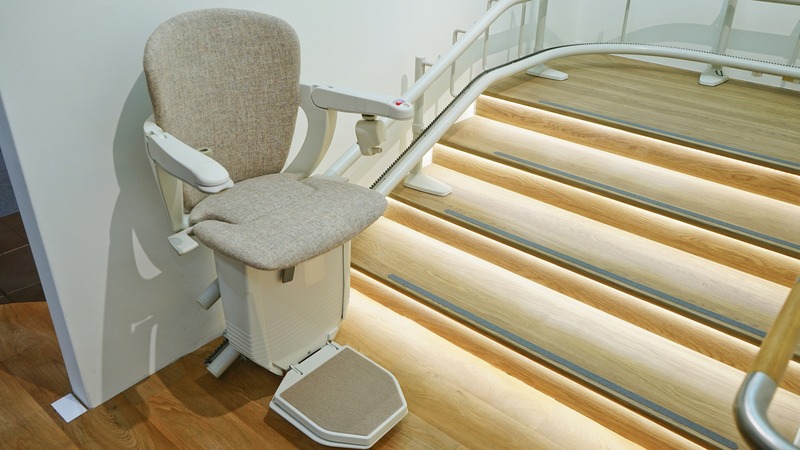 My nana’s got a stair lift in her house because she’s old as fuck and her bones are all crackly and frail. She’s also super twisted and loves wild shit. Here’s a bunch of ways me and the boys messed around with her stair lift ranked by how sick my nana thought it was.

6. Cranking up the stair lift speed to the fastest setting and lettin’ ’er rip: We thought this was gonna be more badass than it was, but it turns out these stair lift things don’t go that fast. It was pretty embarrassing honestly. My nana didn’t think this one was cool at all, and she booed us for a little while and then took a nap in her big chair.

5. Putting a surfboard on the chair and getting Rich, Blake, and Troy up on there at the same time: I knew we were onto something here because as soon as we got the surfboard out, my nana started saying, “There you go! Now, there you go! All right, now we got something going!” Then when Troy fell off and busted his ass on the stairs, she started howling like a wolf. My nana thinks it’s super funny when people bust their ass or get hit in the balls or whatever. She’s on YouTube all the time watching shit like that. Every time I come over to her house she shows me a bunch of them on her computer. That’s her sense of humor. The surfboard trick is still ranked pretty low because Nana thought it was only a little bit sick, but she still liked watching it.

4. Lining the stair lift with firecrackers: Blake had the genius idea to put some fireworks at different points on the stair lift so they would explode when the stair lift went past ’em. It was sick as hell and almost practically lit the house on fire, but nana completely missed it because she fell asleep in her big chair. Just part of being old as fuck, I guess. Anyways, we woke her up and told her about it and she agreed it sounded pretty sick. Wish she’d seen it, but oh well.

3. Tying Xander’s legs to the stair lift chair and seeing if it could drag him all the way up the stairs: Soon as the stair lift started to drag Xander up the stairs, my nana started pounding the kitchen table and screaming, “Faster!” So we made it go faster and—okay, this is fucking hilarious—it started to pull Xander’s pants down a little so you could see his ass crack and my nana just busted out laughing and started screaming that she was gonna piss herself. Luckily she didn’t piss herself. But she said she was almost gonna and we thought she might because sometimes you piss yourself when you’re old as fuck and howling at some dope-ass shit like Xander getting his pants pulled down by the stair lift. I’m glad she didn’t piss herself that time, though. That would’ve been so weird. Anyway, my nana thought this trick was really fucking sick, which is why it’s coming in at number three on the list.

2. Troy going down the stair lift with an air-soft gun and shooting at us the whole way down: For real, though, Troy is such a dick with that air-soft gun. He’s always busting it out and shooting us in the ass and we’ll all have, like, huge welts for, like, a week. I swear, if Troy wasn’t going through such a hard time with his parents getting a divorce and everything, I would completely kick his ass. Goddamn. Anyways, my nana thought it was sick as hell when he came down the stair lift shooting us with his air-soft gun. She was, like, screeching and shit. For real. My nana thinks guns are awesome. She’s always sending me pictures of guns she finds online that people are trying to sell illegally on Facebook and craigslist and shit. She doesn’t even have a gun. She just thinks they’re cool.

1. Stacking all us boys up on top of each other on the stair lift chair and coming down as fast as possible: Okay, this was seriously scary. We could’ve definitely fallen off and died or something. But it paid off because it made my nana go absolutely ape-shit. Soon as she saw us coming down the thing all stacked on top of each other going way too fast, she raised her walker up in the air all triumphantly and started cheering. I haven’t seen her think something was that sick since the time my uncle’s eyeball popped out during touch football at our family reunion one year. I was sure the stair lift was gonna break, but dang, that thing is sturdy as hell. I mean, we were definitely over the weight limit, but somehow it didn’t break. It was sick. When it was over, my nana was just stomping around the house with her walker screaming, “Fuck damn yes!” a bunch of times really loud at nobody in particular. Eventually her old-ass bones got pretty tired out and she had to take a nap in her big chair. I love my nana. She’s the best.