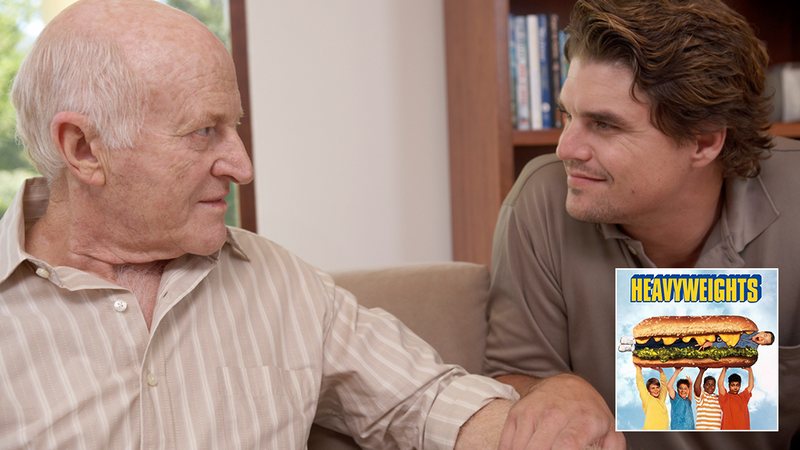 Your dad got caught illegally downloading Heavyweights, and you sold him out before a court of law. Everyone knows how much of a strain that can be on a father-child relationship. Getting through this won’t be easy, but follow the advice below and you’ll be on your way to salvaging that paternal bond.

1. Identify the specific reason you haven’t been getting along: By confirming that the problem indeed stems from you pointing at your dad and telling the judge you personally saw him illegally download Heavyweights from an unauthorized source, even though he’d just sworn under oath that he didn’t, you’ll have a clearer idea of how to resolve the issues between you two.

2. Take him out for a steak: Nothing says, “Dad, I appreciate you,” and “Dad, I’m sorry for telling the judge that you downloaded Heavyweights from The Pirate Bay, even though it’s true,” than taking your dad out for a nice, juicy porterhouse at his favorite steak house. After all, the $250,000 fine you helped the Disney lawyers slam him with totally cleaned out his retirement savings and then some, so he probably won’t be going out for a fancy dinner like this for a while.

3. Offer to let him spank you: This could be just the release he needs to get your relationship on the mend.

4. Tell him you love him: Better yet, get it on the record in court just before the prosecutor finishes questioning you. Something like, “Yes, your honor, my father did illegally download Heavyweights, and I love him.” As they say, a spoonful of sugar helps the medicine goes down, and this might be perfect for softening the blow of you selling him out.

5. Ask him if he needs any help around the house: Look, nothing is going to undo you standing up in court well before it was even your turn to testify, pointing at your father, and saying, “There’s your man, your honor. The one who purloined a 360p version of Heavyweights: my own father.” It will be a lengthy healing process, but lending a hand with chores and house projects is a great way to show your dad that you’re still dependable and ready to earn his trust back.

6. Buy him a Heavyweights DVD so this never happens again: This is a simple, effective gesture that’ll ensure you won’t have to toss him to the wolves for pirating Heavyweights anymore. Just make sure you avoid saying something like, “Don’t worry, I bought this copy from Target, so it’s legal,” in an attempt for a little levity. Your betrayal at the courthouse is still way too fresh.