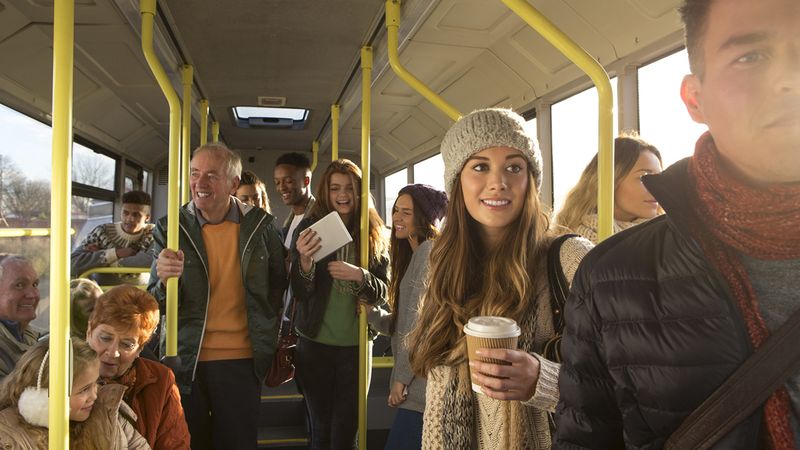 I used to bring my own folding chair on the bus, but now I don’t, and I owe it all to the good-hearted people who reassured me that it was okay not to bring a chair.

1. “Yes, it’s free to use the chairs.”: It costs $2.75 to ride the bus, which isn’t a lot of money to some people, but it’s a lot of money to me because I recently lost my job. I had assumed there was a second fee to sit in bus chairs, which would be an added expense I simply can’t afford. I was resigned to lugging my own chair onboard for every ride until the bus driver assured me that using the chairs was included with standard bus fare.

2. “Rosa Parks is dead.”: I know very little about Rosa Parks, because I dropped out of high school to work in my uncle’s candle factory. I don’t remember if Rosa Parks was a good guy or a bad guy, but I do remember that she was famous for stealing someone’s seat on a bus, and I was scared that she would do it to me. One of the reasons I brought my own chair was that I believed that Rosa Parks couldn’t take a chair that was my legal property. It was a huge relief when the other passengers told me that Rosa Parks died a while ago.

3. “Sit however you want.”: My uncle’s candle factory burned down when I tested out a new candle, and I ended up severely burning the top of my buttocks. Although I’ve mostly healed now, I prefer not to place too much pressure on the scar tissue, so I sit in a way such that only the lower half of my bottom ever touches the chair. This requires me to lean all the way forward on the edge of the seat, and I wasn’t sure if that was okay to do on the bus chairs. Then, the bus driver explained that I could sit however makes me comfortable. I am so thankful and grateful to this bus driver for patiently explaining all the bus policies to me. When it comes to sitting on the bus, he has been my rock.

4. “Nobody will steal your chair if you leave it in my grocery store.”: The main reason I ride the bus is to go to the grocery store, which is five blocks from my house. Five blocks isn’t very far for some people, but it hurts me to walk that much because my upper buttocks were burned in a fire. It takes me several hours to shop for milk, so I would always bring my folding chair to sit down and rest when I get tired. The kind owner of the grocery store said that he would keep my chair for me in the back room where it wouldn’t get stolen, so now I don’t have to bring it on the bus with me each time I go shopping for milk.

5. “Don’t listen to Joel.”: Joel is a bus regular who sits on the left side near the back. Ever since I asked the bus driver about the price of seats, Joel has heckled me with wildly contradictory advice, saying things like, “Sitting is 20 bucks; pay up,” “Rosa Parks is alive and she’s my goddamn daughter,” and “Joel’s gonna steal your chair.” It was when the bus driver told me not to listen to Joel that I gained the confidence to see how many of Joel’s arguments were in bad faith and even intentionally misleading.

6. “You don’t have to throw your chair into the street to make me stop the bus.”: The bus driver explained that he pulls over whenever he sees someone at the bus stop, and that I don’t have to hurl my chair in front of the bus to make it brake. Life is much better now that I don’t have to throw my chair into the street, because that was a strenuous physical activity that was very difficult for me due to my candle-related injuries. The bus driver is a saint for telling me all this, and I hope they pay him well.