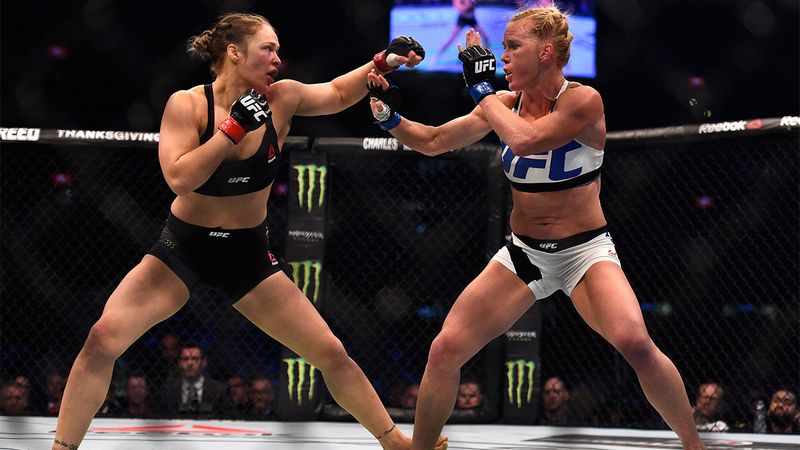 I swear to God, I better not catch them doing anything funny.

I spent three full days setting up all the intricacies of my Nativity scene, so if I saw Ronda Rousey defiling any of my figurines with her powerful limbs, you know I’ll flip. Look, this kickass UFC Bantamweight Champion might have been the first person to bring female MMA to the masses, but that wouldn’t give her the right to put my baby Jesus in a chokehold.

Of course, we all know Holly “The Preacher’s Daughter” Holm is a badass fighter who constantly breaks down gender stereotypes both in and out of the ring, but should I find her crushing each of the Three Wise Men between her two gargantuan legs, the cops will be here in a second. Not only would it be rude, but it would be a non-regulation move, which I will not accept on my property.

If UFC powerhouse Miesha Tate came over and popped the heads off my lambs with any part of her body, I would question her faith as well as mine.

As someone who is not just an MMA fighter, but a female MMA fighter, Amanda Nunes knows exactly how important it is to be an amazing role model for thousands of young girls. So with that, I ask you: Should young girls come over and hold Joseph and Mary between their thighs until they explode into a million pieces? Should women of any age kick a foot straight through the crib of baby Jesus? The answer is no. You’ve been warned, Amanda.

Another UFC champion, another strong woman I’d sue if she so much as touched the angel with her glutes.

Okay, Gina may be retired, but that wouldn’t make a property destruction situation with her feel any less insulting. Not only was she the first woman to headline an MMA event, but I actually went to many of her matches when she competed in Strikeforce and EliteXC! Still, though, she better not jump off my roof legs-first and smash into my Nativity scene. I’d probably cry.

The following is a personal message for Sarah: Sarah, MMA is a sport with very strict rules and regulations, and if you someday disregard those and use my plastic figurines as muscle rollers for your quads, well, you deserve to get hit by whatever I throw at you from my porch. Frankly, no matter how badass you are, you may not touch this Nativity scene, or even put a single foot on its hay. Do you hear me, Sarah? You have your ring, and I have mine.