7 Celebrities Tell Us Their Favorite Memories Of Johnny Carson 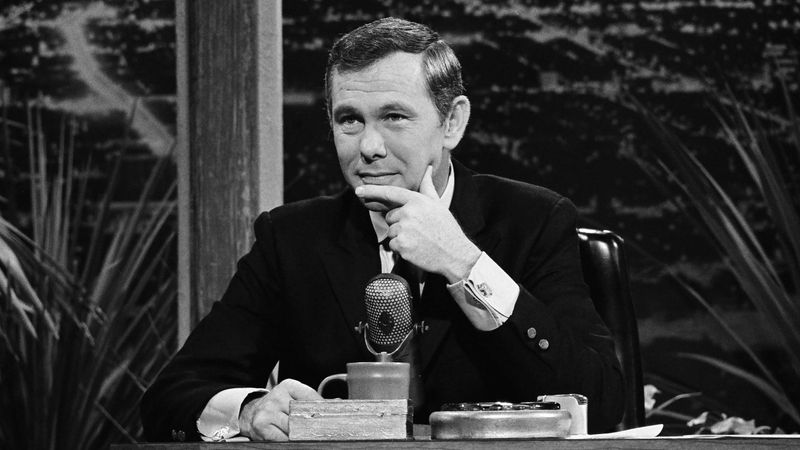 The late, great “Tonight Show” host was a symbol of class, style, and poise. Here, seven celebrities who knew Johnny share their favorite memories of the comedy legend.

“One time, I did a set on The Tonight Show, and Carson called me over to the chair. I was honored, and I thought he was going to interview me, but instead he leaned in close and whispered in my ear, ‘I can’t escape the desk. Every night, I go to sleep in my bed but wake up behind the desk. Last night, I woke up in the middle of the woods, sitting behind my desk. What the hell was my desk doing in the woods?’ Then he sent me backstage and didn’t talk to me for the rest of the night.”

“I once walked into Johnny’s dressing room by mistake, and he was throwing entire apples into the air and swallowing them whole. I asked him if he knew how to eat apples, and he spat up an apple core, hitting me right between the eyes.”

“I was at a party one night, and Carson was there telling a lot of non-racist jokes. I said to Carson, ‘Johnny, those jokes are pretty non-racist!’ and Carson says to me, ‘Tom, do not ever tell me things that I already know, or I will climb into your wife’s car and use it to run over your brain.’ I love that story because it shows just how angry and non-racist Johnny was. Johnny Carson was the angriest, least racist person I’ve ever known.”

“Before I met Johnny, I was just a no-name boxer fighting amateur bouts for supper money. Then he invited me on his show and let me punch a mule into a coma for all of America to see. And just minutes after the show aired, I was offered my first professional contract.”

“One memory stands out above them all. It was after I performed stand-up on his show, and he looked at me and said, ‘Jerry Seinfeld, come on over here come on over to my couch to my couch to my couch look you are to sit and do not lay! You are to sit up straight and answer me and look into these late night eyes for I am nothing more than the big beast of California nighttime and you are a prawn and a shrimp and a krill and nothing more than my food to me as I am the midnight whale of Burbank who uses you to glow and also you should place your upright self upon the disgusting cushions of my plush prison at this current moment in time!’ It was the best moment of my life.”

“I was on Carson toward the tail end of his career. He was really coasting on his reputation at that point, and wore dark sunglasses and drank bubble-blowing liquid from a martini glass the entire show. He heckled me in fluent Farsi throughout my set, then just played the flute like an imbecile when he called me over to his desk for an interview. I saw that he had a waffle maker behind his desk, and when he saw me looking, he tried to throw acid in my face. I owe everything to Johnny.”