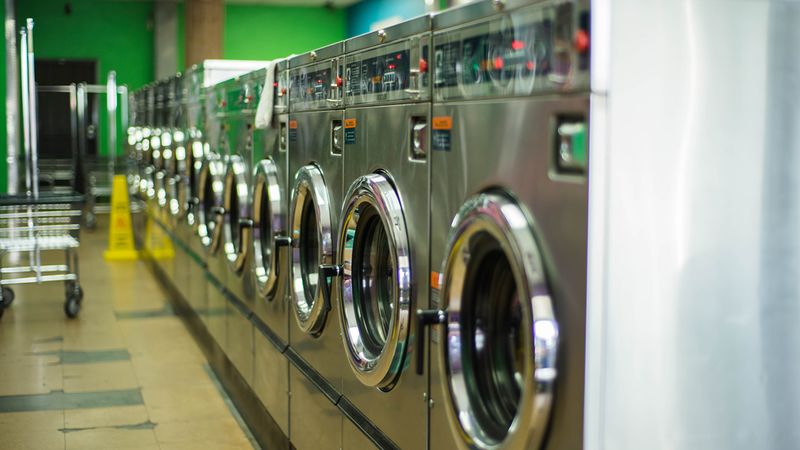 I’ve got a real propensity for getting pictures of myself displayed behind the counters of laundromats. Here are all of them, ranked from best to worst.

I’m a hero to this laundromat. One day while I was there, a customer was giving the owner a hard time, saying things like, “Give me one good reason why I shouldn’t stick myself in the washing machine.” Obviously, this was just no good. I decided to put a bunch of my laundry quarters into a sock, and I hit the man over the head, knocking him out cold. The owner loved that I made this happen, and now whenever I go back to Highland Cleaners, I am received with a hero’s welcome—not to mention a 30 percent discount.

For a while, Southport Suds was holding a challenge: If you could eat 10 spicy Buffalo wings while waiting for your clothes to dry, you’d get your picture displayed behind the counter in enormous fashion. It was tough, but I was able to pull it off with a few seconds to spare. I ended up being the only one to ever successfully complete the Southport Suds Buffalo Wings Challenge, and I will likely be the only one to do this forever, as the Health Department has since shut the challenge down. But the picture of my victorious, sauce-covered face still remains on the wall, which, to me, is a very good thing.

My picture being displayed at Cortland Cleaners is by sheer accident. The owners sponsor a Little League baseball team and put up the team’s photo behind the counter as proof of their ties to the local community. I have no involvement with this particular Little League baseball team, but I’m still featured in their team photo nonetheless. This is because I happened to be walking by as the photo was being taken, and I was curious as to what was going on. I sat cross-legged in the front row, asked a kid, “What is all this about?” and when he said, “Baseball,” I got up and went along with my day. But I didn’t get up before the flash went off, so now I am forever immortalized in the photo.

It’s entirely unclear whether it’s good or bad that my picture is displayed prominently behind the counter of the First Avenue Laundromat. One day, I was washing my clothes when the owner snapped my picture, and when I asked him why, he wouldn’t answer directly, only muttering, “You’re going on the wall.” Now, a very small picture of me is up behind the counter, and he still refuses to tell me the reason.

This is where the tide starts to turn, in terms of how bad it is that my picture is behind the counters of laundromats. Simply put, I poured a gallon of milk into one of the washing machines at Elmhurst Cleaners. I had heard a rumor that milk cleaned clothes, and the rumor was wrong. At best, I have learned that milk destroys washing machines. Now I’m no longer allowed to bring milk into Elmhurst Cleaners, and my picture, complete with the words “Absolutely No Milk” on the bottom, is now placed behind the counter to remind employees of my misdeed.

Behind the counter of Belmont Coin Laundry is a huge picture of me trapped underneath the dryer. I really wish this wasn’t the case. I had reached under the dryer to grab a quarter I had dropped, and in the process, somehow managed to have the dryer fall on top of me. It was a bad scene, and I broke my wrist. Another, more recent time at this laundromat, I met a new friend while doing my laundry (we bonded over our love of movies and television), but once he saw the huge picture of me trapped under the dryer with a broken wrist, he fell silent and walked out the door, and our friendship stopped. Whenever a picture of yourself causes you to lose a friend, especially a new one, that is bad.

A picture of me is featured behind the counter of the Five Star Laundromat with the words “Dullard Of The Month” written above it in cursive. This has been very, very bad for me. I became their Dullard Of The Month, during what I guess was a slow month for dullards, when I accidentally said “I’m do to here some laundry” instead of “I’m here to do some laundry.” Around here, earning a DOTM from Five Star is basically a scarlet letter, like from the book. Almost immediately, people no longer respected me, local restaurants stopped serving me, and my car got repossessed. I am also in danger of losing my job if I don’t get this fixed by the end of the week, which is a problem, because the month still has three weeks to go. By far, nothing has been worse for me than this.