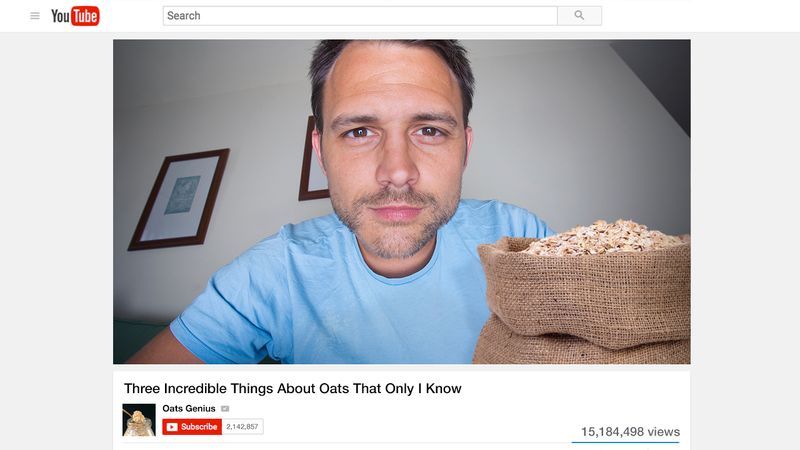 If you’ve used the internet in the past year, you know who The Oats Genius is. It seemed like he would be the king of the internet forever, but his rapid and very public decline showed us that if internet stardom isn’t navigated very carefully, it can end up a disaster. Here are the seven lessons we learned.

1. Internet stardom can happen in a flash: One day he went to bed as Brandon Soren, a 23-year-old retail clerk from Boise, ID. The next morning he woke up as The Oats Genius, the wildly popular oats expert who blew the minds of the entire internet by revealing facts about oats that no one else would dare try. In those heady early days, he could have never guessed how it would all end just a couple of months later.

2. Stick with what you’re known for: For weeks after his first video, Three Incredible Things About Oats That Only I Know, went viral, The Oats Genius kept things pretty oat-related. And while none of his subsequent posts, such as I’ve Cracked The Oats Code and Here’s The Big Secret Oats Don’t Want You To Know ever reached the massive amount of shares the first video did, his following was still growing exponentially every day. It wasn’t until he started straying from the subject of oats that his number of followers began to plummet. He found out the hard way that just because the internet was clamoring for his incredible oat wisdom, didn’t mean it was interested in hearing him play his homemade lute or seeing his pencil-sharpening hacks. The Oats Genius showed us that if you want to maintain your stardom, it’s best to stick to what made you internet-famous in the first place.

3. Don’t let your haters get to you: A major component in the downfall of The Oats Genius was that he let his critics get under his skin. The most glaring example was his reaction to “The Wizard of Oats,” the inevitable Oats Genius parody account. The Oats Genius began to use his platform less and less to share incredible revelations about oats and more and more to attack The Wizard of Oats. The drama and negativity proved to be too much for many fans who were just looking to relax and hear stuff about oats.

4. No matter how big you are online, you still need to take care of the real you: At his peak, The Oats Genius was a guest on Ellen, where he shared an amazing fact about oats that received a standing ovation. But the home life of The Oats Genius was actually quite sad. He wasn’t leaving his bed, was consuming nothing but energy drinks and Tylenol, and his apartment was filthy. He’d quit his job to concentrate on researching oats and was behind on his rent and bills due to investing his life savings into unsold oat merch. Perhaps the biggest irony was that he hadn’t eaten a healthful bowl of oats in months. No matter how things are going for you online, you’ve got to take care of yourself.

5. There’s a right and a wrong way to sell out: There’s nothing wrong with cashing in on internet fame. Just don’t do it the way The Oats Genius did. His videos became so filled with obvious product placement and endorsements that they more resembled cheesy infomercials than the thoroughly entertaining and educational oat lessons that his fans craved. No one can forget the cringeworthy video where The Oats Genius held up a can of Pepsi and said, “My favorite oat fact is that Pepsi is oats.” But The Oats Genius’ biggest mistake? He accepted oats as payment for every endorsement he did and never made a single dime in cash.

7. When you fall, you fall hard: The Oats Genius showed us that internet fame can be exciting, but the reality is it’s going to end some day. And when it does, you’re going to fall hard. One moment The Oats Genius was on the top of the world. The next he was busted falsifying facts about oats; it was discovered he had retweeted an anti-Semitic tweet in 2014; and every agent, TV network, and publisher he’d been in contact with stopped answering his calls. So enjoy your internet stardom while you can, because if you make the same mistakes The Oats Genius did, you’re bound to crash and burn.