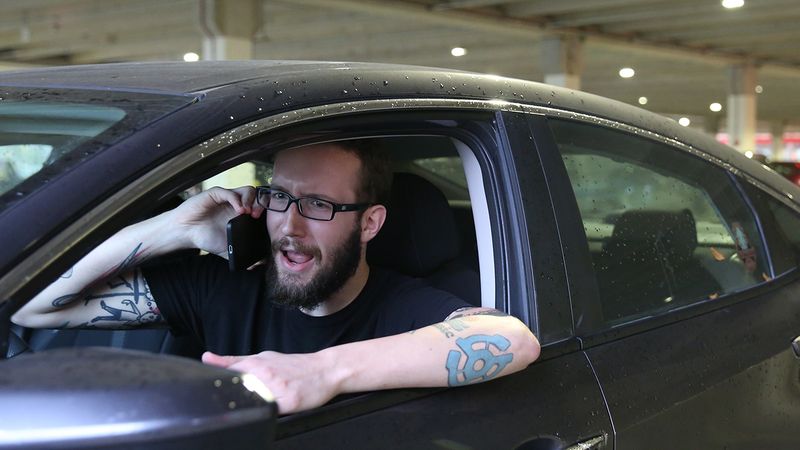 Yup, these folks have earned themselves top spots on this man’s shit list.

1. Frank: Sounds like Frank’s in big trouble with this guy. It’s not totally clear over what, though. Either way, Frank’s apparently thrown him under the bus “for the last time.” The parking garage’s acoustics really amplify this tattoo guy’s declarations of how “Frank’s going to get what’s coming to him.” You can seriously hear how angry he is from the bottom level. Wouldn’t want to be Frank right now.

2. The kid who “knew exactly what he was doing”: Okay, tattoo guy’s barking at the person on the phone to not give him “any bullshit about how the kid didn’t know any better.” That’s pretty much all we know about the kid. Maybe it’s his son? Then again, this guy seems like the type of person who applies the word “kid” to anyone even marginally younger than him, so who knows. Now he’s all worked up and rolling his sleeves back, revealing a previously hidden upper-arm tattoo: barbed wire spelling out the word “VALUES.” Probably a bad move on that kid’s part to fuck this guy over.

3. de Blasio: Assuming New York City Mayor Bill de Blasio is who he referred to when he said, “That shitpig de Blasio’s fucked me time and time again,” the mayor isn’t doing tattoo guy any favors either. It’s even more puzzling because the tattoo guy’s car clearly has Arizona plates.

4. Someone only referred to as a pump mechanic: Apparently a pump mechanic didn’t do a good job, and now it’s tattoo guy’s problem. On top of that, his “own guys sold him out” during the pump mechanic debacle, too. Yikes. That betrayal’s got him royally pissed off. Meanwhile, a car that had been waiting for tattoo guy to move out of the way just honked at him. He’s staring down the driver, an elderly woman with two children in the backseat—oh, boy, now he’s flipping her off and shouting, “Get fucked.” Damn, these people have really put him on edge.

5. A woman named Theresa, who is somehow implicated with the pump mechanic: According to tattoo guy, Theresa hung him out to dry, and he doesn’t want to hear her name ever again. She seems responsible for hiring whatever pump mechanic handed him “a shit platter for [tattoo guy] to clean up.” Theresa’s sister, Rebecca, was apparently the only one who stood by tattoo guy during the ordeal, who’s maybe his wife? Or maybe Theresa’s his wife? The word “wife” got thrown out there at some point before he screamed something or other about loyalty.

6. Tattoo guy’s brother: Oof, not even tattoo guy’s “own fucking brother” had his back after an incident involving… a “wheelchair” and a “dog”? Those were key words in an otherwise unintelligible torrent of anger. A minivan was about to park a few spots over but saw the guy on the phone savagely kick his own bumper and exclaim, “So much for family… fucking snakes,” between drags off a menthol cigarette, so the minivan just kept going and parked on another level.

7. Brody, the person tattoo guy is speaking with on the phone: It’s come to light that the person he’s on the phone with is “Brody,” a “real fair-weather friend” and “a fucking dirtbag” in tattoo guy’s eyes. Whatever Brody said to tattoo guy appeared to be the final straw, because our man just shouted, “Thanks for nothing, Brody, you cock-sucking ingrate,” got into his car, and peeled out of his spot down the garage’s incline. Wow, rough. That guy needs to surround himself with more trustworthy people.