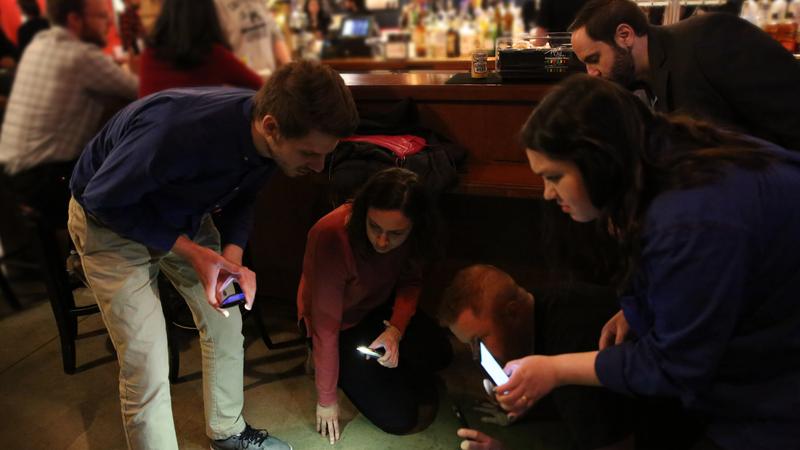 Lindsay thinks she dropped her debit card somewhere, and everyone’s got their cell phone flashlights on to help find it. Here’s the definitive ranking of everyone who’s really just going through the motions with the whole thing.

All right, at spot number seven is Sam, who is definitely bringing the most energy to the search. Rather than standing on the sidelines, Sam is commanding everyone to take out their cell phones now so they can find Lindsay’s debit card before it’s too late. From the second she saw her friend fumbling through her purse, Sam pulled up some insane app that blasted two separate lights from her phone. Even though it’s been 10 minutes and people are slowly losing energy, she’s still shining her flashlight in people’s faces and asking questions like “When was the last time you saw it?” and “Did you ask the bartender if he has it back there?”

Next is Sarah, coming in at number six. When she heard that Lindsay was in trouble, Sarah immediately turned on her phone’s flashlight and started shining it under the table, but when she ultimately didn’t see anything, she definitely started phoning it in a little. Whereas before, Sarah was on her hands and knees, scanning the ground with her phone in a panic, it’s pretty obvious now that she’s just been texting with her phone’s light on for the last few minutes. Sure, every time Lindsay looks over at her, Sarah picks up the pace and starts looking again, but it’s not exactly genuine! Try a little harder, Sarah!

Ah, Lindsay. No one’s saying Lindsay doesn’t want to find her debit card, but she’s definitely less frantic than she should be. Lindsay was using her iPhone flashlight to check out the ATM machine by the bar’s entrance to see if she maybe left it inside, yet after a pretty impassioned first once-over, her energy has dropped considerably. Even though she probably knows the card isn’t in there, she keeps saying she’s not giving up—probably because she knows if she stops looking, the rest of the crew will, too.

4. Older guy in a suit jacket and jeans who must be using the search to hit on Lindsay

Now here’s a guy who’s really putting in the work to pretend like he’s looking for Lindsay’s card! This strange man was posted up near the jukebox alone and must’ve had his eye on the group for a while, because as soon as everyone took out their flashlights, he whipped out his own phone and began scanning it over just the top of jukebox, back and forth, really making it seem like he’s into the search even though he’s not doing shit. The guy has one of those old-ass yellow Sprint phones with the walkie-talkie that doesn’t even have a flashlight, so he’s using the dim-as-hell home screen instead. Not to mention there’s no way this guy has any idea what everyone’s looking for. Hasn’t said a word to anyone. He’s making sure to let out some loud sighs, too, presumably to get onto Lindsay’s radar.

Unfortunately, the drop-off from the suit jacket and jeans man to Andrew is a steep one, because Andrew is both going through the motions and doing a terrible job. First of all, Andrew immediately insisted that he shouldn’t turn on his flashlight because he needs to save battery for a Lyft later on. And then when he did turn it on, he shined it under tables so fast that even if he were trying, he could never actually see anything. Sure, Andrew was about to leave the bar when Lindsay started panicking, but that doesn’t even start to excuse his terrible acting.

Yeesh. Coming in at spot two is Ryan. All this guy did was fiddle with his phone’s flashlight app for two seconds and ask the bartender if Lindsay’s card was back there. Plus, when the bartender said no, Ryan just went ahead and ordered himself another beer since he was already over there. Come on!

And at number one, it’s Lauren, the queen of indifference. When everyone got up to look around the bar, Lauren just pulled out her phone, turned on her flashlight, and lay down on the booth seat where Lindsay was sitting. Since plopping herself down on her stomach, Lauren has just been shining her flashlight at the cushion for the last five minutes, even though it’s the first place everyone looked for Lindsay’s debit card. And when Lindsay came over to check on her? Lauren just said, “Not here, you probably just left it in a cab or something.”