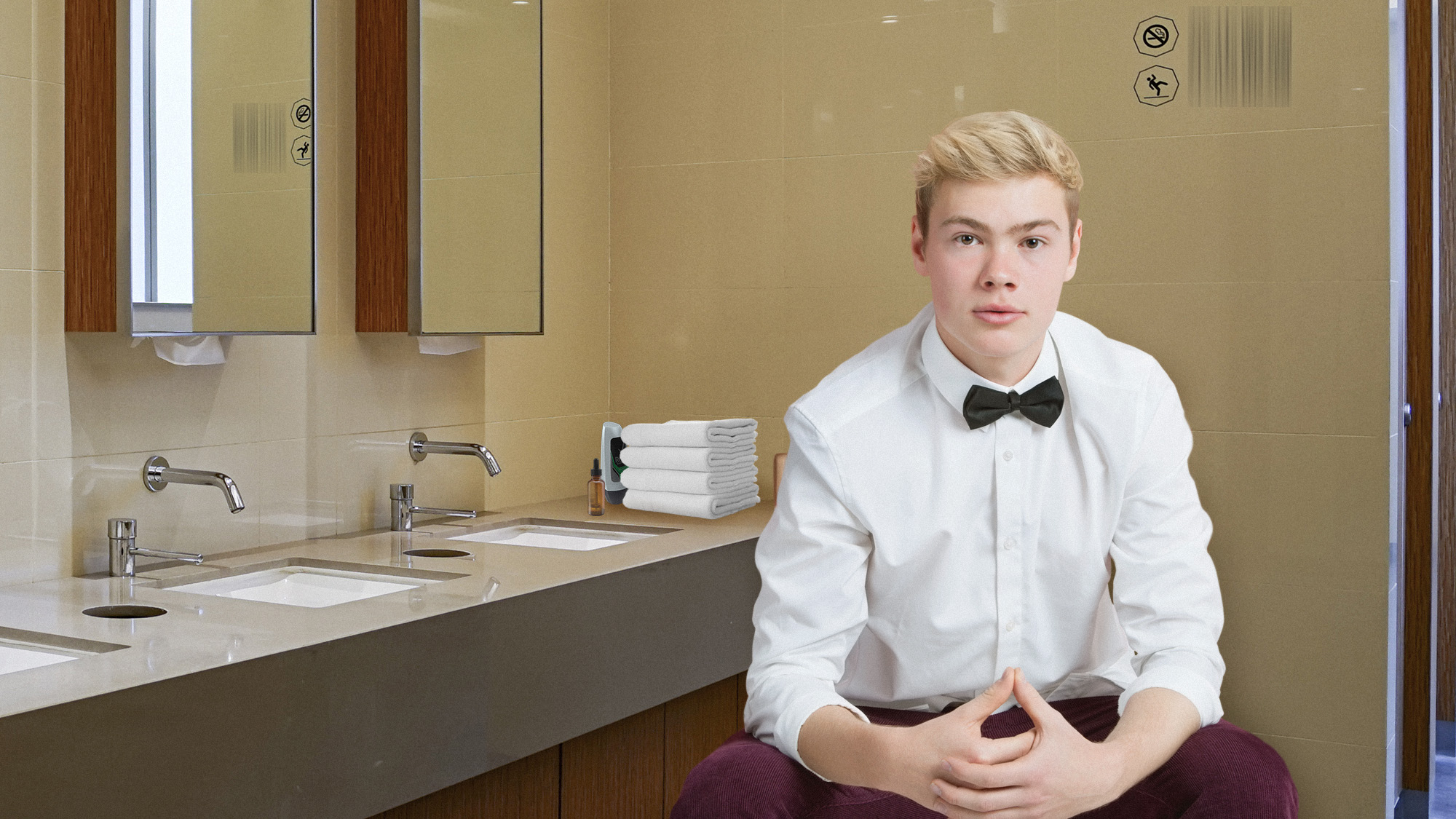 Here’s how you can tell the difference between the real deal and a guy who’s just doing it for kicks.

1. He’s in a single-occupancy bathroom: If the bathroom is only designed for one person but there’s a smiling man waiting there to assist you when you step inside, greeting you with a hearty “Welcome to the party, bro!” then he is almost certainly just there in a recreational capacity. The same goes for bathrooms at retail establishments like Office Depot and LensCrafters, where there would never be a bathroom attendant under normal circumstances.

2. All his supplies are clearly just random shit he found lying around his apartment: If the bathroom attendant is giving you a well-used bar of Lever 2000 instead of proper hand soap, or old Wendy’s napkins instead of paper towels, that’s a pretty telling indicator that the guy’s not on payroll. Also, keep an eye out for lackluster cologne options, as professional bathroom attendants usually keep a good stock of nice designer fragrances. If he’s spraying Axe in the air like champagne while yelling “I’m gonna live forever!” or if he has a dusty bottle of Michael Jordan cologne from 1996 that he refers to as his “vintage reserve,” be wary.

3. He rolls up with his crew: Any time the bathroom attendant has four or five of his boys with him, and they’re all throwing back shots and being rowdy while at the same time helping you freshen up, chances are it’s not sanctioned by the club’s management. It’s most likely that you’re just dealing with a dude who loves wildin’ out in the bathroom with his buds and making sure people he’s never met use soap.

4. He seems very confused when you try to tip him: Real bathroom attendants depend on tips to make a living, so if you try to give an attendant a dollar and he says something like, “No, no, it is I who should be tipping you,” before giving you a dollar of his own, you should take that as a sign that something’s up. If someone’s doing the job for fun, just the privilege of being in a public restroom all night long is the only compensation they need.

5. He pretends he’s just a normal patron with terrible diarrhea whenever an employee walks in: If an attendant’s reaction to seeing a club employee walk into the bathroom is to immediately yank his pants down, bolt into an open stall, and start theatrically convulsing on the toilet while making extremely loud diarrhea sounds with his mouth and shouting “Oh god, oh god, I’m shitting hot lava all over the place!” that is the behavior of someone who knows they’re not supposed to be there. They’ll do whatever it takes to avoid getting caught so they can keep offering strangers breath mints and condoms all night long, which to them is the ultimate high.

6. He keeps trying to bum cigarettes off of people: Professionals know better than to do this.

7. He seems to be having an absolute fucking blast: Let’s face it, being a bathroom attendant isn’t a very glamorous job, and if someone looks like they’re having the time of their life doing it, that should raise a red flag. A real bathroom attendant probably won’t cheer and clap every time someone starts taking a leak, and he definitely won’t ask people to take a selfie for his Insta immediately after or shout “Worldstar!” as he films them washing their hands. He won’t refer to sitting on his stool as “chilling in VIP,” and he definitely won’t try to form a two-man conga line with you and follow you into the stall. In most cases, he’ll just quietly sit there and offer people paper towels as they exit. Any bathroom attendant who chants for people to chug when he gives them mouthwash is probably not someone who’s on staff but rather just a guy whose idea of living it up is lurking in public restrooms and helping people he’s never met wash their hands. And while he may be a bit off-putting, as long as he’s not hurting anyone, you might as well just let him have his fun.