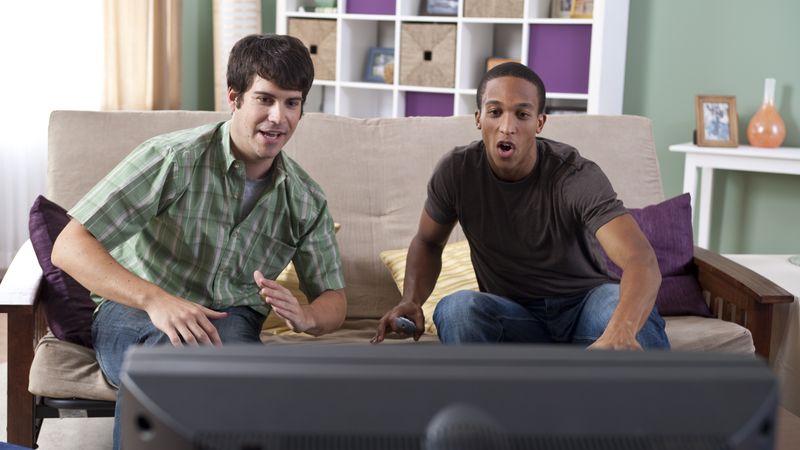 Only keep reading if you’ve made it past season three!

1. The big reveal that all of seasons one, two, and three took place in a reality where the Falklands War never happened: Ever wonder why you’ve never seen a show where the Falklands War is mentioned in seasons one to three? Anyone who has ever marathoned a show knows that it’s because season four is when it’s revealed that everything you’ve watched up to this point took place in an alternate timeline where Margaret Thatcher never sent British troops to take back control of the Falkland Islands from the Argentinian junta.

2. Here comes Big Martha!: With big loaves of French bread under her arms, curlers in her hair, and that big, toothless grin, Big Martha always shows up out of nowhere in season four to cheer everyone up after the cliffhanger ending of season three.

3. They drink water: Season four is the season where all of the characters finally enjoy a glass of this important beverage.

4. It’s a boy!: Finally, in season four, the baby is born. Every character gathers for an emotional scene in the hospital where they take turns delivering the baby, each shouting, “Bienvenido, little man!” and then carefully putting the baby back in the womb for the next character to deliver.

5. At some point in season four, all the characters sit down and watch the pilot episode: There’s no mistaking it—sooner or later, one of the characters will find season one of the series on DVD and spend the rest of the episode watching the pilot.

6. Your remote lights up and vibrates uncontrollably: If you’ve ever reached the fourth season, you’re just waiting for your remote to light up and vibrate so raucously that it’s impossible to keep it on any surface other than the floor or in a small cage as soon as the first episode starts. This goes on until the fourth-season finale, so have some extra batteries on hand!

7. Every character upgrades their version of Adobe Acrobat: You can’t spend four TV seasons running an old, outdated PDF reader! If you look closely enough at every character’s computer, you’ll see that they’re running a new version of Acrobat in season four.