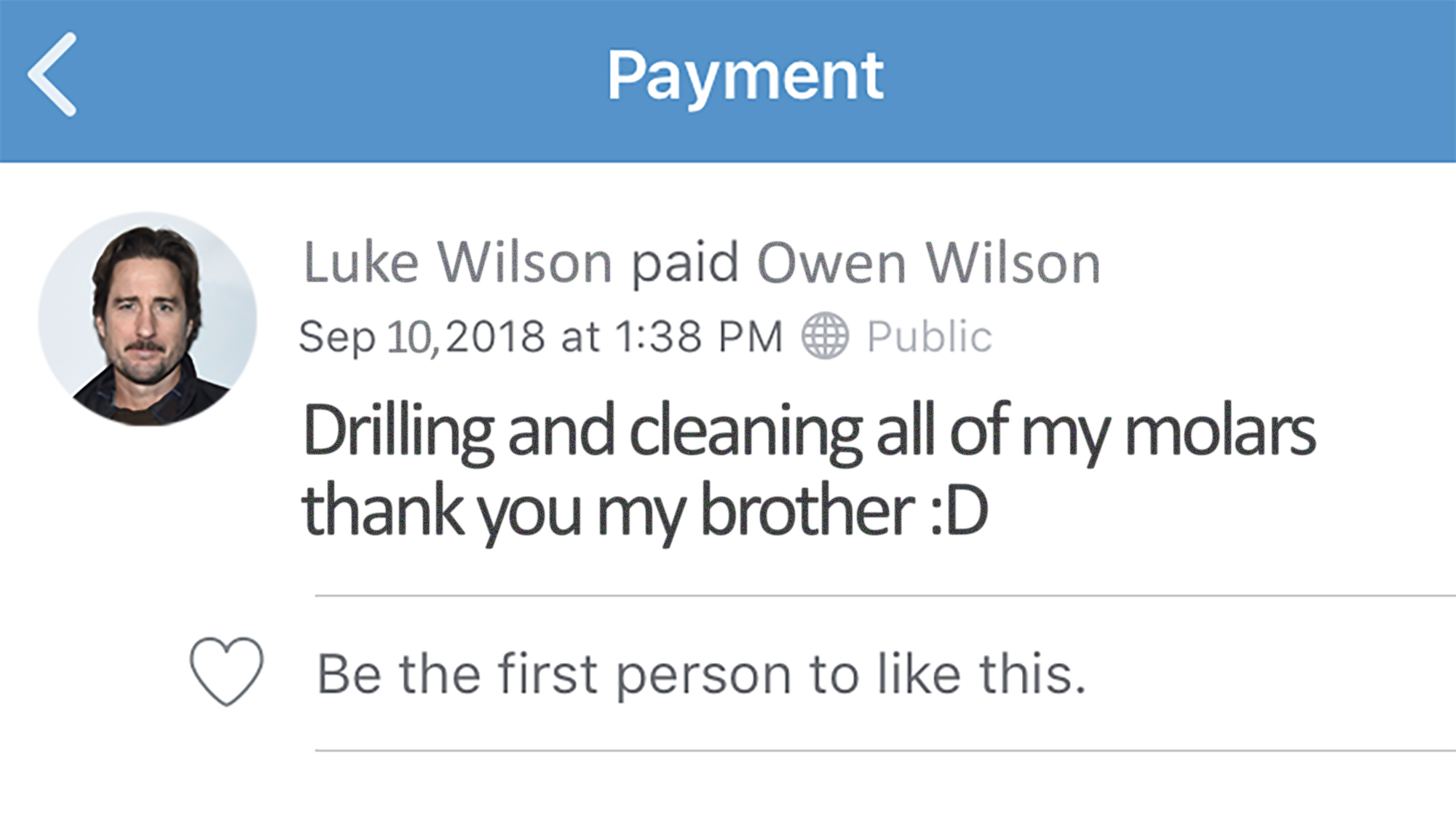 Luke and Owen Wilson may be most well-known for their acting, but a cursory look at their Venmo feeds suggests that they’ve been up to a whole lot more than just movies. Here are seven Venmo transactions that make it seem like the two brothers have been practicing dentistry on each other.

At first glance, you might just think this is some sort of silly inside joke between brothers. But taken in the context of the rest of their Venmo transactions, it’s pretty clear that this is referencing an actual occasion in which Owen Wilson stuck his fingers into the mouth of his brother Luke Wilson and then flossed his teeth.

2. The time Owen requested money from Luke with a bunch of mouth-related emoji

A couple days after the “brotherly flossing” payment, Owen sent Luke a payment request with the following description: [GFX: mouth emoji, tongue emoji, doctor emoji, sick emoji, money tongue emoji, smiling with teeth emoji]. Emoji always leave some room for interpretation, but taken together, these ones definitely seem to indicate that some dental work between brothers has taken place, and that Owen expects Luke to compensate him for his services.

3. The time Luke paid Owen for something called “mouth nightmare! (from you to me)”

On its face, this caption sounds like it’s referencing something upsetting, but upon closer inspection, the exclamation point makes it seem like whatever happened might’ve actually been a positive experience. Either way, Luke definitely paid Owen for something mouth-related.

4. The time Luke paid Owen for “drilling and cleaning all of my molars thank you my brother :D”

Now this one’s pretty straightforward. Sure, drilling and cleaning could also be house-related, but taken in context with the rest of these transactions, it’s pretty much impossible to ignore that this is about the Wilsons practicing dentistry on each other.

5. The time Luke paid Owen for “tooth and more”

Whatever the “more” in this transaction is supposed to be is anyone’s guess, but it seems safe to say it’s probably something that has to do with dentistry. These guys just really love to do dentistry on each other, it seems.

No ambiguity here. The Wilson brothers are very obviously practicing dentistry on each other, and it looks like they may even be opening a private practice.

7. The time Luke paid Owen with the following message: “Dear Brother Owen, My teeth are but putty in your dentist-like hands. –Sincerely, Luke W.”