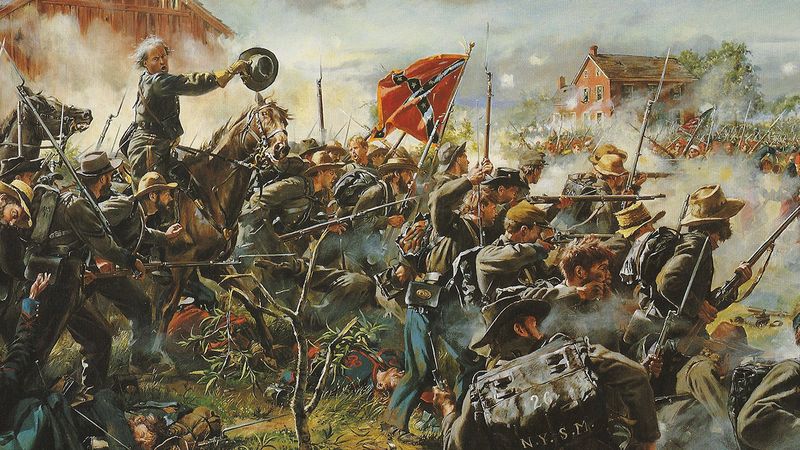 Throughout history, military leaders have relied on battle cries to rouse and inspire their troops before a crucial attack. Here are some of the most memorable pre-battle messages.

The legendary general Flavius Belisarius was known to delay battle for days before suddenly calling to his troops, “Okay, God isn’t looking anymore! Quick, kill them now, while He isn’t watching!”

2. Spartan Army: “Everybody aim for that one guy on the left!”

The Spartans would yell this as they stormed across the battlefield, focusing the entirety of their military might on decimating one guy on the left. Once the enemy army saw what kind of savagery the Spartans were capable of collectively inflicting on that one unlucky soldier, they often surrendered.

The Confederates’ practice of shouting the names of all the generals who had died up to that point in the Civil War before they charged into battle was later considered one of the major reasons they lost.

4. Carolingian Army: “Remember, be sure to take your sword out of the sheath before fighting!”

Known for their fairness and honor in fighting under the command of Charlemagne, these considerate Franks always reminded their enemies to unsheathe their weapons prior to fighting.

Before charging into the Battle of Gisors in 1198, Richard the Lionheart is said to have shouted this legendary rallying cry, which loosely translates to “God, please invent tanks right now,” as he’d just come up with the idea for tanks but knew that the technology wouldn’t be available to build them for at least a few centuries.

Using this fearsome battle cry, Mongolian conqueror Genghis Khan led his army on a bloody rampage across Asia and Europe.

Centuries of research have revealed that in every war since the dawn of human civilization, there has always been at least one guy screaming “For Beverley!”

U.S. Air Force pilots have been screaming this at the top of their lungs while flying into battle since World War II.