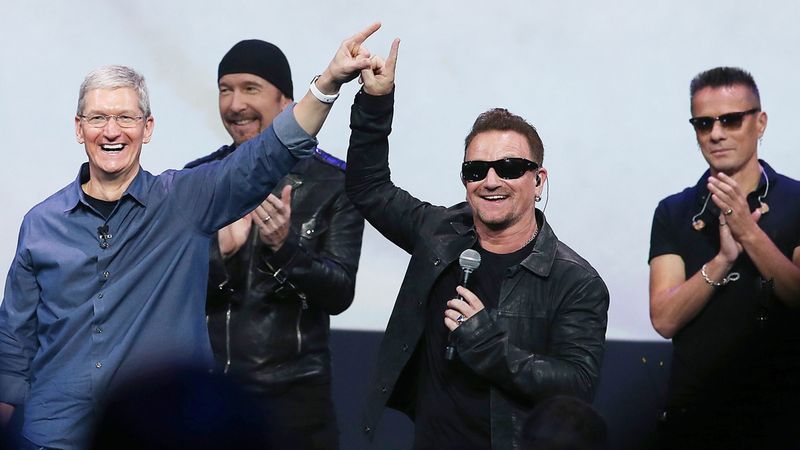 Apple users across the world woke up today to find U2’s latest album, “Songs Of Innocence,” already in their iTunes library, in what’s being dubbed “the largest album release of all time.” Here’s a look at some of the most innovative ways other artists have released albums in the past.

Famous for breaking the mold, the rapper/producer put 750,000 copies of this album in vacuum-sealed containers and hurled them into the Indian Ocean in summer 1998. They began washing ashore in 2013, delighting fans and critics alike.

Instead of going the predictable route with the release of their debut album, this sister group partnered with Burger King to put a copy of their CD between the two beef patties on every Whopper for an entire month!

Though commonplace now, Radiohead’s “pay what you owe” strategy, in which customers each paid exactly $15.99 for the album, was considered groundbreaking in 2007.

Adele’s 2008 debut album was famously distributed entirely door-to-door by an elderly man who claimed he was Adele but clearly wasn’t.

In perhaps the most seismic music event of last year, Queen Bey quietly released her self-titled album on Dec. 13, 2013, exclusively through BigTimeJamz.net, the digital media retailer that the singer launched as a “one-stop shop for big-time music fans to connect with big-time jamz.”

6. The Mars Volta, Frances The Mute

Until cassettes won the format wars in the early ’80s, a multitude of bands innovated the record release process by carving spiral grooves into racetracks and hiring pro stock car drivers to drag a giant needle repeatedly around the oval.

For his third studio effort, the L.A. rapper/producer employed the unconventional method of delaying the album for more than a decade and never releasing it.