A Beautiful Friendship: 4 Times Koko The Gorilla Signed To Robin Williams That They Should Totally Do A Movie Together And He Kind Of Just Tried To Laugh It Off But She Would Not Let The Topic Go 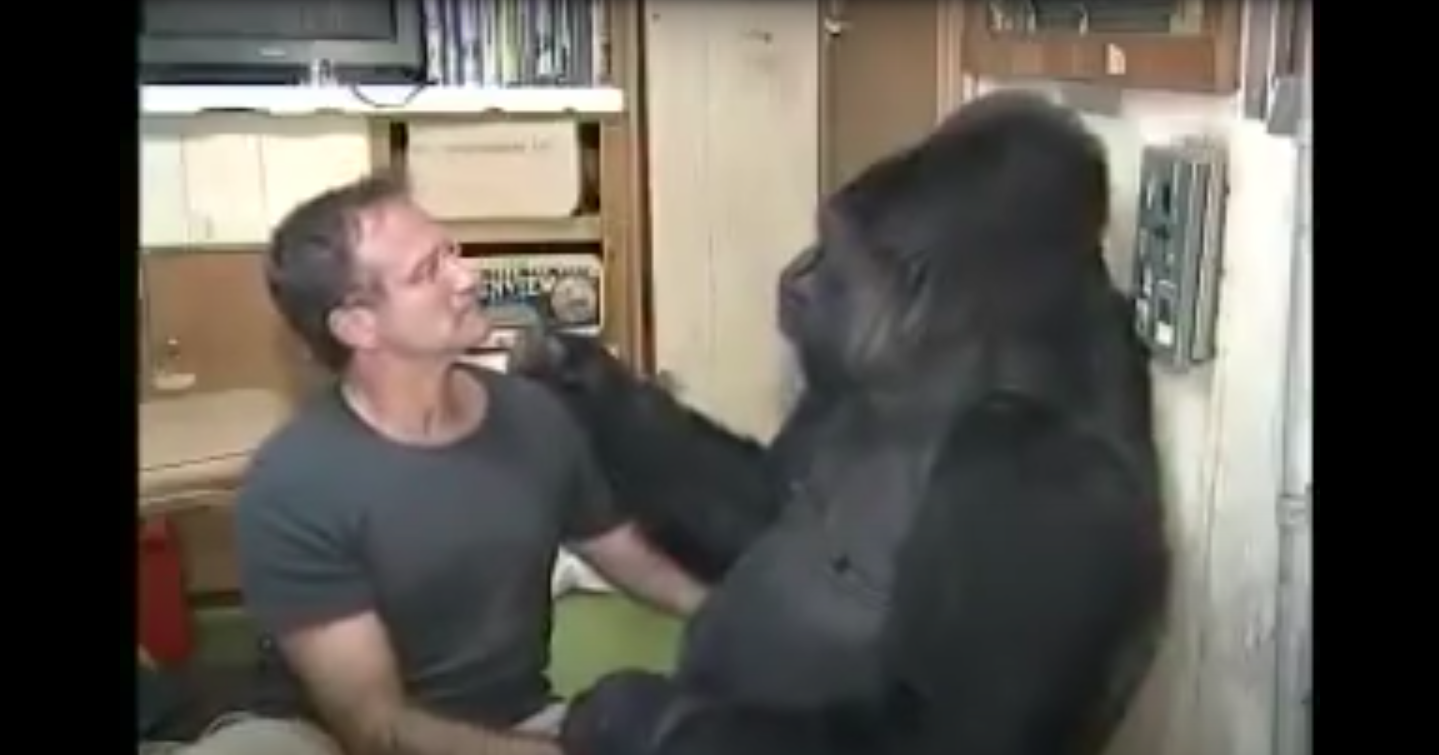 When Robin Williams met Koko the gorilla in 2001, the two instantly forged a heartwarming connection. However, Koko started making things kind of awkward shortly thereafter. Here are four times Koko the gorilla signed to Robin Williams that they should totally do a movie together and he kind of just tried to laugh it off, but she would not let the topic go.

When Koko asked to be in a Mrs. Doubtfire sequel within two minutes of meeting Robin Williams, and Robin signed back, “You’re awesome!”

The soul-level friendship Koko and Robin Williams formed when Williams arrived at The Gorilla Foundation in California was obvious as soon as they met, when an expression of deep peace and joy spread over Koko’s face and she signed “so happy.” But it wasn’t two minutes before Koko began brushing off Williams’ hugs and jokes to sign “KOKO IN ROBIN MOVIE. KOKO BIG ROLE.” After hearing the translation, Williams laughed off Koko’s comment, saying “Sure, Koko! You’d be the best co-star I’ve ever worked with!” You could see Koko excitedly internalize his response as she used her hands to make the signs for “WHEN?” and “MONEY?” and “KOKO WEAR WIG.” Realizing he didn’t have an answer for her, Williams just gave her a playful high-five. But handlers say they saw Koko signing “KOKO DO MOVIE” to herself for hours after Robin left, and she would remain fixated on the idea for years to come.

When Koko asked Robin Williams to call his agent on the spot and he pretended make a phone call on a banana as a bit, but Koko smashed it and demanded a real meeting

Koko and Robin didn’t meet again for an entire year, but when they did, it was clear that Koko still had a movie collaboration on her mind. Though the two began their second visit playing with some of Koko’s stuffed toys, the highly intelligent gorilla quickly became disinterested and began banging her fists violently on the floor and signing phrases like “ROBIN WILLIAMS MAKE KOKO STAR” and “KOKO WANT DO ROMANCE SCENE.” Koko then signed for Williams to call his agent on her behalf, after which Williams playfully held a banana to his face like a phone, adopted a wacky Irish accent, and said, “Hey, Mr. Agent? I think I’ve got a new client for you, and her name is Koko! We’re going to walk the red carpet together like big stars!” Unfortunately, this failed to placate Koko. She grabbed the banana and smashed it in her enormous fist before signing “THIS NOT JOKE” and “LIGHTS, CAMERA, ACTION.” She then unleashed a thunderous roar and beat her chest while staring menacingly at Williams. Visibly uncomfortable, Williams then said, “Okay, Koko, calm down, I will talk to my agent for you,” before nervously backing away.

Williams probably thought he no longer had anything to worry about when he showed up at the Gorilla Foundation six months later for a benefit event, but Koko was more excited than ever at the prospect of working with him. But within moments of arriving at the event, Koko spotted him and bolted across the room to greet him, hooting wildly. Donning a feather boa and clutching a wadded up stack of papers covered in crayon scribbles that she referred to as her “movie script,” Koko cornered Williams and began emphatically signing “CONTRACT NOW” at him and gesturing at the pen in his pocket and flinging her boa over her shoulder in a diva-like manner. Williams tried to treat the whole interaction like a game, goofily laughing off the enormous gorilla’s demands, but this only got Koko more riled up. She flipped over a table of hors d’oeuvres and sign-screamed “YOU PROMISE KOKO BE STAR” before ripping her “script” in half, angrily departing through a nearby window, and barreling off in a blind rage into oncoming traffic.

Koko remained fixated on becoming a movie star for the remainder of her life, frequently mailing Williams unmarked VHS tapes of her dramatically reproducing monologues from famous films in a combination of sign language and loud, expressive grunts. At the end of each video, Koko would hold up a poorly typed CV titled “KOKO JOBS” with a crude drawing of herself that she seemed to think counted as a headshot. Unsure what to do, Williams politely acknowledged each of Koko’s tapes by sending her tapes of himself performing silly gorilla impressions. This, however, only encouraged Koko to send more audition tapes, including one containing an interpretation of the “Always Be Closing” speech from Glengarry Glen Ross in which she stormed around her enclosure gesturing wildly at the baffled researchers she’d enlisted as extras in the scene, after which she then went off script and improvised prolonged, upsetting death scene. After receiving this video, Williams decided to stop responding to her—it was all just making him too uncomfortable.

Sadly, neither Koko nor Williams is with us any longer, and so Koko’s dream of a joint movie project will never be realized. But it is beautiful to remember the amazing friendship these two shared, which will continue to inspire us all to love and respect all the species with which we share this planet.