A Historic Tradition: President Obama Has Been Added To The White House Portrait Of Every Former President Sitting Together In A Sauna 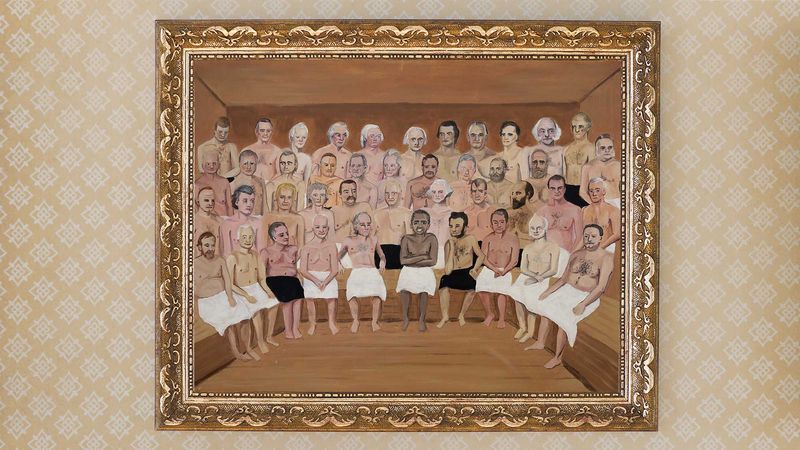 As his second term in the White House draws to a close, President Barack Obama will no doubt reflect upon his legacy as our nation’s 44th commander in chief. Fortunately, a run that began on such a historic high note will end on another prestigious achievement. President Obama has just been added to the White House portrait of every former president sitting together in a sauna.

What a momentous occasion!

Originally commissioned in 1776 by the famous portraitist Gilbert Stuart, the work began as a depiction of George Washington relaxing alone in a sauna with his legs stretched out. John Adams was added taking a load off a few years later, a few rows above him. The inaugural poses required the men to sit shirtless for two days, but it set the tone for the impressive detailing that has made this one of the most time-honored traditions in the White House. Obama’s first look at his depiction in that steamy, oaken room is a moment he is sure to cherish for the rest of his life.

No matter how divided the country is now, this collection of presidents with very different viewpoints and philosophies all getting a steam together is deeply inspiring.

The choices the 26 (and counting) different artists made as they added presidents are as telling as they are interesting: In a somber call made for William Henry Harrison in 1841 that has since become tradition, presidents who died in office wear black towels. Chester A. Arthur was originally depicted pouring water on the sauna rocks until a major tear in the painting prompted restorers to remove a few inches on the right side. And we may never know if the artist who painted Andrew Jackson made him look flushed and overheating as a subtle protest to Jackson’s treatment of the Cherokee, but for now the newest addition is nothing short of amazing: our first black president, having a shvitz with Lincoln and Reagan and the rest.

Presidential Sauna remains one of the most treasured artifacts in the White House, and the inclusion of Barack Obama shows just how far our country has come. Hopefully some day soon, a woman will be added to the adjacent, currently empty, painting of a woman’s sauna. But as the current term comes to an end, we salute this fitting send-off with a renewed hope for what’s possible.