A Piece Of History: The Species Of Invasive Snake That Outcompeted JFK For Vital Resources Like Physical Space And Nutrients Is Coming To The Smithsonian 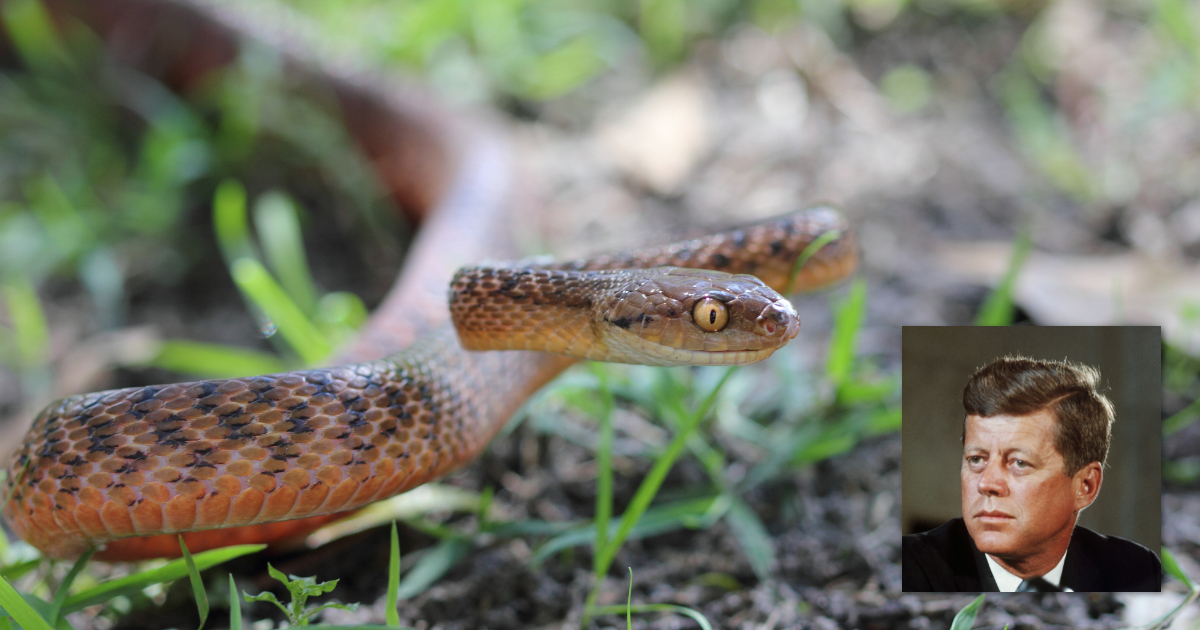 Few events have so deeply grieved our nation as the untimely loss of President John F. Kennedy, and a new museum exhibit is setting out to give Americans a fuller understanding of the culprit behind that terrible tragedy: The species of invasive snake that outcompeted JFK for vital resources like physical space and nutrients is coming to the Smithsonian.

Wow, this is going to be a must-see for anyone with an interest in American history!

Starting this November, visitors to the Smithsonian will be able to take a close-up look at the Brown Tree Snake, a non-native species of arboreal snake that tragically cut the 35th president’s term in office short by edging him out of the heavily wooded areas that made up his natural habitat. In the entrance to the exhibit, placards bearing detailed research from leading JFK scholars and herpetologists will give museum-goers the context they need to appreciate just how thoroughly the snake’s accidental introduction from the South Pacific disrupted the ecological niche JFK had occupied, with photos of a happy and healthy JFK scampering across the forest floor grimly foreshadowing the events to come.

Once visitors are fully grounded in the backdrop of the early 1960s, the exhibit will pull no punches explaining how the booming snake population quickly deprived JFK of the rock crevices and hollowed-out logs he had previously relied on for shelter from predators and the elements. A documentary feature playing in one corner of the exhibit will use a mixture of archival footage and modern CGI visualizations to demonstrate the way in which the Brown Tree Snake’s highly efficient predation on bird eggs and small amphibians left JFK severely malnourished from the loss of his primary food sources, and will feature gut-wrenching eyewitness testimony from people who observed the snake’s calamitous ascent to ecological dominance firsthand.
You can’t help but wonder what the world would look like today if these invasive snakes had never encroached on JFK’s habitat.

Of course, the centerpiece of the exhibit will be a glass terrarium containing a small population of live Brown Tree Snakes, allowing visitors to lock eyes with the creature that heartlessly brought down a beloved American head of state in his prime of life. Museum docents will be on hand to reassure any concerned guests that the snakes present very little threat to them now, emphasizing that JFK succumbed not to outright predation by the snakes but rather to the environmental stressors resulting from increased competition for resources.

The exhibit will also briefly touch on the political aftermath of the woodland ecosystem’s disastrous upheaval by the snakes, such as Lyndon B. Johnson’s emergency swearing-in ceremony onboard Air Force One once JFK was officially declared extinct six months after his last verified sighting in the wild. A series of diagrams will show how Texas Governor John Connally, who occupied the same ecological niche as JFK, managed to narrowly survive by adopting a herbivorous diet of ferns and acorns that avoided competition with the snakes. A handful of iconic artifacts from the tragedy will also be on display, such as Jackie Kennedy’s pink suit still covered in shed snake skin from crawling around the underbrush trying to locate her husband, as well as a brick from the now-demolished book depository that likely introduced the snakes by unwittingly receiving a shipment of books from Australia that a couple of the invasive reptiles got into before transit.

It looks like the Smithsonian has really pulled out all the stops for this one. We can’t wait to learn more about these infamous snakes once the exhibit is open to the public!
More posts in Lifestyle »