After 55 Years Of Research, Jane Goodall Shares Her 6 Most Fascinating Discoveries About Chimpanzees 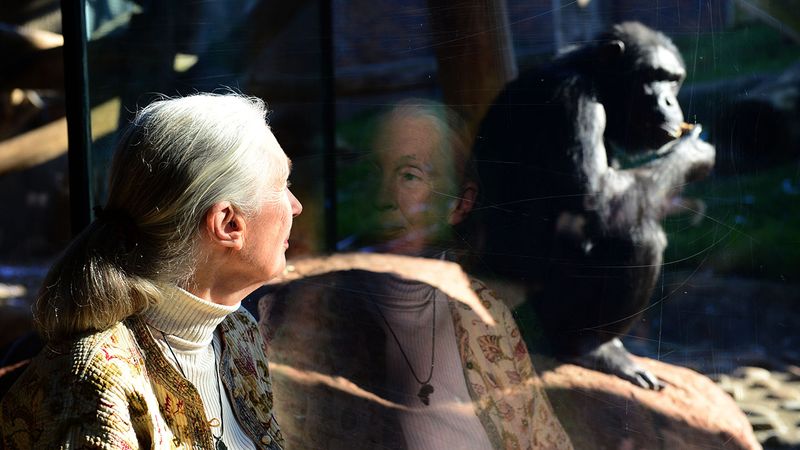 Jane Goodall has dedicated her life to studying primates, and the insights she has gained into our evolutionary ancestors are truly powerful. Prepare to have your breath taken away by Dr. Goodall’s words.

1. Chimps will betray their own to get their hands on Italian food: “As with all chimps, the ones I studied in Gombe were absolutely obsessed with Italian food and would go to extraordinary lengths to get their hands on some. One day, the troop’s alpha male, whom I called Goliath, managed to acquire a plate of linguine. Humphrey, a younger male, saw Goliath’s linguine and became incredibly jealous. He offered to give Goliath his most prized possession—a vacant hornet nest that he enjoyed having sex with—in exchange for the linguine, but Goliath declined, as he already had a hornet nest of his own. Desperate to eat the linguine, Humphrey threw some pebbles to divert Goliath’s attention, then snuck up behind him and ripped his head off, allowing him to take the Italian food from his superior. It was a gruesome yet utterly fascinating scene.”

2. When chimpanzee communities encounter a Japanese researcher, they will try to put them in jail: “My colleague, Dr. Kiyoshi Yamamoto, discovered this when chimps dragged him from his tent in the middle of the night down to the local prison. The apes would then approach the town’s sheriff with their hands out, expecting a food reward. It was truly shocking to learn that chimpanzees are capable of such things. Nature is not always pretty.”

3. Most chimps can vocalize the phrase “oh no”: “They like to yell it while they defecate.”

4. Chimps don’t like it when you blow up one of their family members with a grenade: “One of my young researchers, Sofia Manfredi, discovered this after rolling an active grenade into a ditch where several male siblings were sharing a lunch of termites and soup. The grenade exploded the youngest one into a red mist of viscera and bone, and, curiously, the other brothers seemed to become rather disheartened.”

5. Chimps revere hippos: “When they become aware of a hippo in the vicinity, chimps stop whatever they’re doing and take turns honoring the beast. They bring offerings of plump salamanders, crushed soda cans, and other treasures they’ve found in the dirt, and they join together in an angelic chorus of growls to soothe the hippo. New mothers will rub their infants against the hippo’s groin to bless them with his virility. The troop’s elders will break off their incisors with a rock and fashion a crude crown of teeth for the hippo to wear. If the hippo becomes aggressive towards them, they do not resist; in fact, it is an honor for them to be crushed by the hippo, and they will often place their heads on the ground next to his hooves in hopes that he might accidentally stomp their skulls flat.”

6. If a chimp dunks its head into a bucket of horchata for an hour, it will die: “Whenever chimps discover a large pail of horchata in the forest, the eldest female of the group will approach it and slowly lower her head into the liquid, remaining there for an hour or more until another chimp yanks her out of it. It was fascinating to observe the way their social structure altered afterwards, with the next eldest female unfailingly rising up to lead the group’s children in licking the sweet rice milk from their deceased matriarch’s body.”