An Oral History Of ‘Friends’ 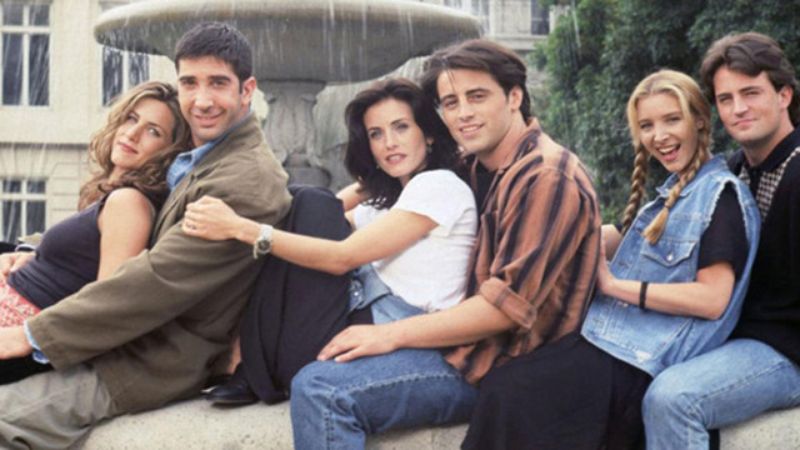 In 1994, writing partners David Crane and Marta Kauffman pitched a sitcom to NBC about a group of single twentysomethings living together in Manhattan. Their seven-page treatment would go on to become ‘Friends,’ a television phenomenon that was nominated for 62 Emmys, catapulted six relatively unknown actors to international fame, and is generally considered to be one of the best sitcoms of all time.

Now, over a decade after the series ended, the cast has come together to describe what it was like to be a part of broadcast history.

Chapter 1: The One Where Everything Started

David Schwimmer (Ross Geller): When my agent handed me the script, I immediately loved it. It was about Ross Geller, a man who was deeply obsessed with dinosaur bones. We enter into his life at a time when his obsession has reached its dangerous peak, and he is living and working in New York City as a professor of paleontology.

Lisa Kudrow (Phoebe Buffay): The concept was like nothing I’d ever seen before: a group of young friends living in New York City, just trying their best to pull this tortured man named Ross out of his cursed, solitary world. They can either let him descend into his own delusions, or they can force him to hang out at a coffee shop until he comes to his senses.

David Schwimmer: To me, the bones represent Ross’ tortured past, which he cannot seem to escape. In order to cope with those harrowing memories, he tries to date every woman in Manhattan.

Lisa Kudrow: It just felt fresh and totally unique. All the other ensemble shows at the time were called Seinfeld, and none of the leading roles were open. This had a bunch of young, hungry characters just trying to get by, but weren’t named Jerry, Elaine, Kramer, or George.

Courteney Cox (Monica Geller): I actually originally auditioned to play Rachel, but they decided to cast me as Monica because they needed someone beautiful, but also not someone Ross would ever kiss.

Jennifer Aniston (Rachel Green): Even during our auditions, the producers were really willing to put a lot of our own lives in the show. Back in 1998, my name was Rachel, I had just run away from my own wedding, and I was very physically attractive.

Matt LeBlanc (Joey Tribbiani): My character was originally not an actor, but when they saw that I was an actor, they made my character an actor too.

Jennifer Aniston: Also, most people don’t know this, but Rachel was originally bald until they saw my amazing hair. Really, I just handed over all my official documents and we were off.

Matt LeBlanc: I first met Jen right after our audition. I just took one look at her and I knew: This one’s going to be a star. There was something about her that made me positive she’d be huge. Also, I knew that Malaysia Airlines Flight 370 would disappear in March 2014.

Courteney Cox: Matt was just such a perceptive guy—he was always looking into the future, and every single one of his predictions came true.

Matt LeBlanc: I knew 370 would get struck by lightning before nosediving into the ocean, I knew Princess Diana would get killed the second she hopped in that car, and I knew that Jen would outdo us all by winning that Emmy. I also knew that her marriage would fall apart and that she would be dead by 50.

Matthew Perry (Chandler Bing): No matter how big any one person got, though, Friends was an ensemble show. No one person was favored over the others, and if we felt that it was happening, we understood why it was the case and decided it was smartest to ride with it.

Lisa Kudrow: We were friends on and off the set, and we’re all the godparents of each other’s kids, except for Jen and Matt Perry, because they are deeply, deeply barren.

David Schwimmer: We used to hang out together, and honestly, we still do. I couldn’t be luckier to have my best friends cast by a professional talent agency for me.

Chapter 2: The One Where They Got Famous

Although early episodes of ‘Friends’ received only average ratings and reviews, the show quickly rose to prominence, and with it, so did the stars. They had started out as relative unknowns, but the six series regulars soon ascended into the high-profile Hollywood world of paparazzi, product endorsements, and wealth.

David Schwimmer: I had dealt with fame a little bit before, just because crowds of people are naturally drawn to me, but nothing on this scale. Suddenly my face was on billboards and buses, and this time it wasn’t because I had been kidnapped.

Matt LeBlanc: My character probably would have loved being famous, but I did not. I think that’s why it was so easy to play him; if I had been exactly like Joey in every way, I wouldn’t have been acting.

Jennifer Aniston: When we started getting really big, I was lucky enough to have my husband [Brad Pitt] to lean on. Every day, he would come to the set, sit in the studio audience, and cheer my name over and over.

Courteney Cox: One day, Brad even stood up in the studio audience and, instead of yelling, “That’s my Jen,” yelled, “I want to play Jen.”

Brad Pitt (guest star, season eight): Friends was my favorite show at the time, and all I wanted to do was guest star as my beautiful, good-haired wife.

David Schwimmer: He brought a refreshing intensity to Rachel that we’d never seen before. Brad had just finished filming Ocean’s Eleven, so he insisted on holding a gun to my head in every scene.

Lisa Kudrow: God, we really did have everyone on that show. Haruki Murakami came on and played the long-lost seventh friend; Charles Manson guest-starred as Ross’ parents; Desmond Tutu replaced Gunther for an episode.

Justin Timberlake (guest star, season seven): I got to play a chair in Central Perk and I’ve never had a better role since.

Courteney Cox: Tom Selleck was one of the worst. At the end of each take, he’d shave off his mustache while the audience cheered and then wave goodbye to the cameras. We’d have to wait a month for him to grow it back and then shoot it all over again.

Lisa Kudrow: And one time, David even asked to guest star as a tall Jewish extra with intentions of making indie films, but no dice.

Matthew Perry: Normally, people would have been really receptive to that kind of thing, but not that day. See, David had arrived to the set late, because he had just gotten in from New York after taking an ambulance ride across the country.

Courteney Cox: I won’t lie; we all got so close, that, yeah, sometimes there was drama. When they wheeled David in on a gurney that morning, we realized something: David’s contract had health insurance, and the rest of ours did not.

Matt LeBlanc: He got dental and vision too.

Lisa Kudrow: We immediately went on strike. We wanted his health insurance taken off his contract and refused to shoot until that happened. We were all SAG, so if we don’t have health insurance, no one should.

Chapter 3: The One Where They’re Friends Forever

Although ‘Friends’ eventually came to a close in the 2004 series finale watched by 52.5 million viewers, the show lives on in the hearts and minds of everyone. It had a vast cultural impact that continues to grow even to this day.

Courteney Cox: The finale was a very touchy subject among the cast. We were shooting the scene where Ross runs onto Rachel’s plane and asks her to stay, but instead of saying, “I love you,” he kept saying, “I’m going to down this plane because I love you.”

Courteney Cox: The plan was to film two endings and go with whichever version tested better with audiences.

David Schwimmer: It came down to the wire, but we ended up nixing the ending where Ross knocks down the cockpit door and calmly states, “Now is the time for sea to consume us. Now is the time we will become immortal.”

Lisa Kudrow: It’s just crazy to think it’s been over 10 years since that episode aired and NBC escorted us off the set, you know? It’s a show that meant so many things to so many people.

Jennifer Aniston: To me, Friends is fundamentally about a man with nothing to live for but dinosaur bones getting the chance to live for something else. It’s not an easy journey, but luckily there’s a woman with good enough hair to distract him from his greatest weakness.

Matt LeBlanc: When these six friends first get together, they’re a lost group of twentysomethings. When they’re finally faced with the chance to part ways, though, they’re still lost, but this paleontologist is only slightly less unhinged.

Matthew Perry: It’s crazy—when I first started filming Friends, I was 12 years old. By the time we were done shooting the series, I was 56.

Lisa Kudrow: It was truly a pleasure to watch Matthew grow up. When I met him, he was just this spunky kid, and now he’s an elderly man rapidly aging each day.

Courteney Cox: I feel like I helped raise him, you know? What a journey it’s been.

David Schwimmer: For me, the show was ultimately all about the syndication. Syndication was something very personal to me, and I’m glad this show was brave enough to go there.

Lisa Kudrow: Nothing moves me more than knowing that, to this day, we are making money from syndication.

Matt LeBlanc: When we started this show, I predicted it would end someday. And guess what happened next?

David Schwimmer: On some level, you just can’t compare other shows to Friends. So we’re doing a reunion episode. It’s been shooting since the show ended in 2004, and we absolutely can’t wait for you to see it.